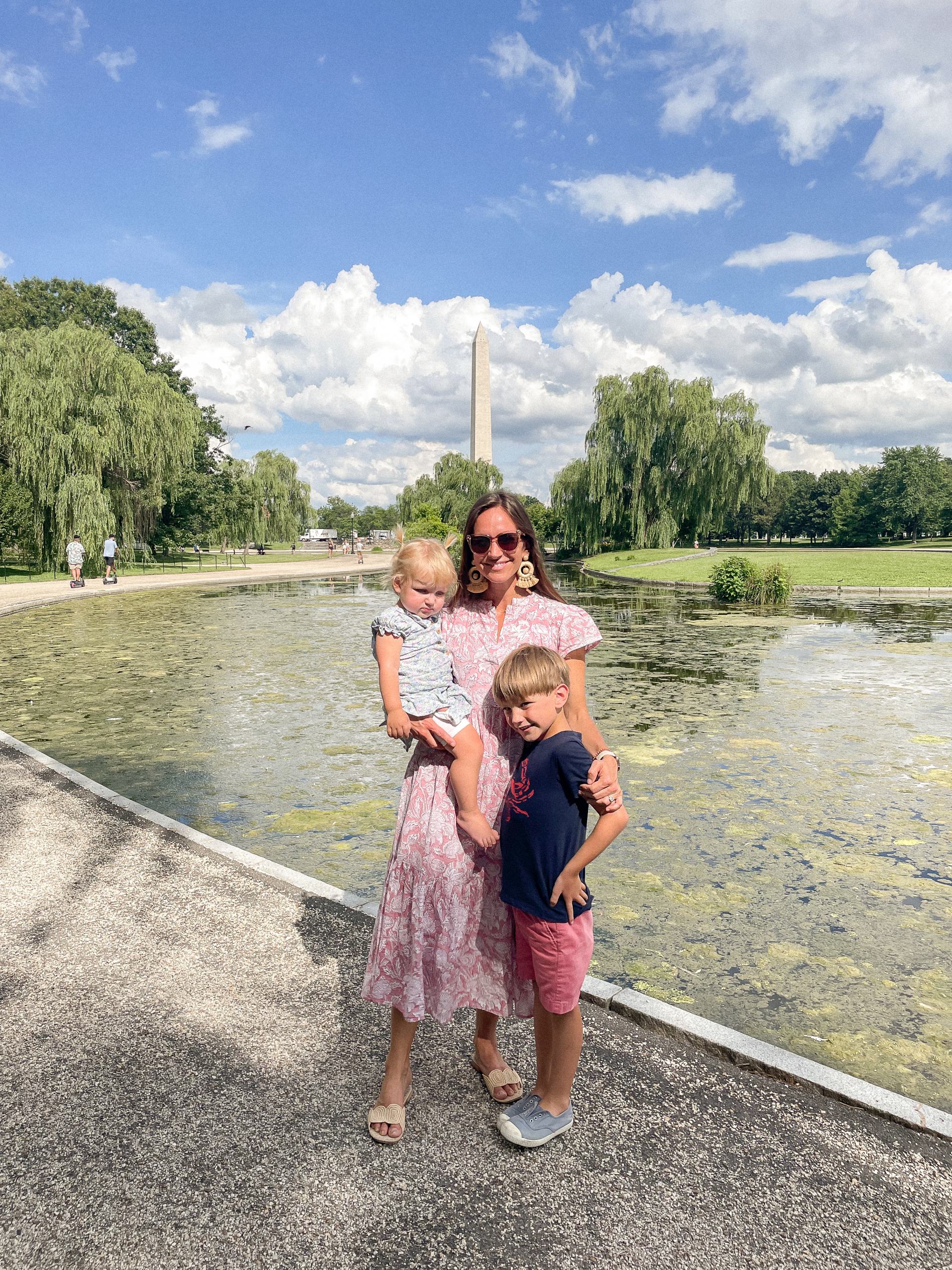 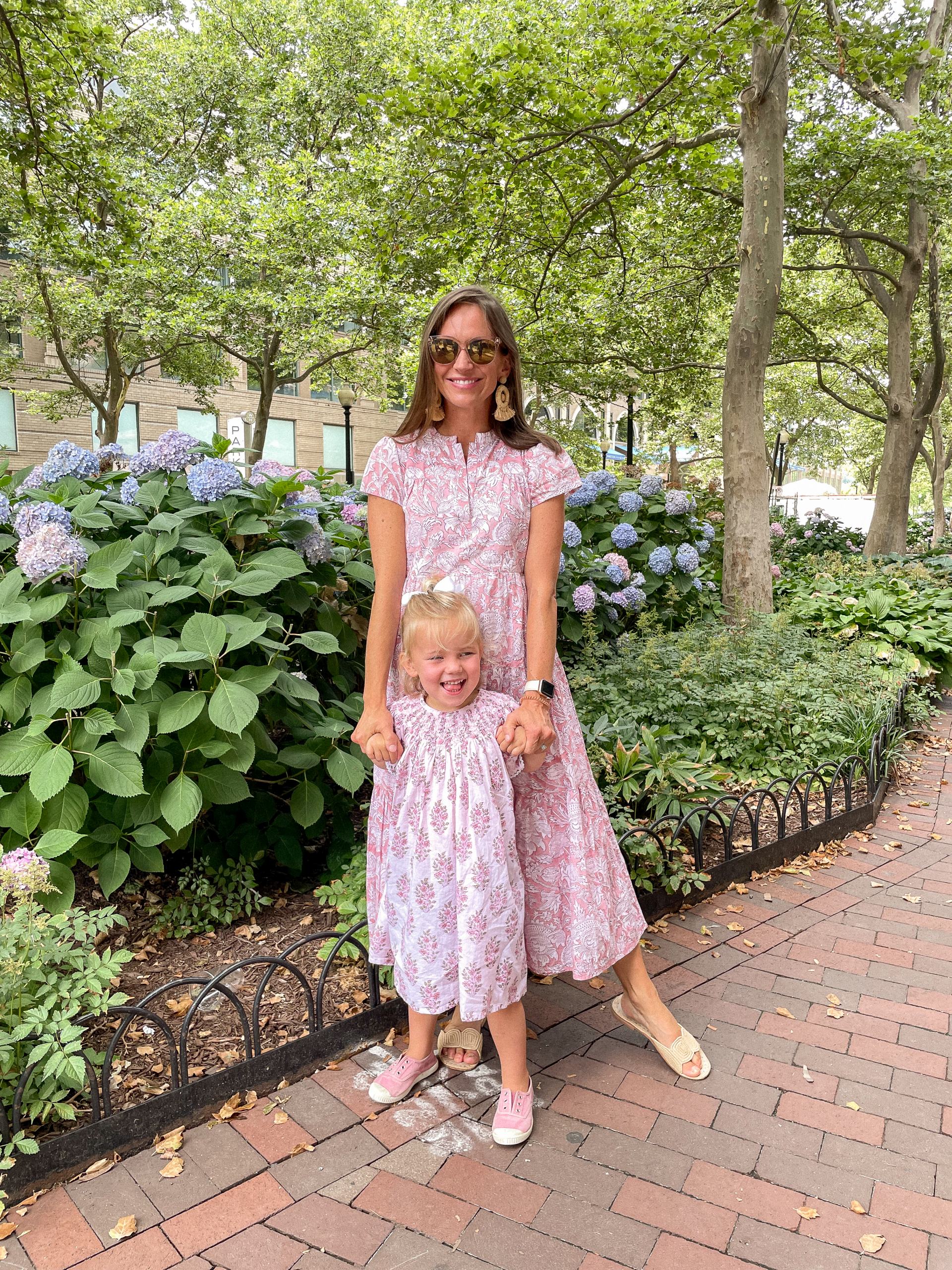 We live in Arlington just across the river from DC but we don’t get over to the District as often as we should.  With 3 little kids and a pandemic happening this past year we’ve spent a little time on the National Mall, normally in the middle of a run, but haven’t really ventured out very much.  This weekend we spontaneously decided to hop on the Metro (our local subway system here) and head on over for a day of wandering.  We loaded up our nearly 6 years old Uppababy Vista (with rumble seat and kickboard to accommodate all 3 children) and we took the Metro to Foggy Bottom, which is the closest metro stop to Georgetown.  It’s about a mile walk and it was nice to walk around the beautiful city on a sunny summer day with everything feeling relatively normal again.  I’d hoped that the water feature down at the waterfront park would be open for the kids to play in, but unfortunately it was not. 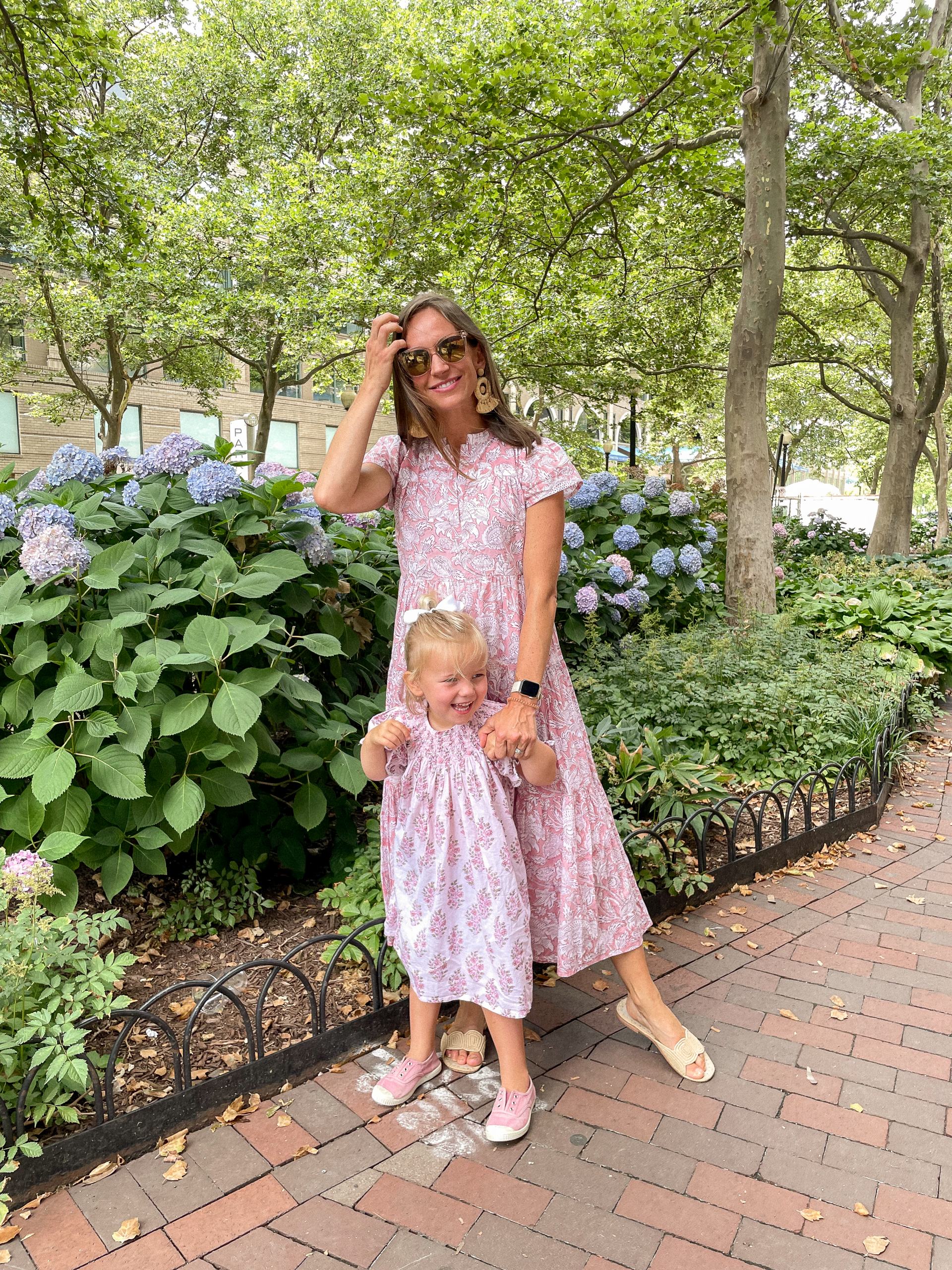 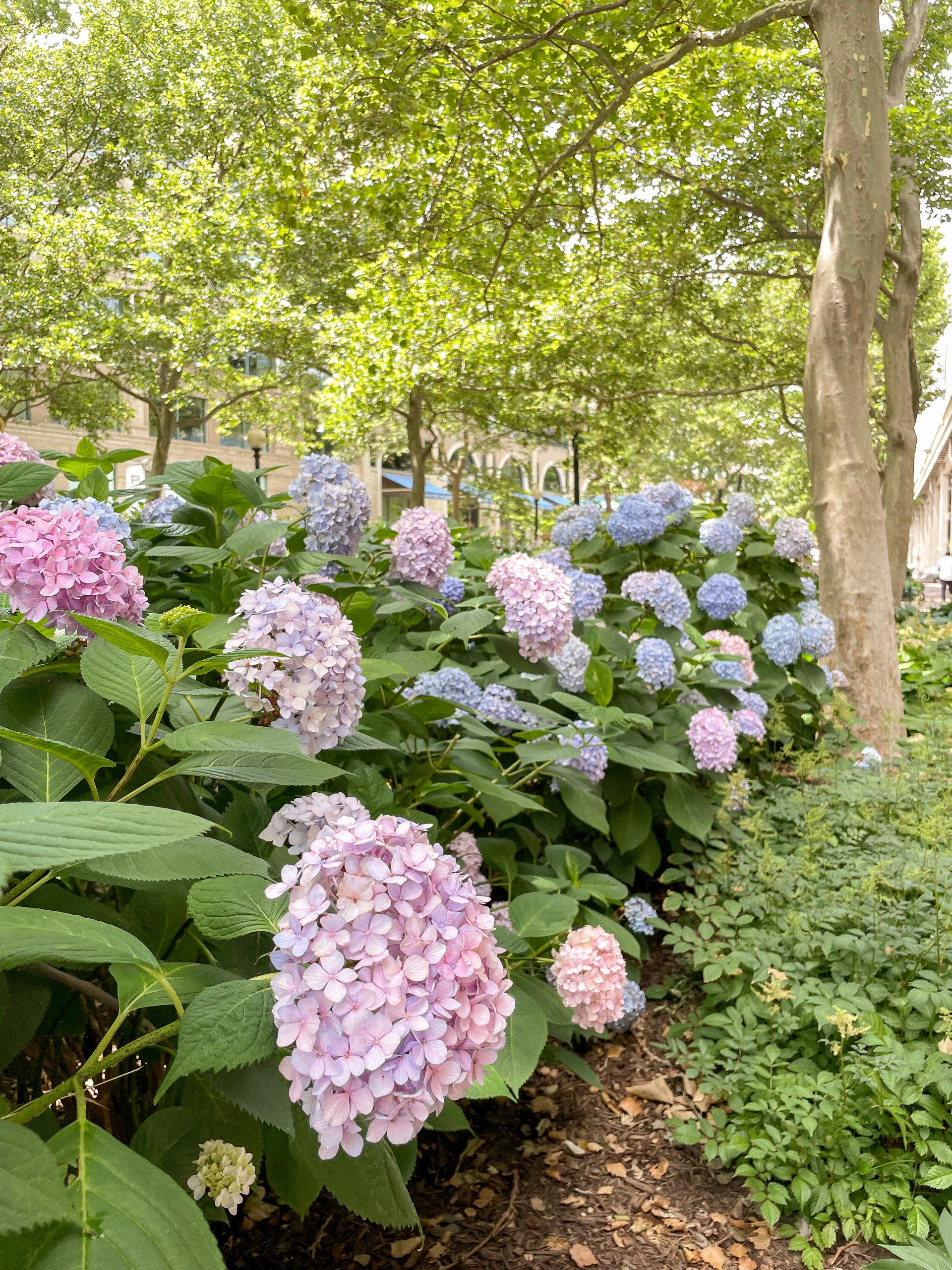 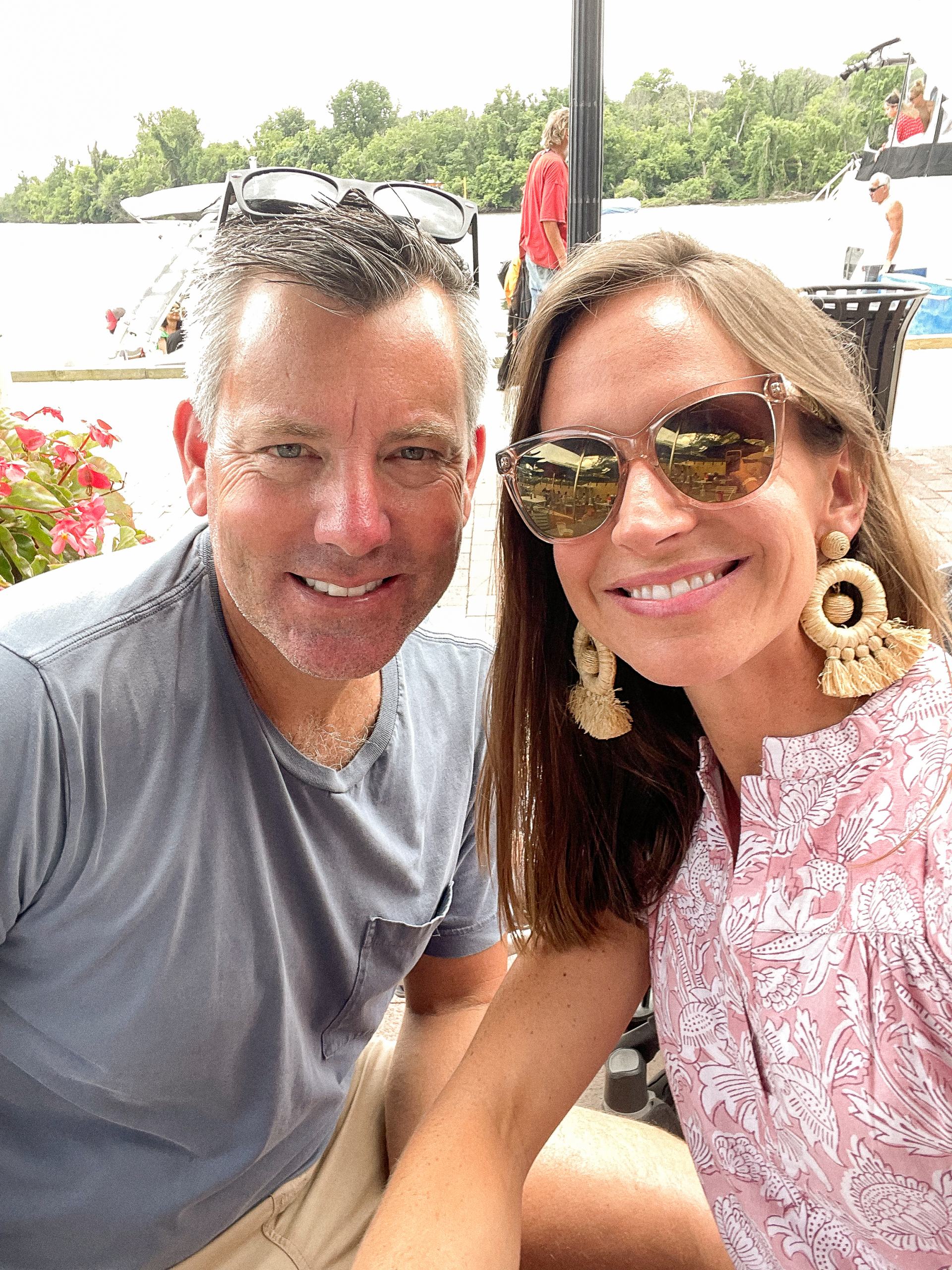 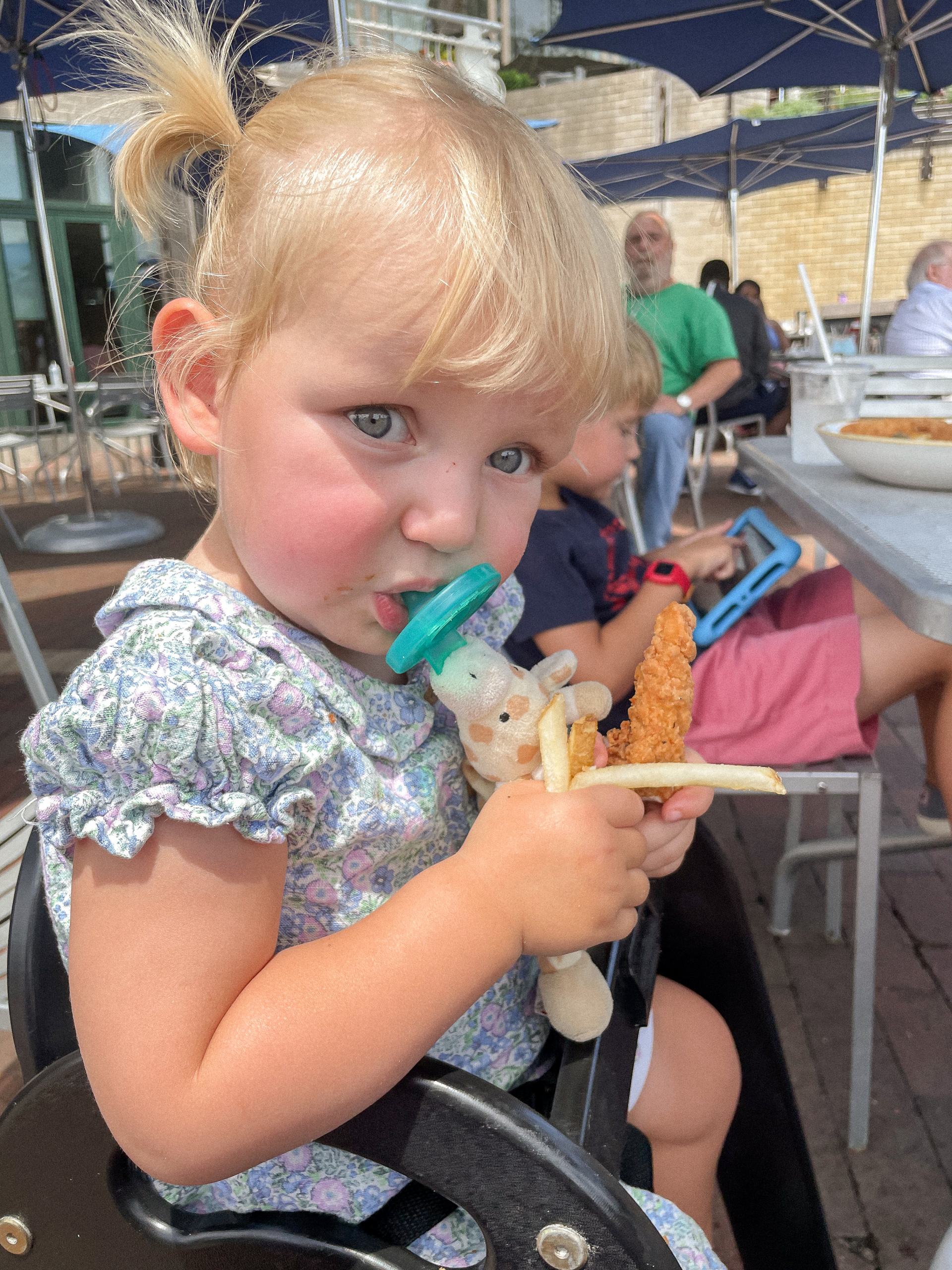 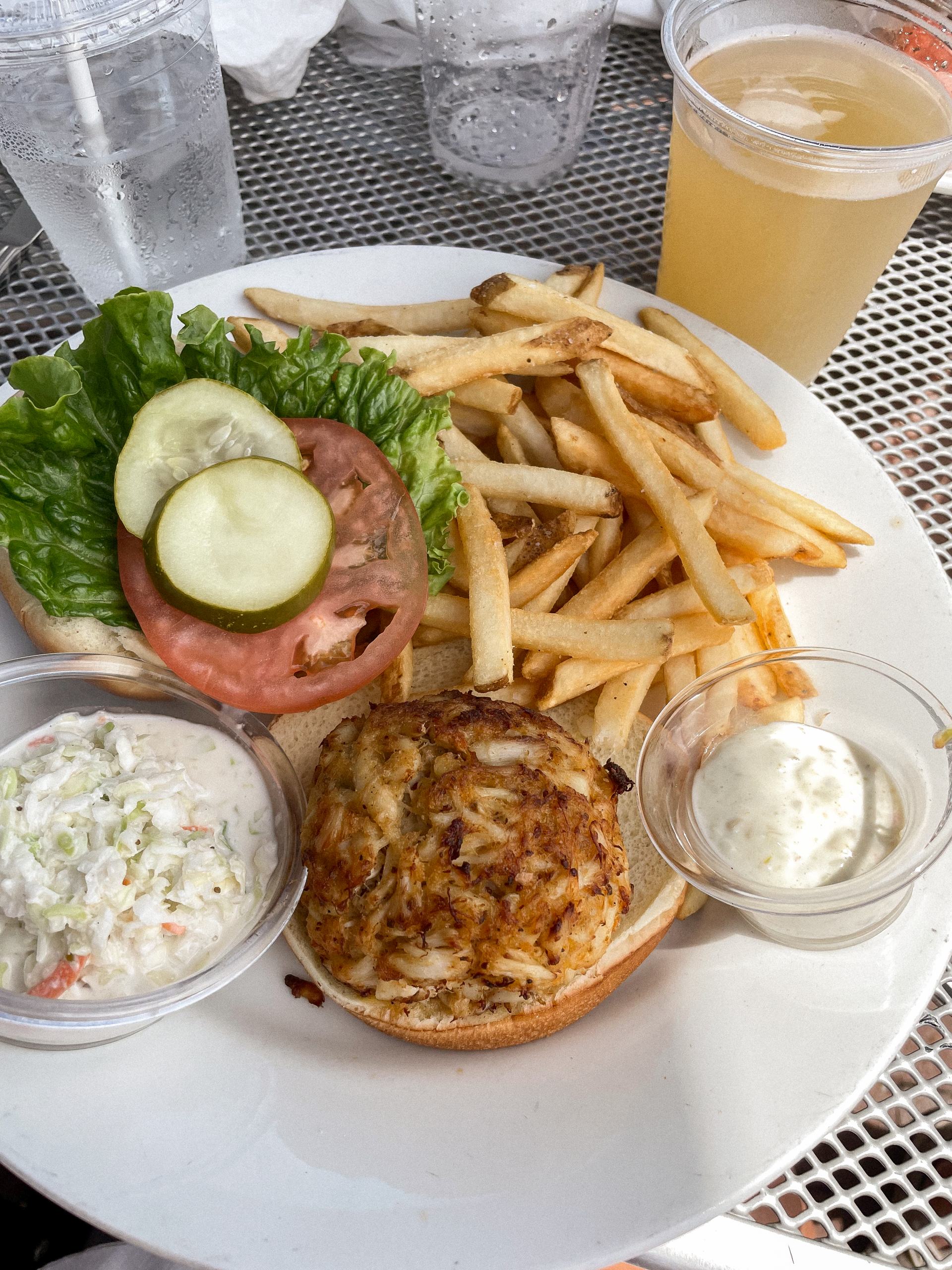 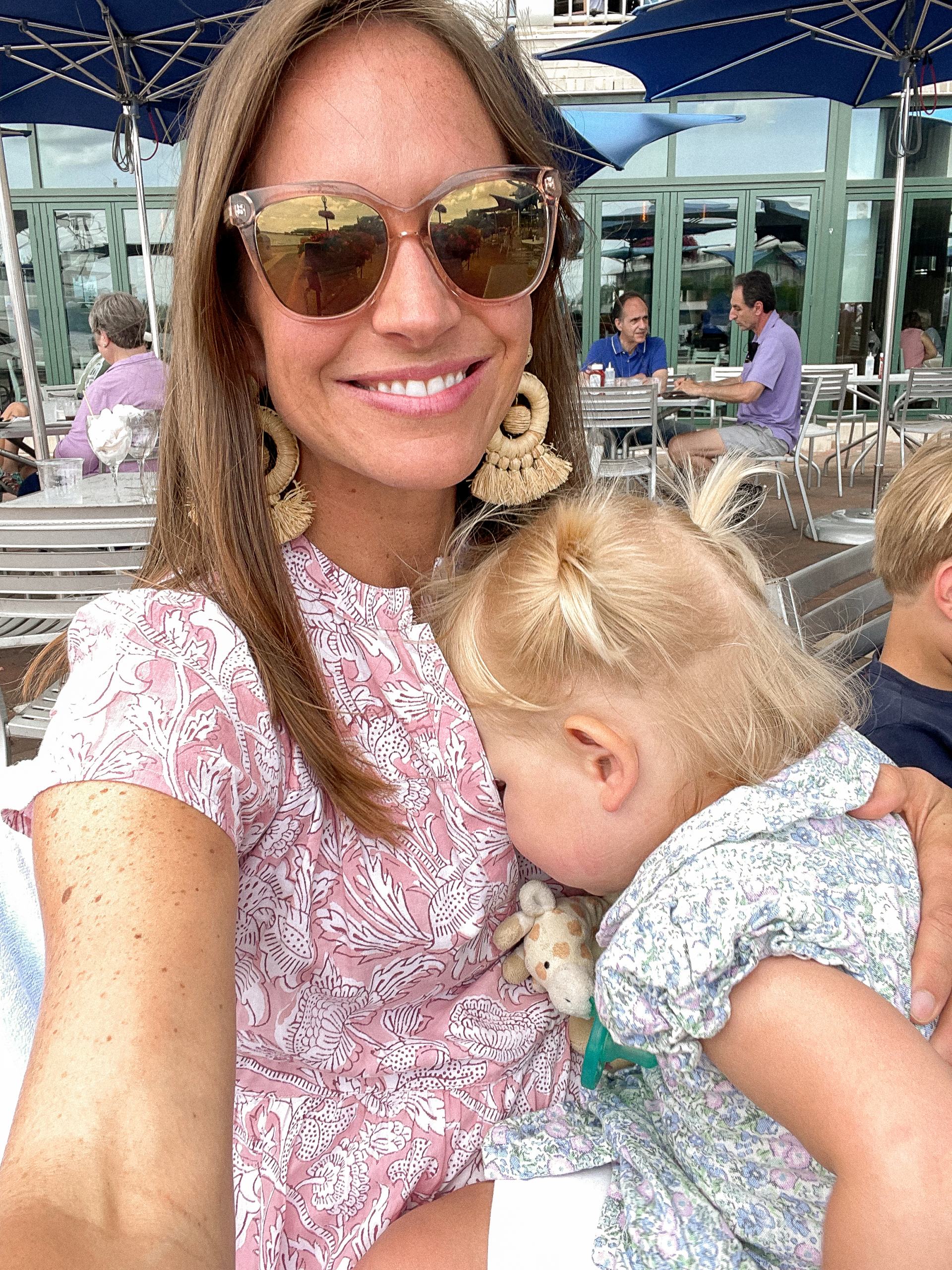 We had no reservations for lunch and knew we needed a kid friendly place so decided to try Tony & Joe’s Seafood, which is on the water and it’s a great people-watching spot.  They have lots of outdoor seating under umbrellas and thankfully we were able to be seated immediately.  Tate was asleep when we got there and we were able to park the stroller by the table while she slept.  I had the chilled gazpacho with lump crap meat and the crab cake sandwich.  Both were delicious!  Tom had the crab dip and fish tacos and he enjoyed his meal too.  The kids ate chicken tenders and even though they’re some of the pickiest kids I’ve ever met they enjoyed their chicken and fries. 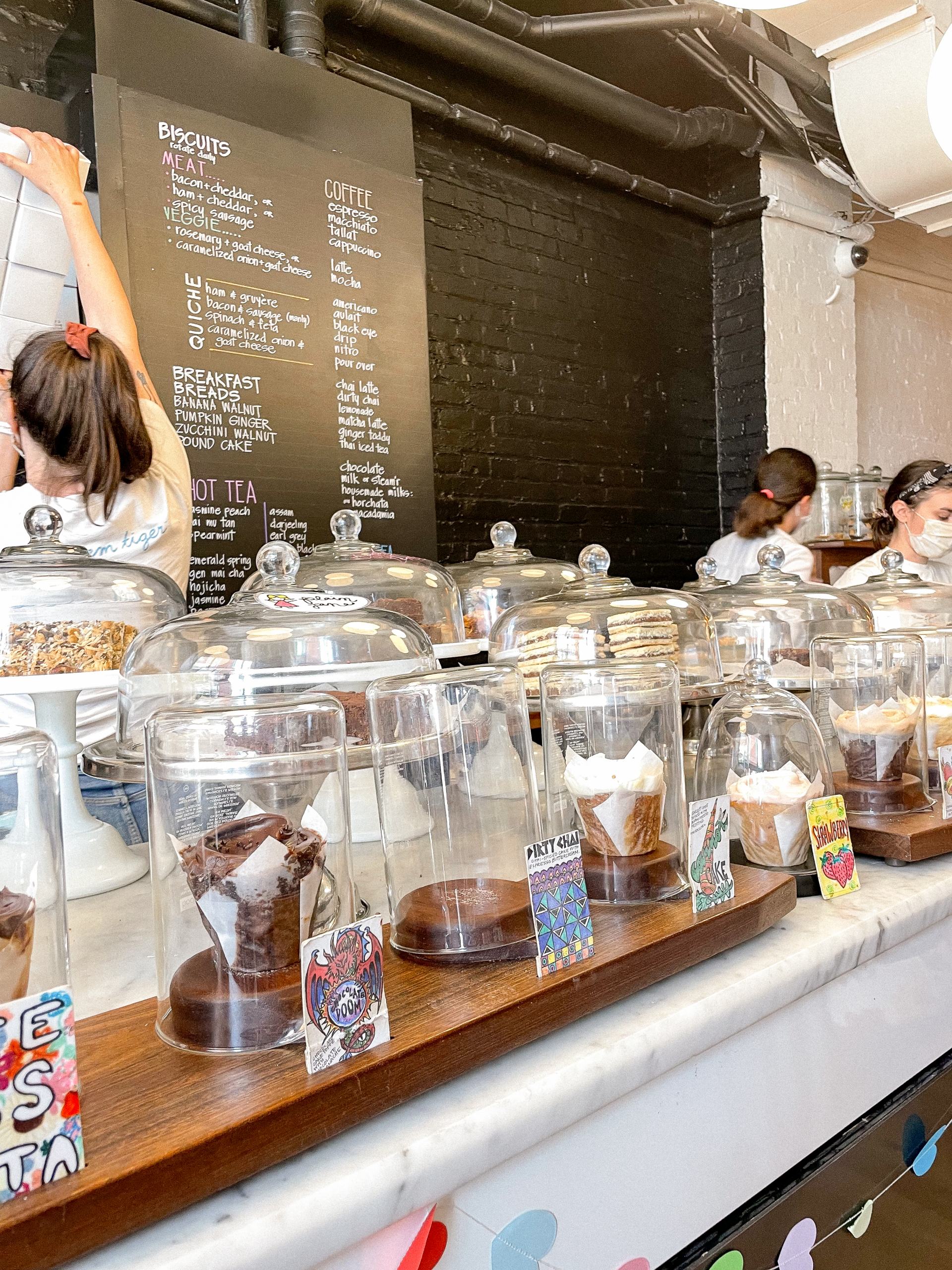 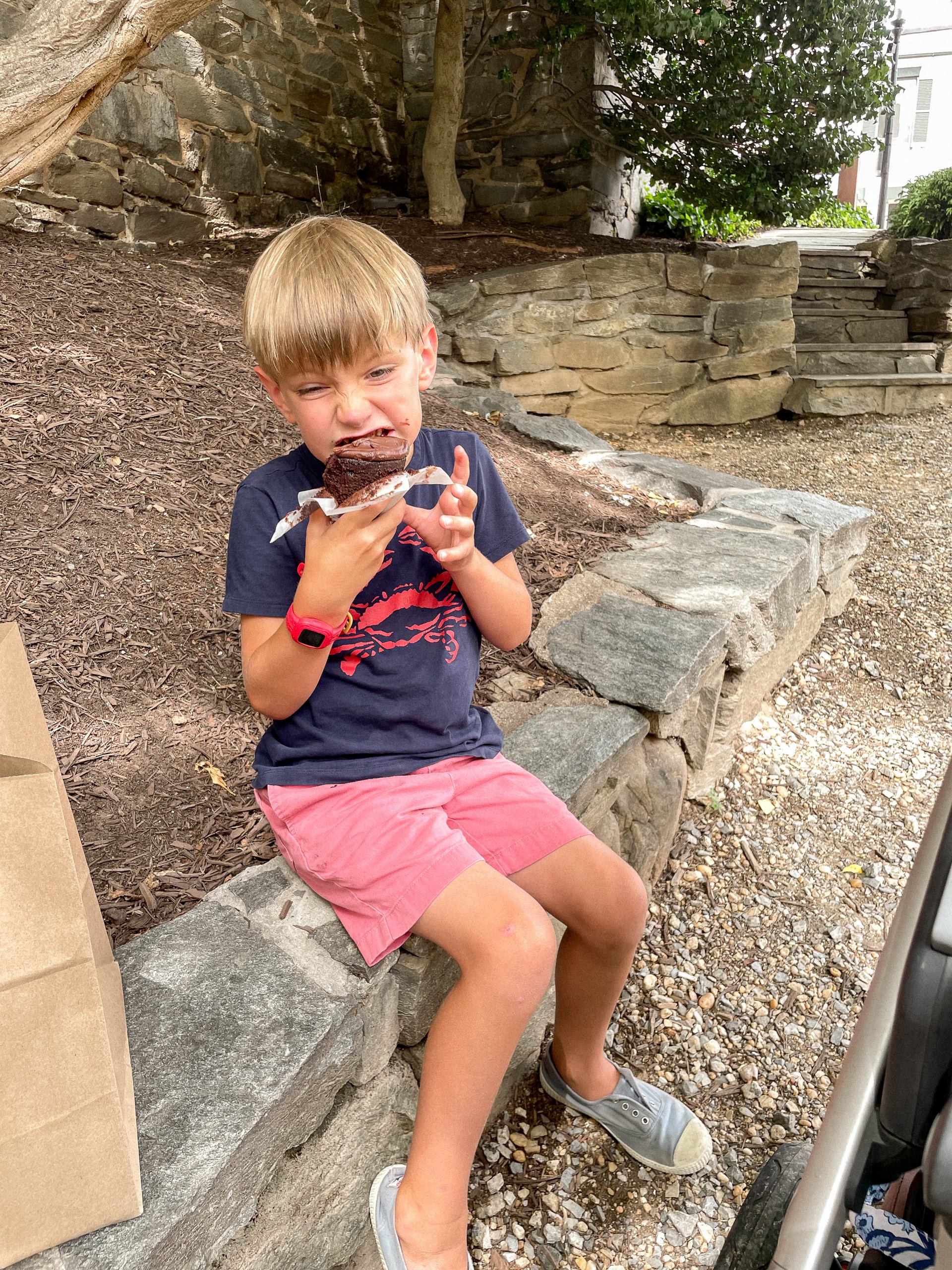 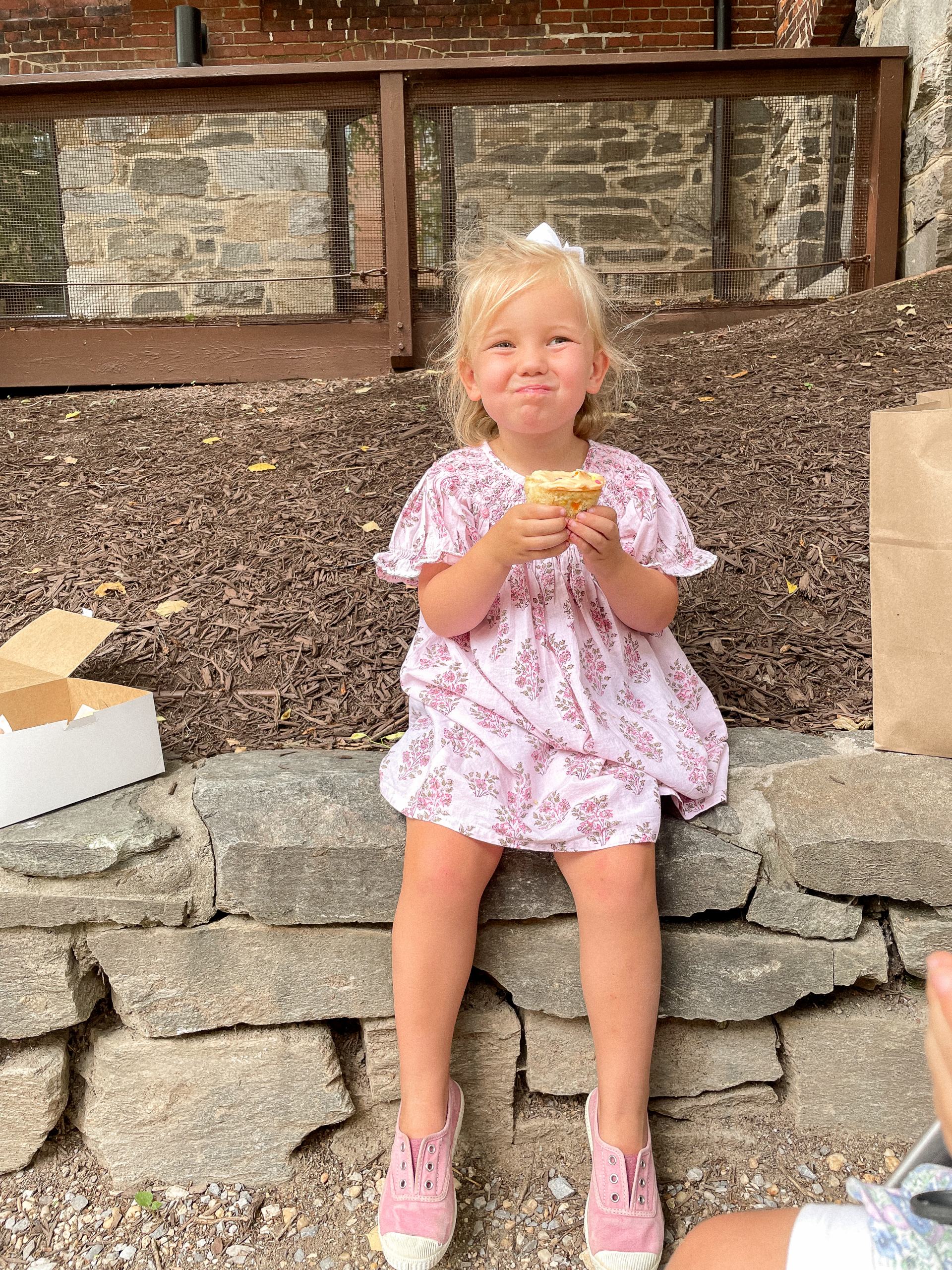 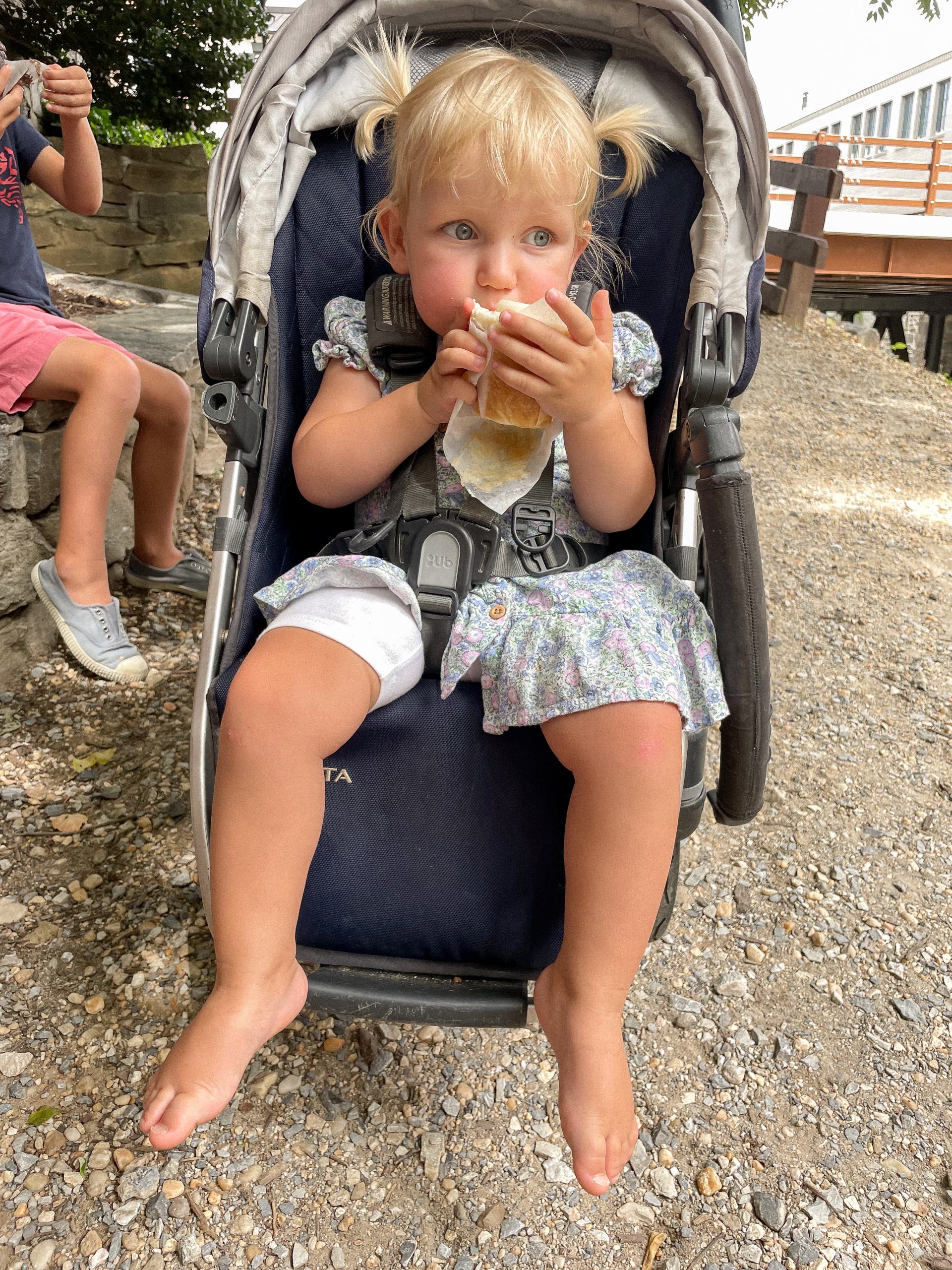 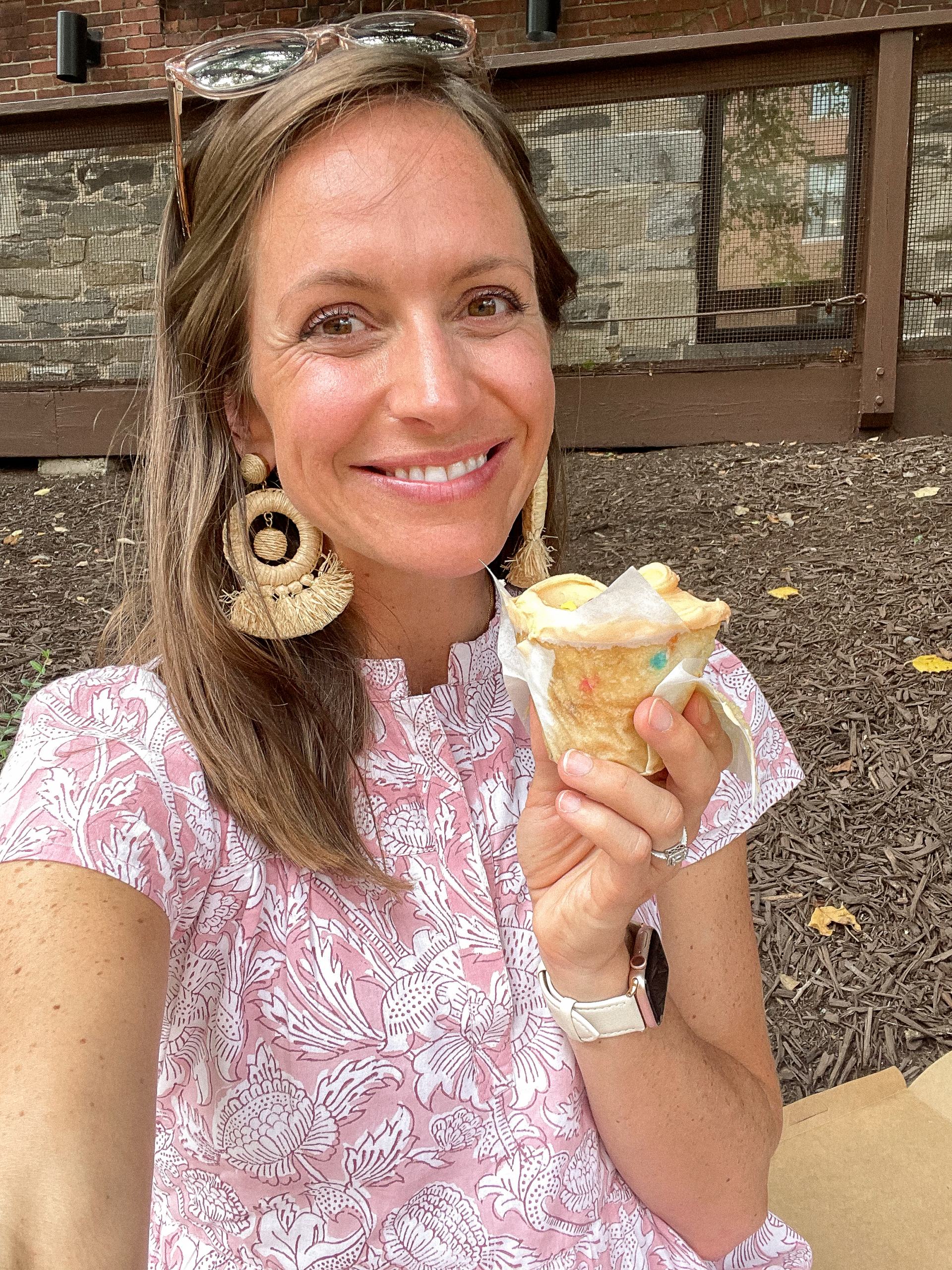 For Tom’s birthday I gave him a gift card to Sid Mashburn, which is a really cool destination for classic men’s clothing.  Ann and Sid Mashburn are an Atlanta-based power couple that are the epitome of effortless chic, and since Tom now gets to wear suits and nice clothes to work rather than in an Army uniform he has really wanted to pick up a couple of pieces from Sid Mashburn.  He took some time to visit the store on Wisconsin Ave. in Georgetown and I took the kids to Baked and Wired for cupcakes.  If you ever find yourself in Georgetown don’t listen to the hype about Georgetown Cupcakes- the wait is always way too long and the icing to cupcake ratio is a little disappointing if you’re an icing lover like I am.  Instead, head down to Baked and Wired!  The cupcakes are bigger and better (in my opinion) and the wait isn’t nearly as long.  They also serve great coffee!  We got some cupcakes to go and ate them in the shade along the tow path while we waited for Tom to finish shopping. 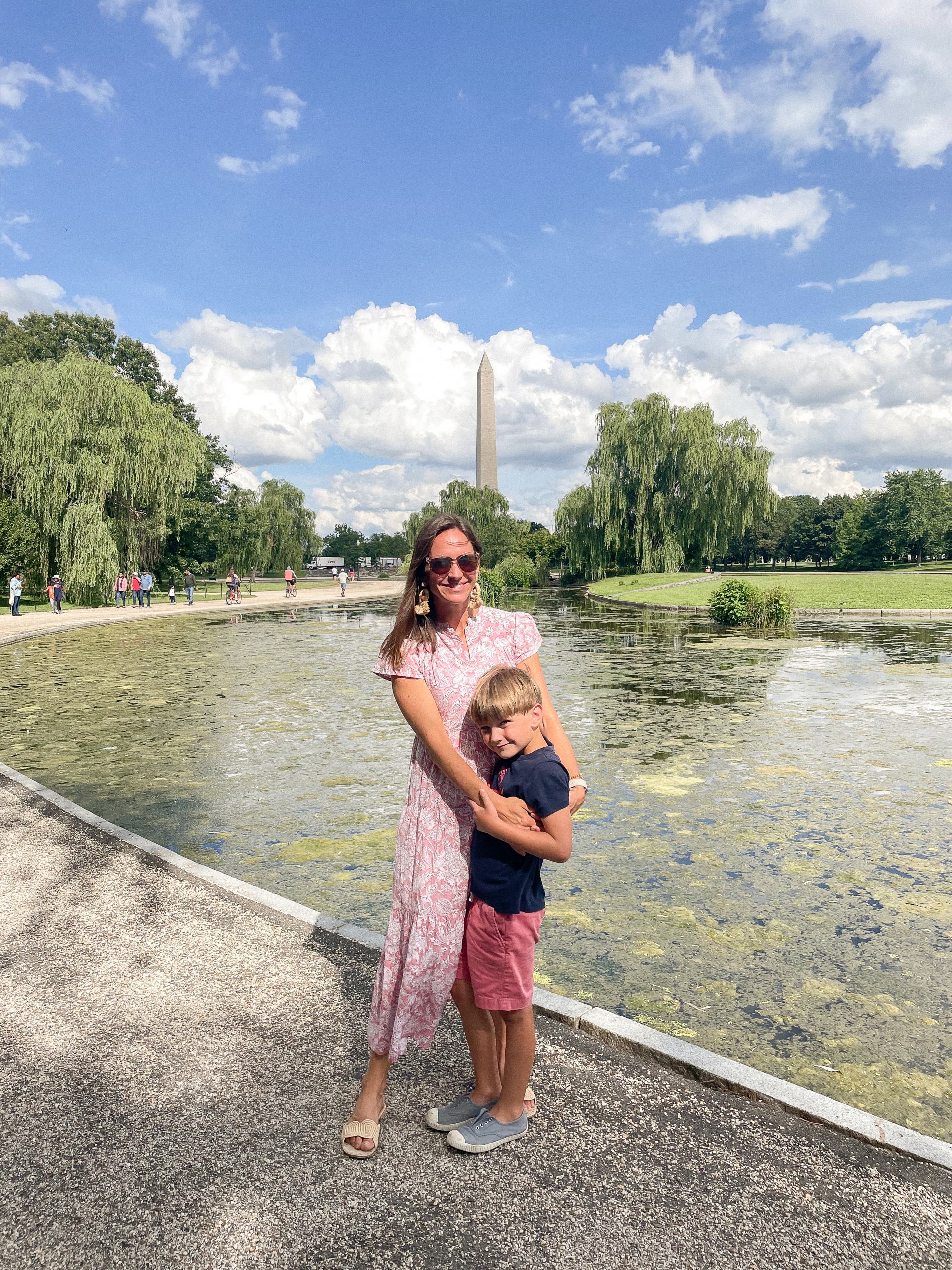 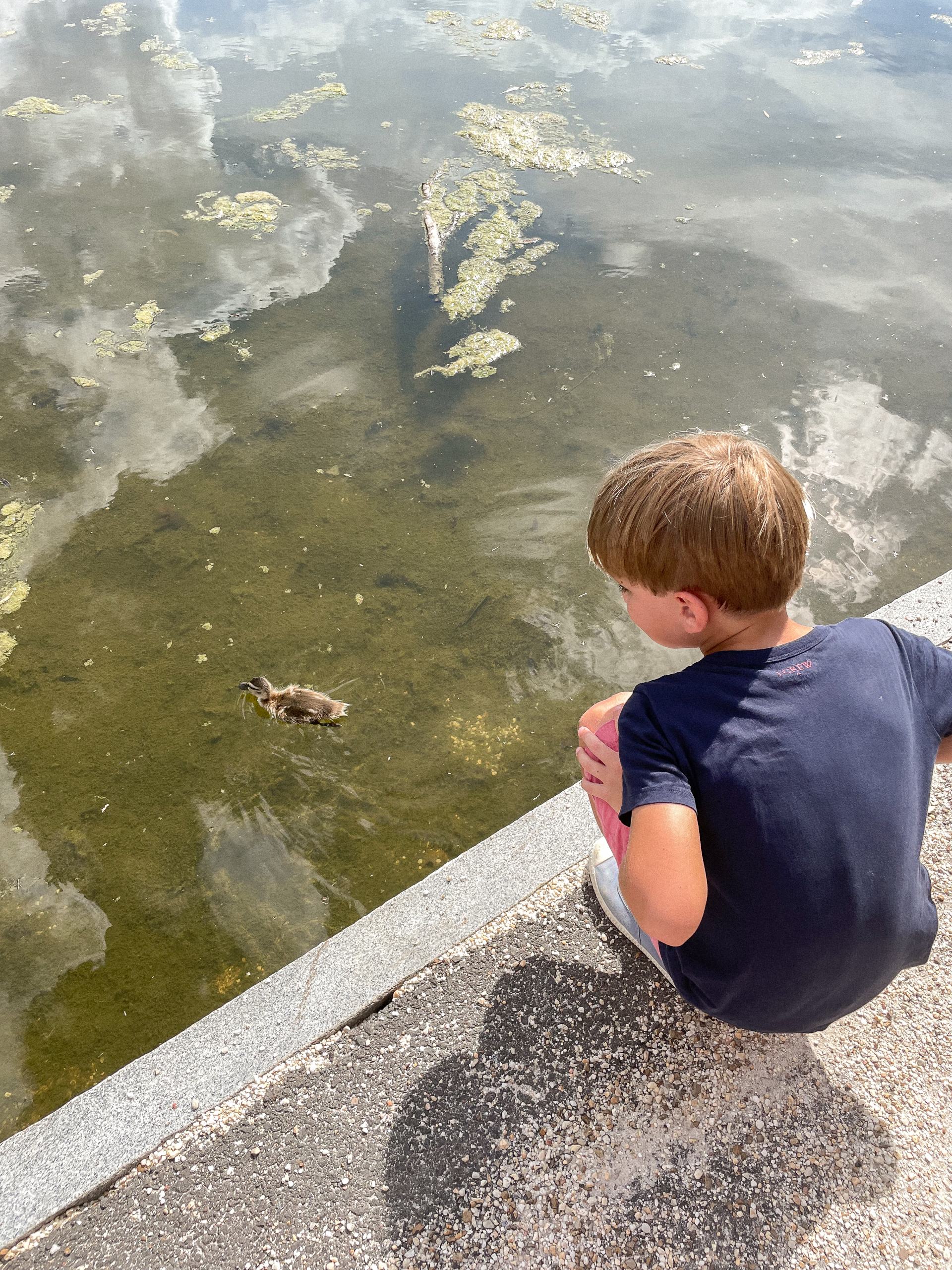 Next we walked along the Potomac River, past the Kennedy Center, over to the National Mall.  There is fencing up right now, likely in preparation for fireworks for the 4th of July, so we had to make a wide left through the Constitution Gardens, which is just past the Vietnam Wall.  It’s a beautiful spot to have a picnic and there are always lots of ducks for the kids to marvel at. 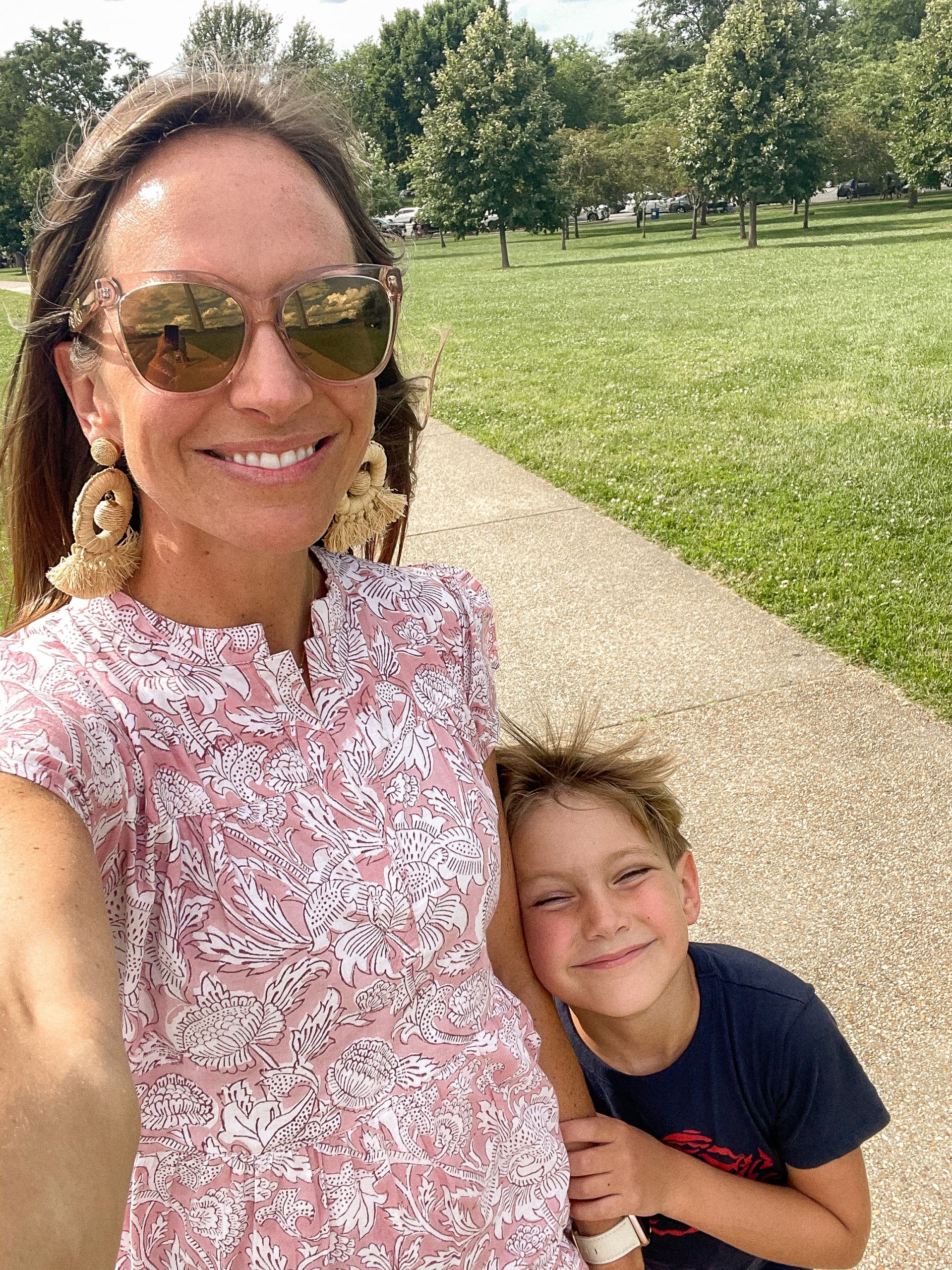 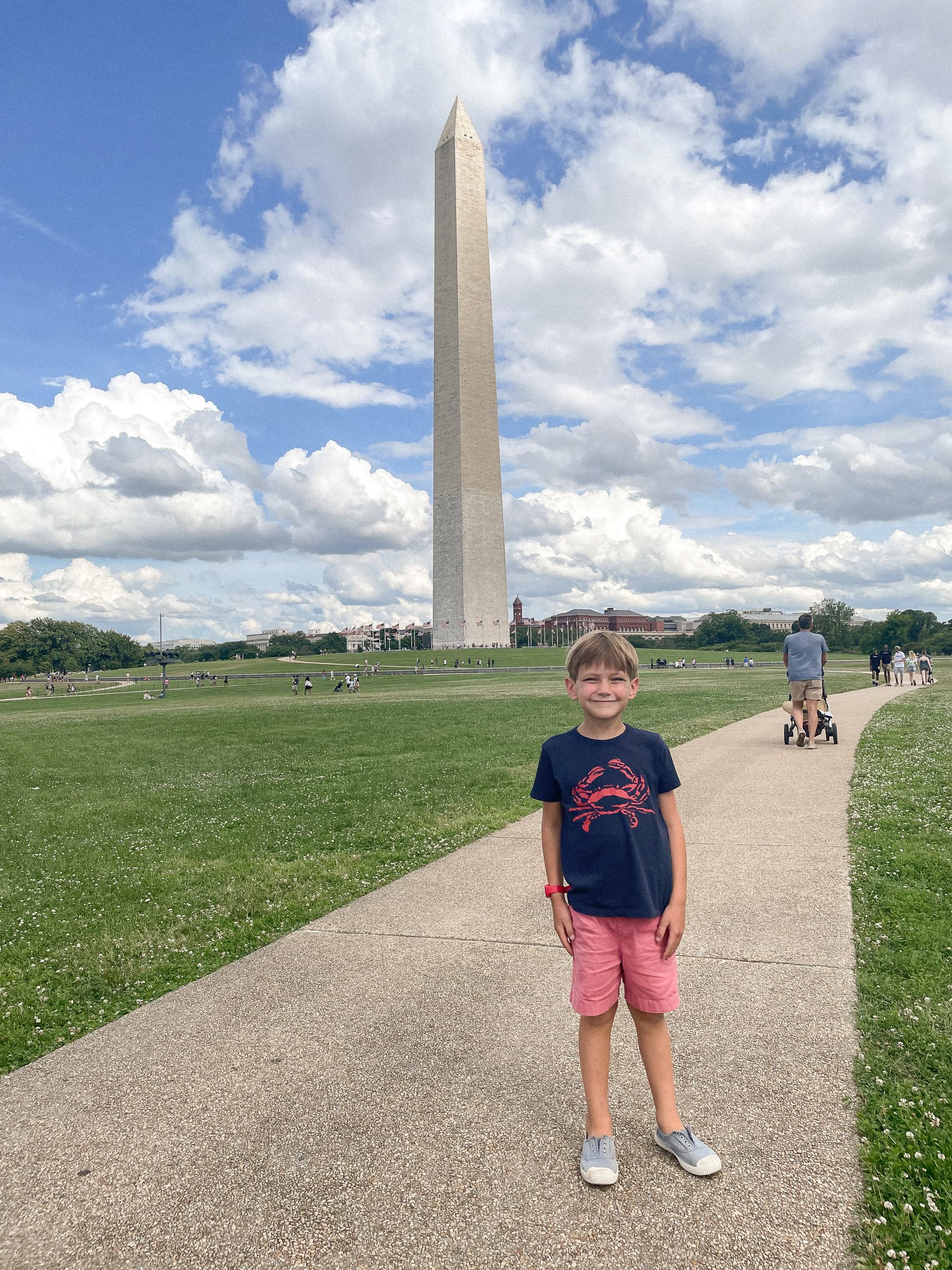 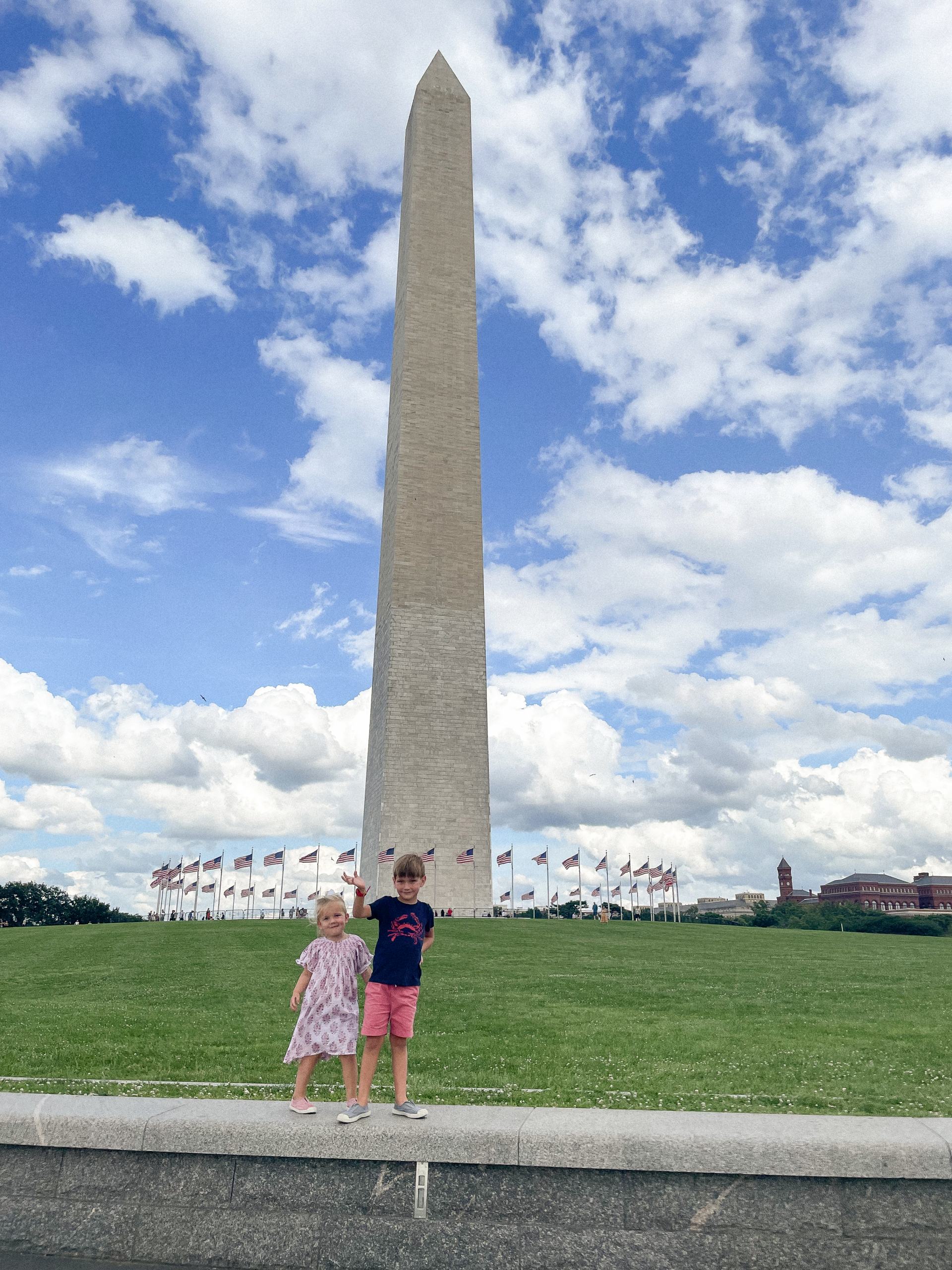 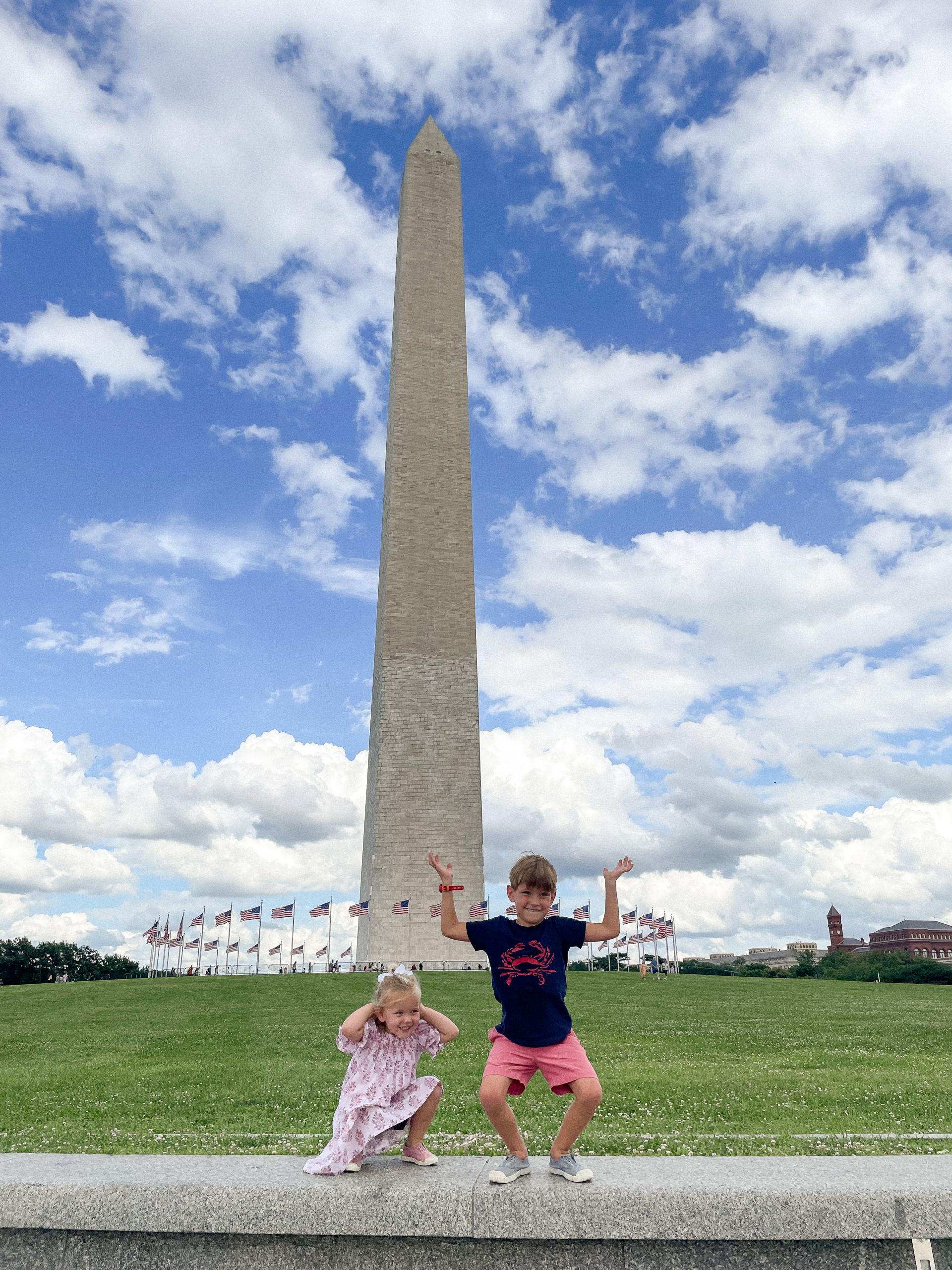 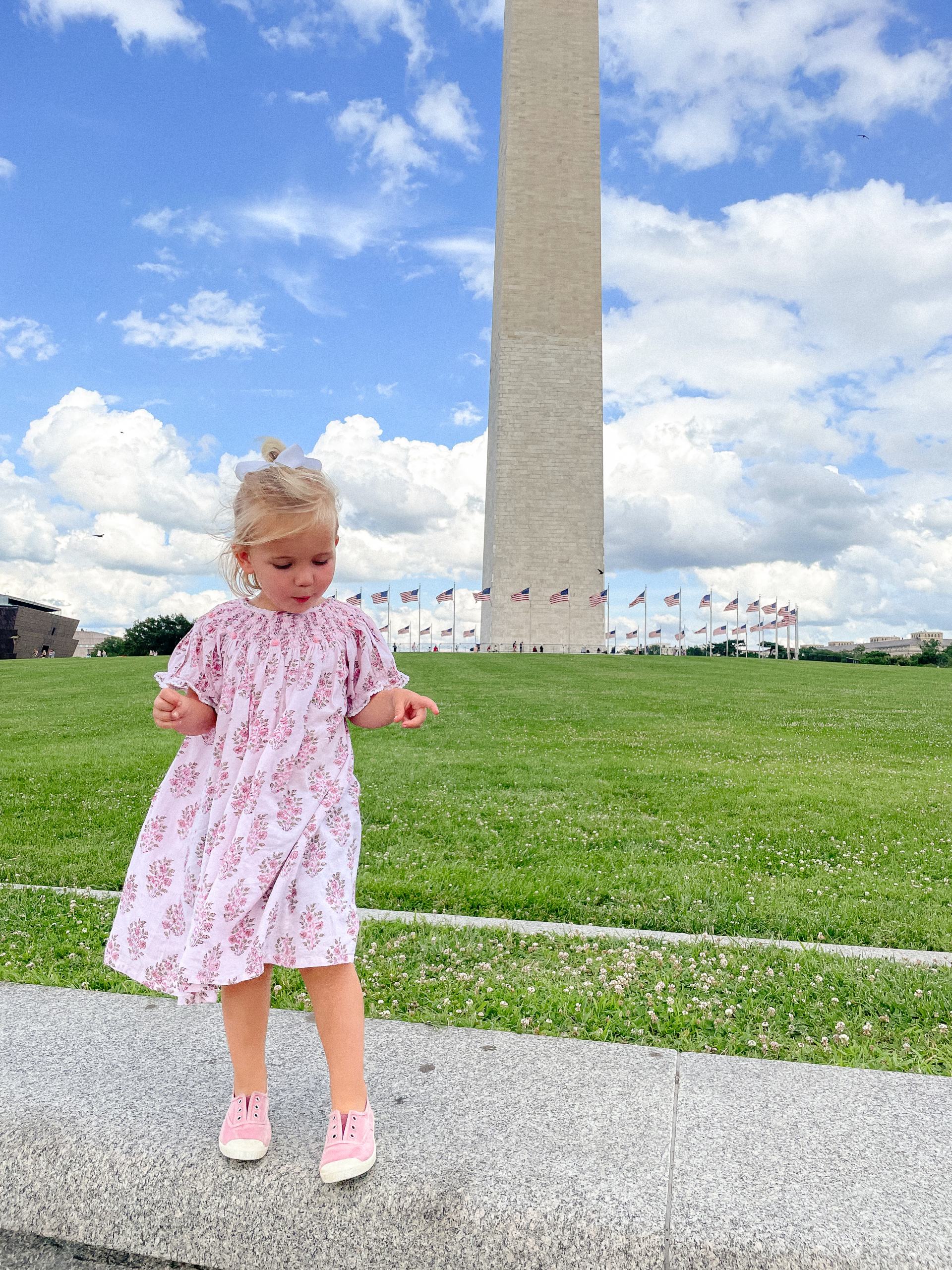 We made our way over to the restrooms just to the right of the Washington Monument (if you’re facing the Capitol) because the ones we normally go to between the Constitution Gardens and the Reflecting Pool were closed and then we wandered down the street to Constitution Avenue and took a right.  Just past the Smithsonian Museum of American History is a great little hidden gem that our kids always love wandering through.  There are some wooden structures there that the kids like to play under and then there is a WWII era Victory Garden.  You rarely find anyone in this little spot along the National Mall so it’s a great place to let kids run around without worry. 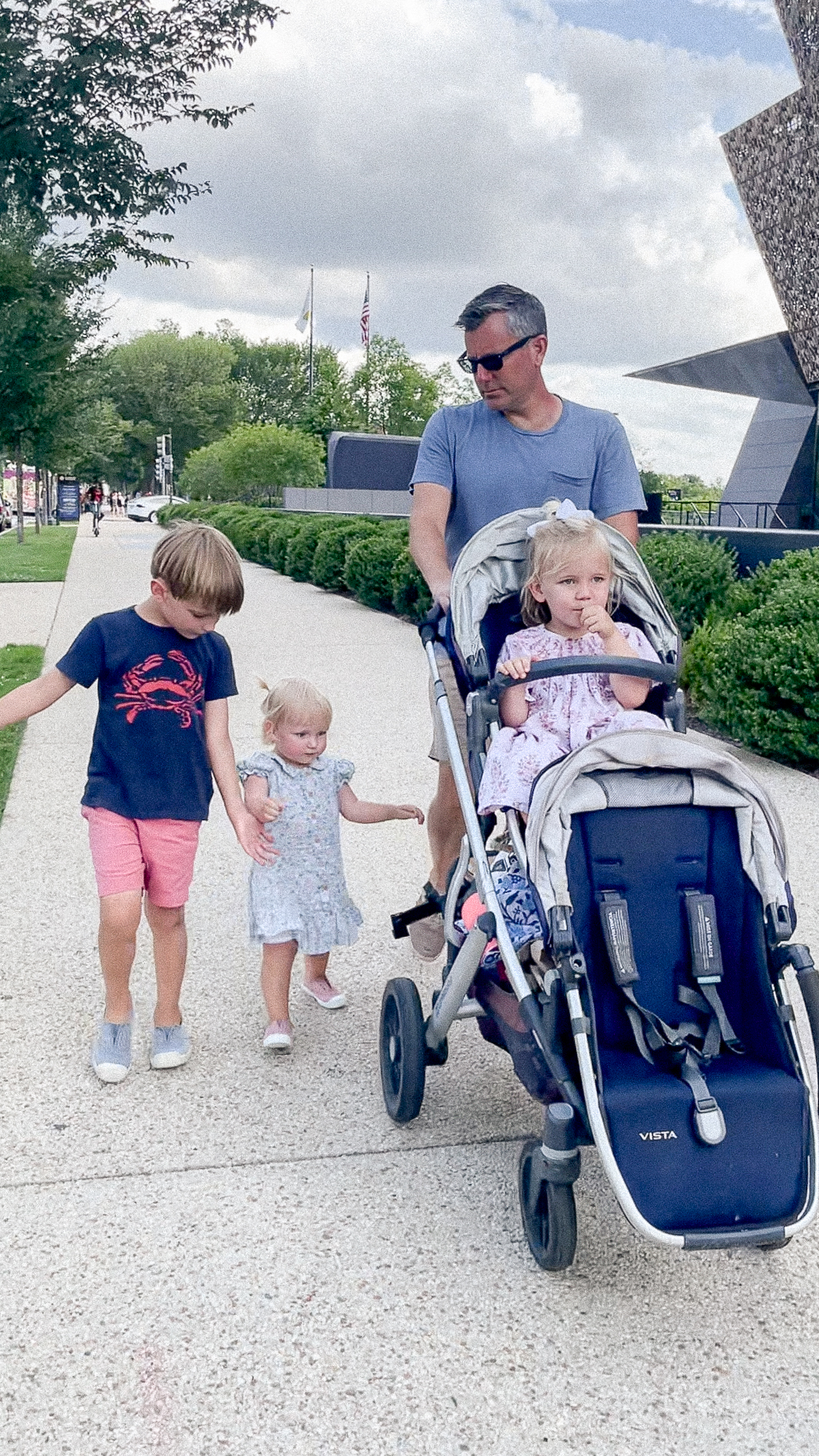 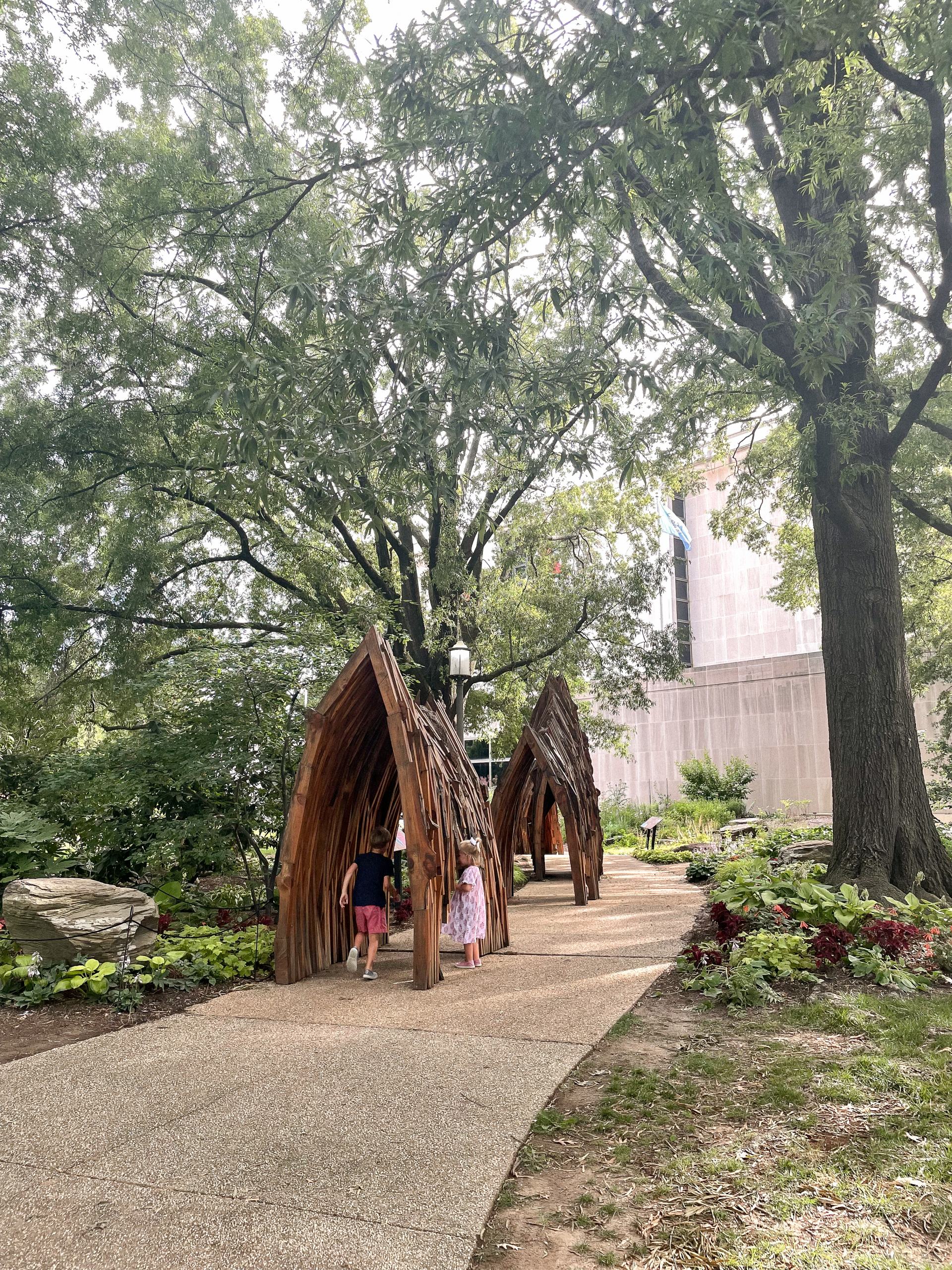 After that we headed to Federal Triangle metro stop and rode the train home.  By the end of the day we’d walked over 7 miles and it’s safe to say that we were all pretty tired after a hot and fun DC adventure!  I rolled all of this trip into an IGTV video if you’re interested in checking that out here.

Welcome to Stripes & Whimsy! While serving as an Active Duty Army Captain at the Pentagon in 2013, I decided to start my blog Life with a Dash of Whimsy as a creative outlet. I think that life is best lived when you add a little dash of whimsy to everything. Thanks for stopping by!