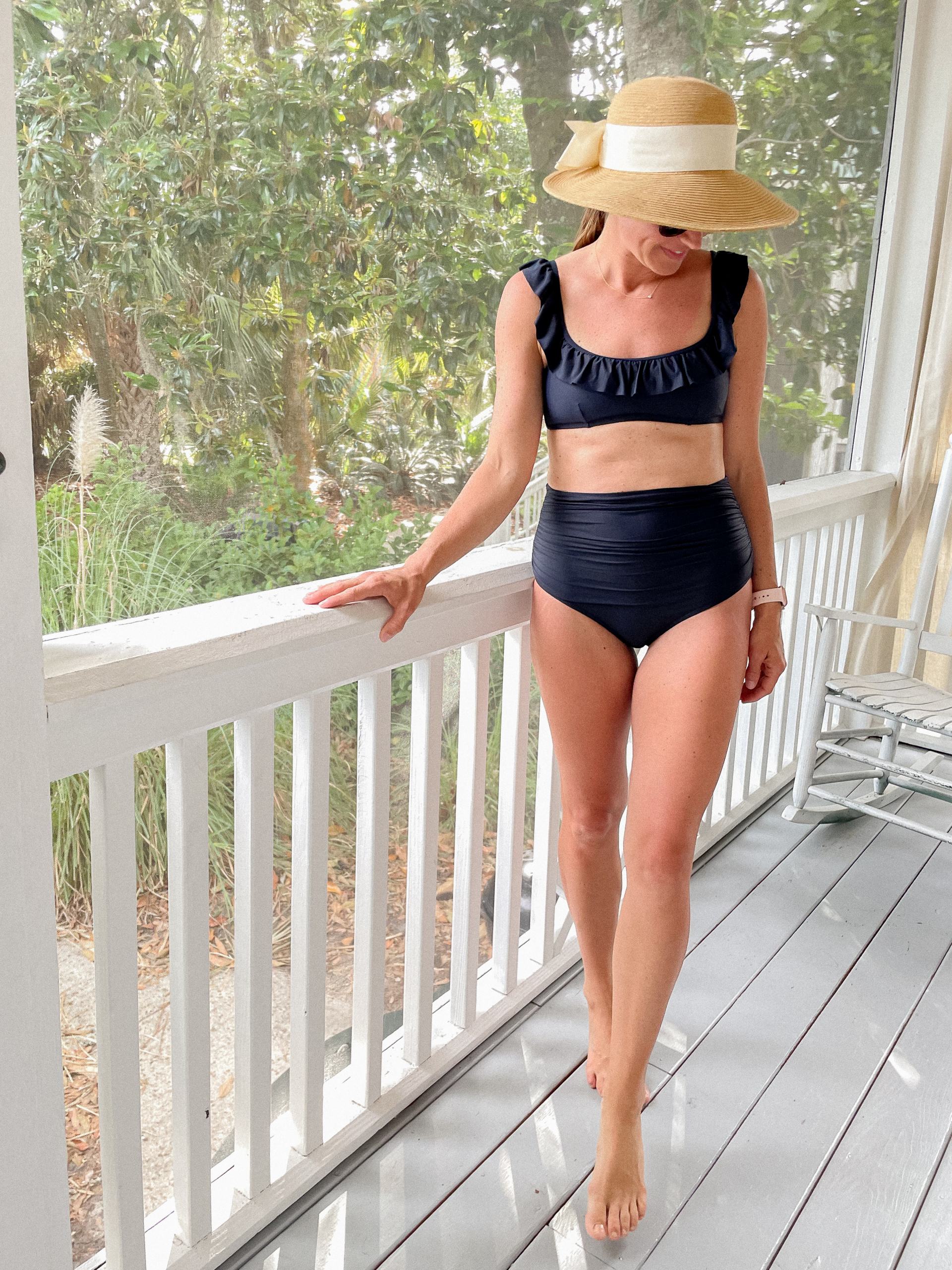 Time for 10 random things that pop into my head as I write this!

If you’re looking for great mom-friendly bikini bottoms, try these!  The ruching on the high waist is really flattering and they’re very comfortable too.  They run true to size and I’m wearing them in the photo above!  They come in a number of colors and there are lots of top options available too.  My top is a few years old but I’d get this one, this one or this one if I needed a new one.  My sun hat is a favorite but if you’re looking for a cheaper option this one (mentioned below) is great too!

I’ve been wearing this packable sun hat from Amazon almost daily since I bought it.  Nice and affordable ($25.99), has a drawstring which is great for a windy day at the beach, and I don’t have to worry about getting it wet since it’s not quite as precious as my Tuckernuck ones with the bows on them.

I randomly bought the Trader Joe’s Kung Pao Cauliflower (in the freezer section) and they were delicious!  I’d never had them before and I love cooked cauliflower and mom and I both devoured them.  In other Trader Joe’s news, the Patio Chips are back for the summer and they’re the best chips ever!

We’re at the beach now and Tate recently climbed out of her pack and play after her nap because she’d taken off her sleep sack on her own and was able to get out.  Someone suggested that we flip her sleep sack around so that the zipper is on the back, and since then we’ve had no issues.  I thought that was a really helpful tip!

One of my kids’ most used toys is their set of Magna-Tiles.  They received this set for Christmas and it’s so fun watching them use their imagination and it keeps them both entertained for extended periods of time.  I decided it was finally time to expand our set and I just ordered this Metropolis set which will allow them to build vehicles with wheels and buildings with windows and some new fun shapes.  It’s a hit so far!

My kids have been using Yeti water bottles for the past few years and we just upgraded them to 18 ounce ones for the summer.  They all love water and since we’re on the go so much in the summer I figured that they needed adult-sized ones now rather than the kid-sized ones they’ve had for 2 years (we added the bottle straw cap).  Yes, Yeti products are pricy but after trying cheap water bottles for the kids and even Hydroflask bottles I’ve decided that Yetis are far superior and worth the money.  Here’s why: THEY ARE DISHWASHER SAFE!  That’s the main reason, because I hate hand-washing things and it seems like most well insulated bottles need to be hand washed, but Yetis don’t!  The lids are also better designed than Hydroflask flip-up straw lids and they don’t get nearly as gross.  It was so hard to get all the crevices of the Hydroflask lid even with a toothpick and a small brush but I don’t have that problem with Yetis!  They keep drinks cold better than anything else we’ve tried, which is especially nice in the summer.  They also don’t leak all over if you close the straw spout because that’s the most irritating thing in the world.  If you’re military, be sure to check your Exchange because they’re a bit cheaper there!

I recently worked with The Inside on an Instagram promotion and I’m so obsessed with the beautiful X Benches I received in the Blue Aviary print (they make everything from headboards to pillows to sofas and chairs too).  No joke, I’ve had X benches on my furniture wish list for 10 years and I finally have the perfect ones that I was able to fully customize.  You can use code KATIEV50 for $50 off your purchase of $199 or more, and the code is good for the next 3 months.

I’m so thankful the kids took weekly swimming lessons from January until May.  Jack was already a good swimmer so his lessons were focused on strokes and technique, but Caroline really needed some work and now she’s a confident little fish.  We’re at Fripp Island for most of the summer and her new skills have removed a lot of the stress that comes along with having a non-swimmer who wants to keep up with an older sibling.  Water safety is so important and it’s fun to see them progress and become confident in the water.  I highly recommend Big Blue Swim School if you have a location near you (here in Northern Virginia it was previously called Tom Dolan Swim School at the Falls Church location) and this link should save you $50 if you sign up for weekly swim lessons!  They’re a nationwide chain so that referral link will probably work for you wherever you’re located!

I finally finished reading Firefly Lane last night!. It was really good but because I stupidly skimmed ahead and found out the ending I held off on finishing it because I knew I was going to cry.  Really great summer read if you’re looking for something fun and not too heavy but still with lots of ups and downs in it.  I’ll be reading Mary Kay Andrews’ The Newcomer and Hello, Summer next because her books are the ultimate fun summer beach reads to me.

We are years behind on this, but Tom and I recently started watching Arrested Development and it’s hilarious!  The humor is quirky and it’s right up our alley.  Highly recommend if you’re looking for something to binge watch!  We’re only on season one but so far it’s promising.