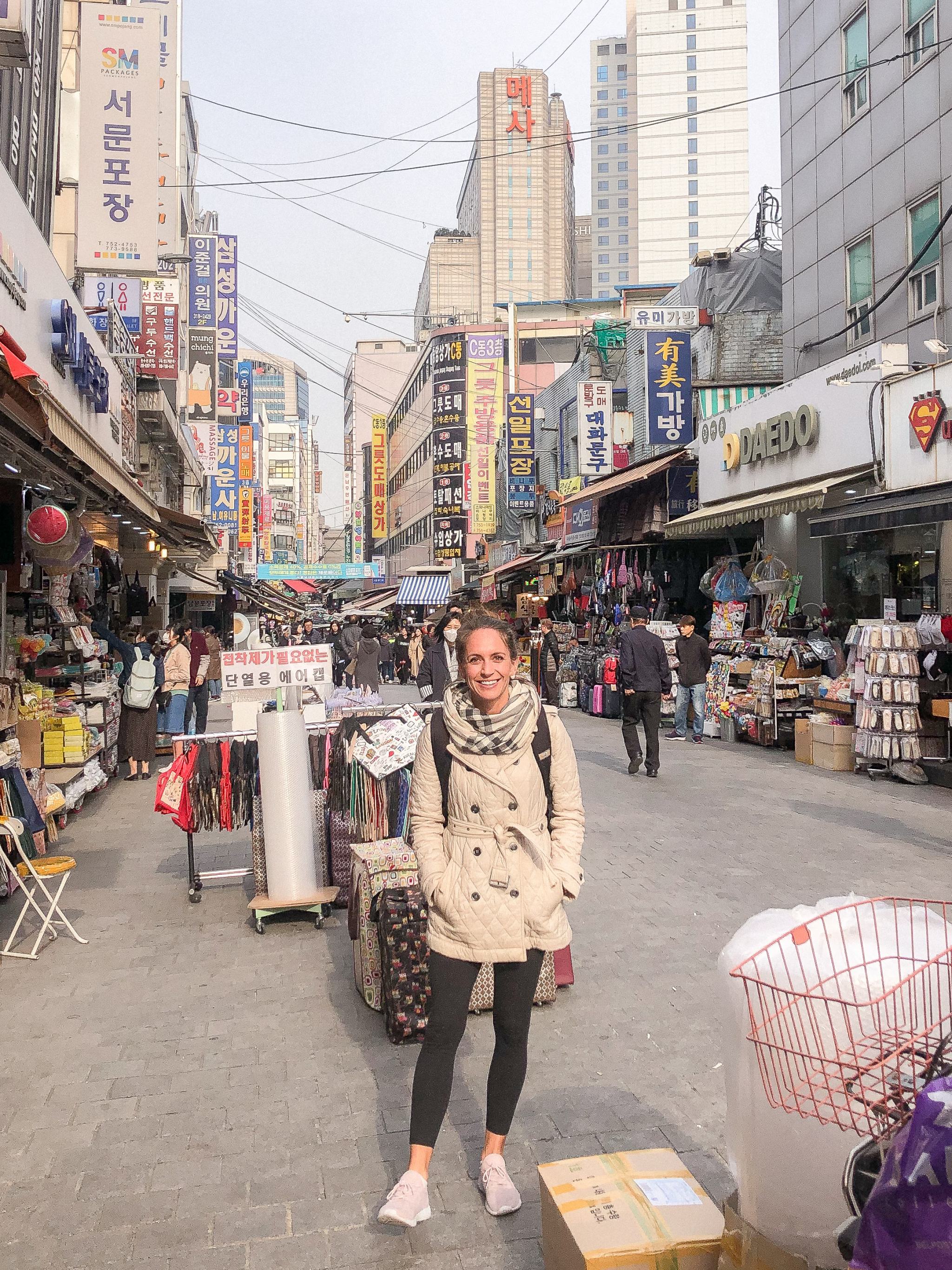 Be sure to read the 4 Japan blog posts and my packing list here!

I flew from Tokyo to Seoul on an earlier flight than Tom did, so I got to Seoul at 9PM and had to figure out how to get to our hotel on my own.  Thankfully, the Seoul (Incheon) Airport is the most amazing airport I’ve even been to.  Seriously.  Everything was clean and beautiful and straight forward and getting a bus ticket (using another Airport Limousine Bus) straight to our hotel was incredibly easy.  We stayed at the Conrad Seoul and it’s was a drop dead gorgeous hotel.  I made myself at home once I checked in and Tom showed up a few hours later.  The shower had a waterfall shower head, there was a magnificent bathtub, a Nespresso machine in the room (I loved it so much I bought one shortly after we returned home), electronic blinds, and despite the terrible smog we had a beautiful view of the Han River and the city.  That’s the Seoul Tower out there in the distance! 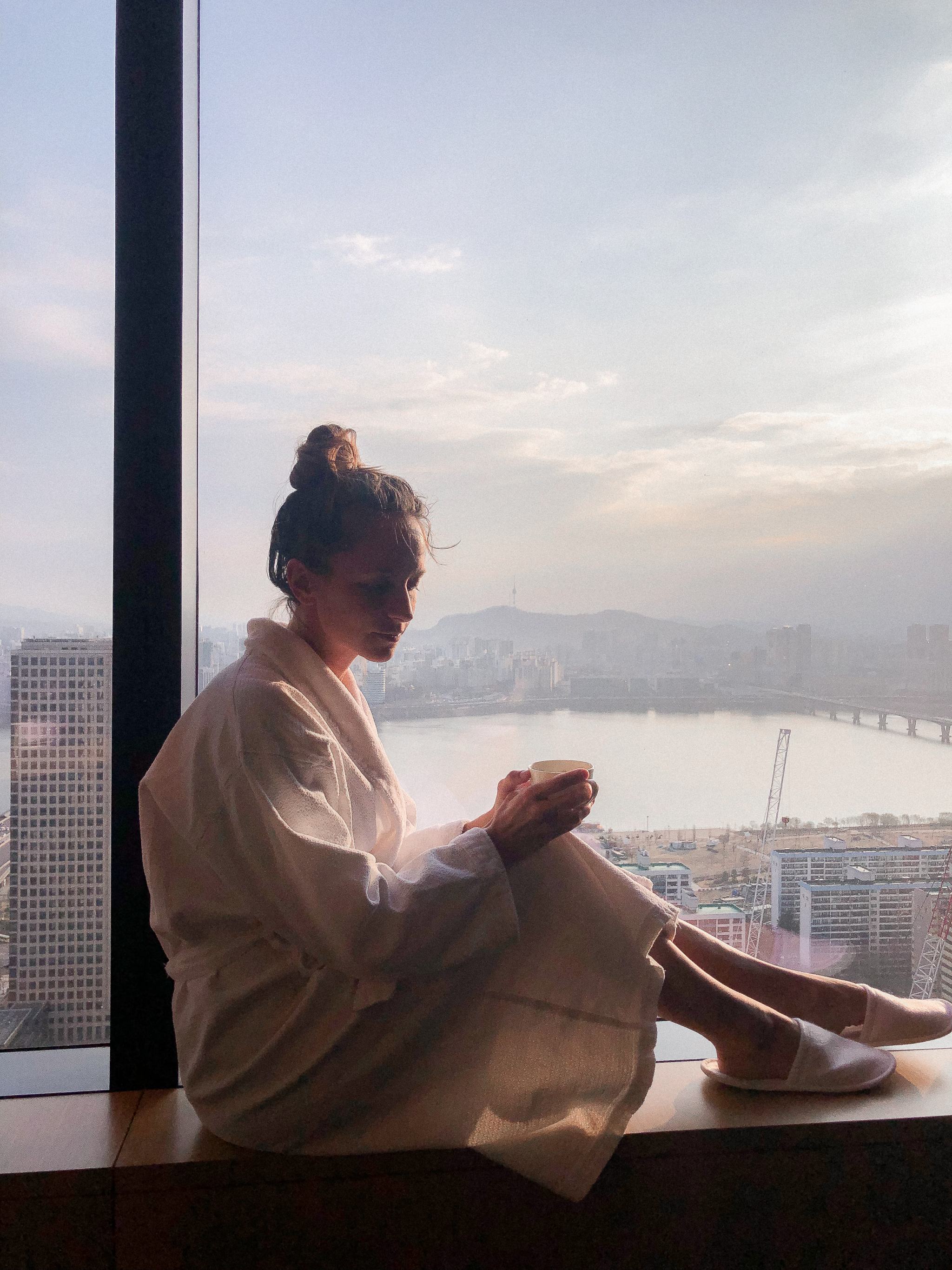 Tom finally arrived after midnight and I was so excited about the room and being in a familiar place that I was still awake when he got there.  When my dad was an Active Duty Army Officer he was stationed in Seoul on an unaccompanied tour, and my mom, brother, and I visited him for a month and a half when I was about 10 years old.  It was a magical time for us (it was Christmas when we visited him, so that made it extra special) so this leg of the trip was heavy on nostalgia for me.

Early the next morning we took a cab over to Yongsan, which is the Army post right in the heart of the city.  Tom and his co-workers had meetings that day so I wandered post and found where my dad had lived and visited the Dragon Hill Hotel (we would do school work in the lobby when I was a kid so it was fun seeing what all had changed or remained the same in 20 something years).  I then ventured out to Itaewon, which is a shopping and restaurant area just outside of Yongsan.  I window shopped and all the sights and distinct smells took me on a sensory trip to some of my favorite/most exotic childhood memories.  I’m so glad I was able to go on this trip!  Tom and the other guys ended up venturing into Itaewon on their lunch break so we met up at Vatos Tacos, which had been recommended by lots of you military folks who have spent time in Korea!  It’s a hip Mexican-Korean restaurant that (I believe) was started by Korean American brothers who grew up in Texas.  It definitely lived up to the hype.  I had the much-raved-about Kimchi Fries which were loaded with brisket and Mexican toppings, yet it also had kimchi on it too.  Oh my gosh, they were incredible!  And I didn’t even know I liked kimchi! 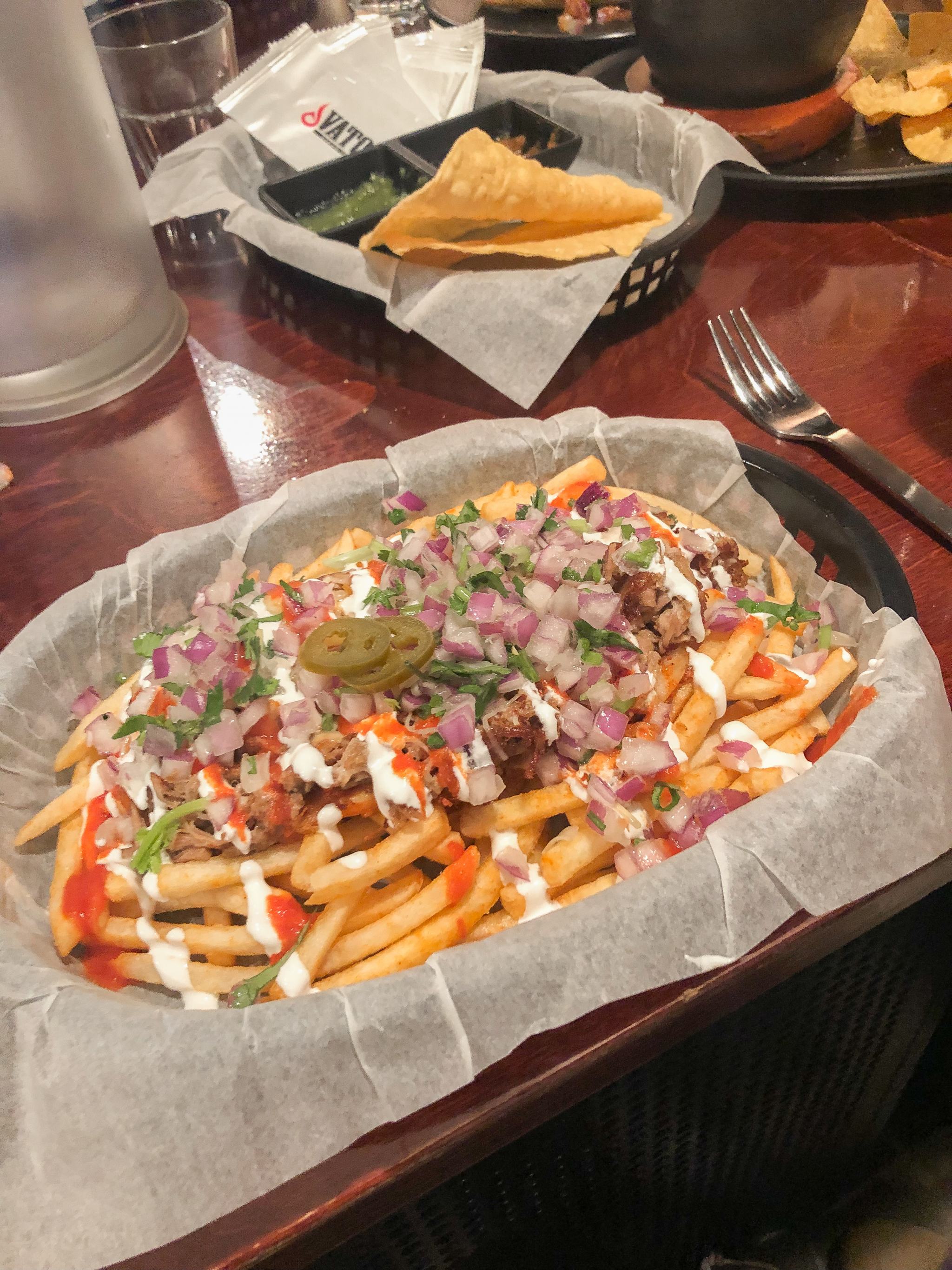 After lunch Tom headed back to work and I headed out on an adventure.  I’d heard about a raccoon cafe and decided to go see what that was all about (plus I needed to charge my phone and wanted a cup of coffee).  I visited a place called Blind Alley where there were a couple dogs and a giant pig roaming the cafe, and then in a back room there was a whole play area for two raccoons.  I don’t exactly trust wild animals (even if they have been domesticated) so I didn’t get too close (you can let them climb on your back and head if you want to), but I did feed and pet one of them.  Then I thoroughly washed my hands and headed back out on my adventure.  That was one of those things you definitely could never do in America, so it was certainly a unique experience!

On this first day in Seoul I wore my favorite yoga pants (Amazon and only $25, I wear size small), my beloved tie-back sweatshirt (also Amazon and comes in so many colors and it’s super soft and cozy…I have 2 and would love more!), comfy Walmart sneakers (the ones here are pretty much sold out now but these sneakers are the same brand and look very similar), a Burberry scarf (an investment piece but it will last you forever…mine is around 10 years old I think), an old Burberry coat (this one and this one are similar…again, these are investment pieces but won’t ever go out of style, mine is around 5 years old) and my favorite Julie Vos pearls (I have the large size).  This was a great sightseeing outfit because I was super comfy but also felt nice and pulled together. 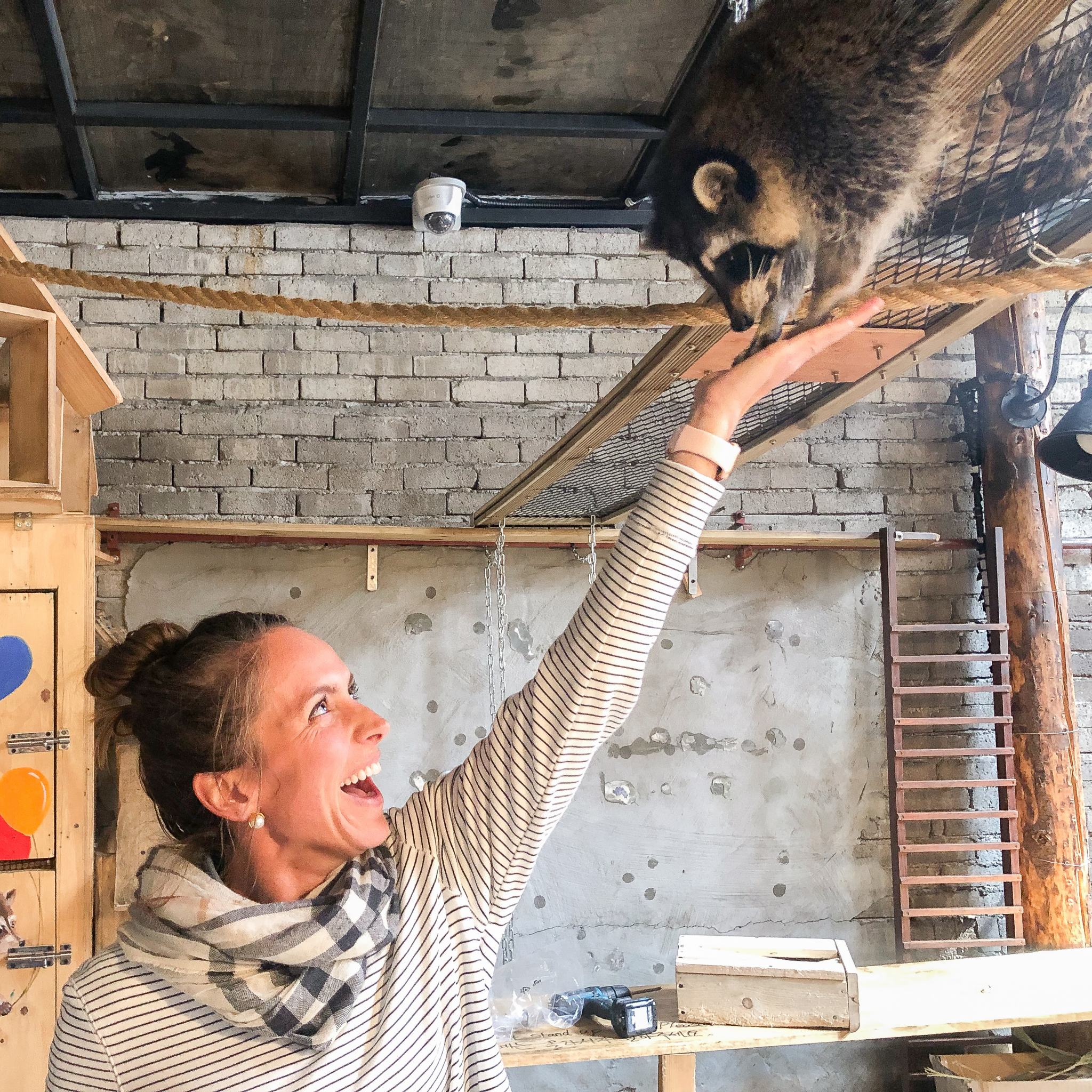 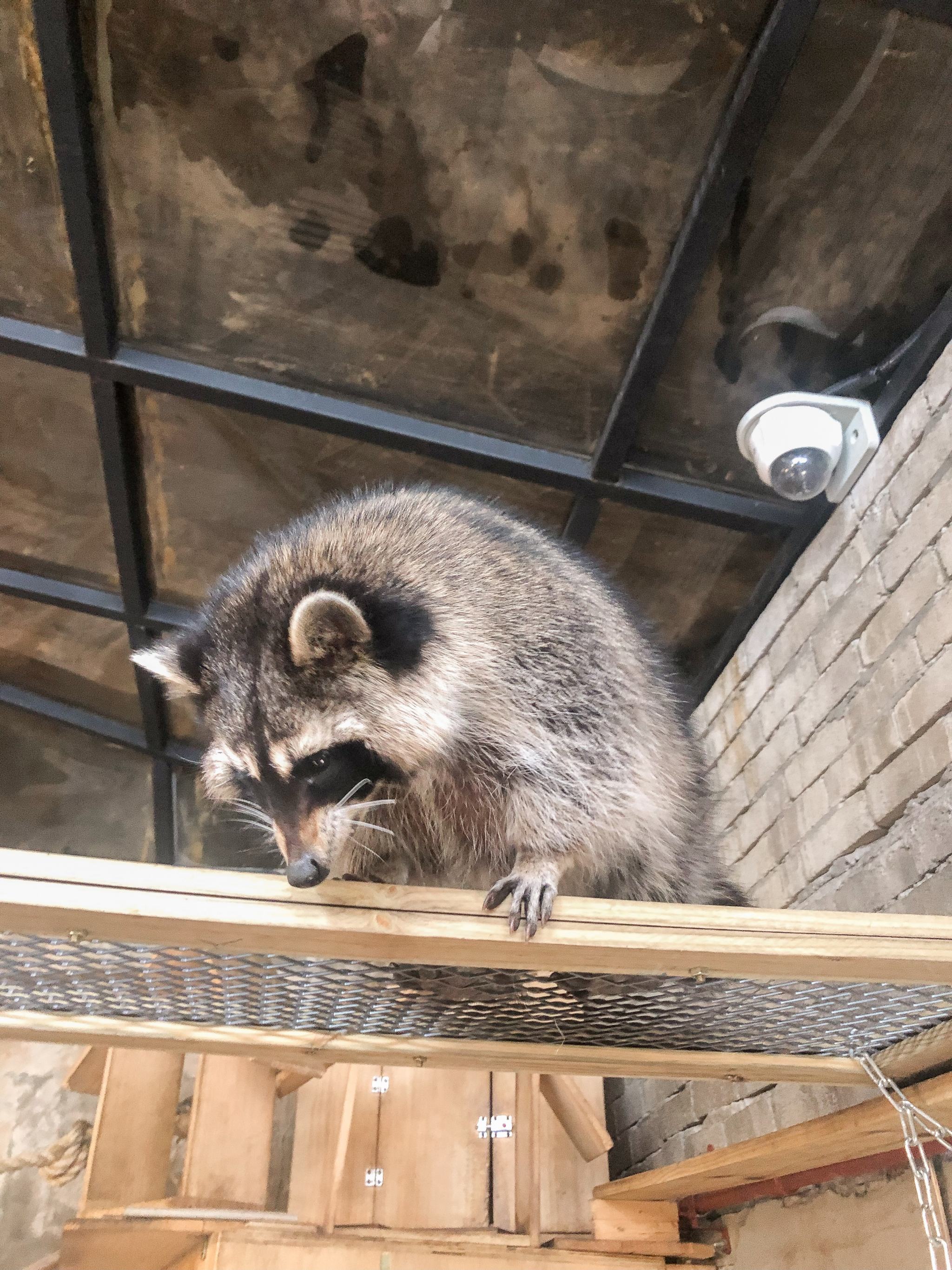 I had heard about the Seoullo 7017, which is kind of like the High Line in NYC, so I decided to wander that way.  It’s an old elevated highway that has been transformed into a walking path with gardens and art and different types of attractions.  It was pretty neat!  I wandered around there until Tom was able to join me, and then he and I headed to the Sungnyemun Gate, which is a 14th century gate to the city that has been rebuilt.  It was a massive pieces of architecture and it was incredibly beautiful. 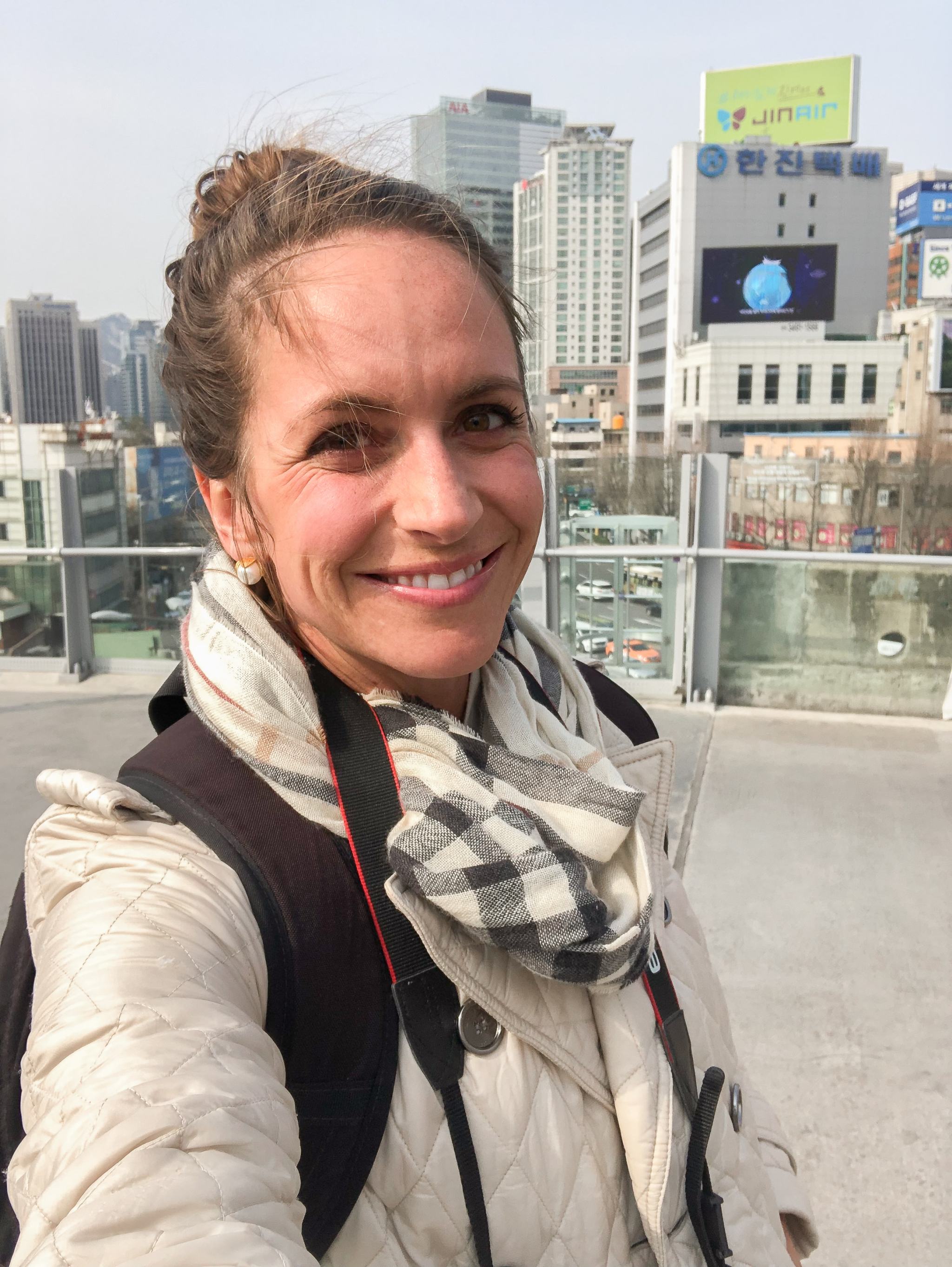 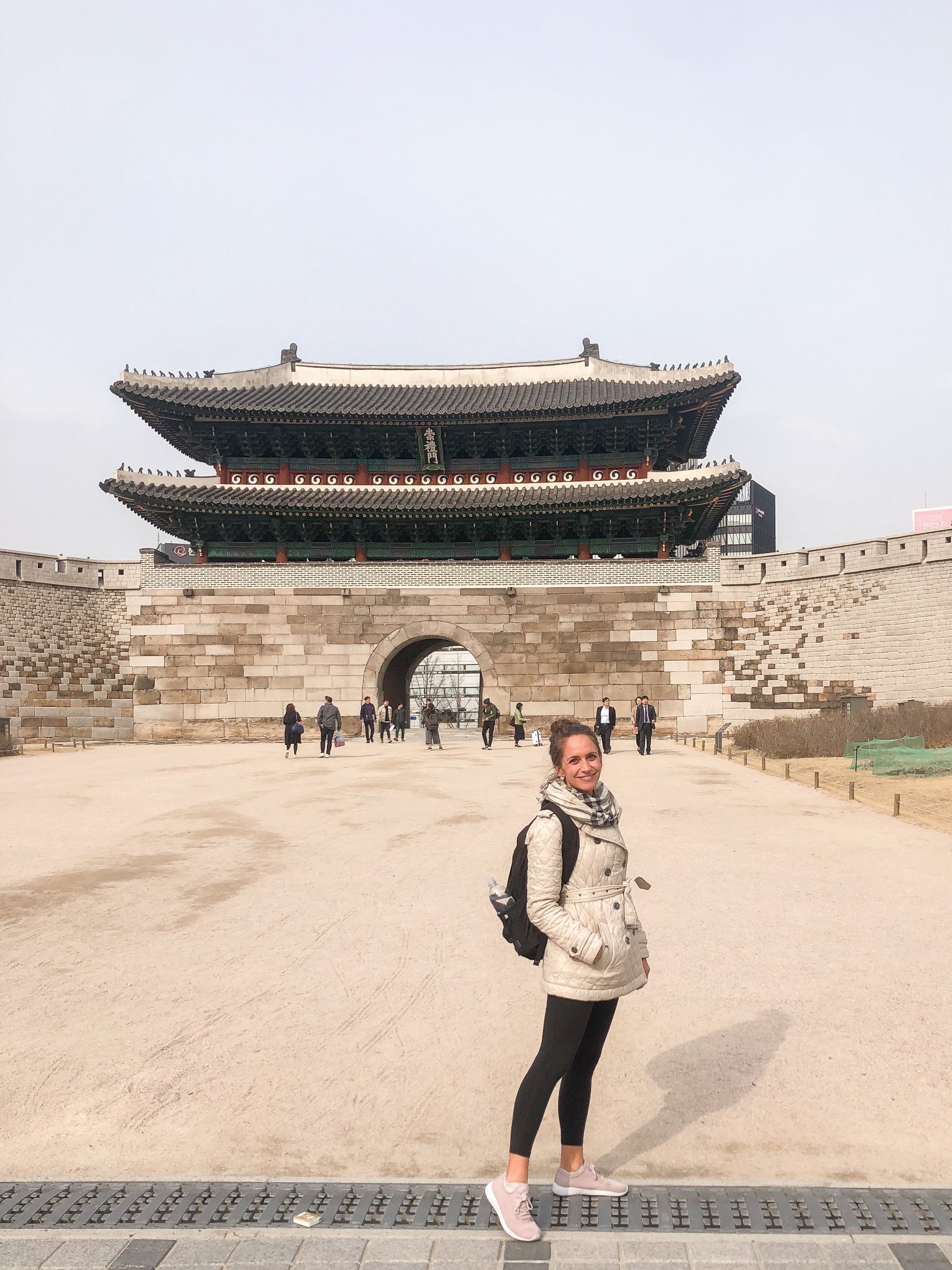 Just past Sungnyemun Gate is Namdaemun Market, which is a sprawling traditional Korean marketplace.  Lots of knickknacks, foods, bags…pretty much anything you can imagine that would be in an Asian street market.  We got a couple little trinkets for the kids and had a fun time wandering around and taking in the interesting sights. 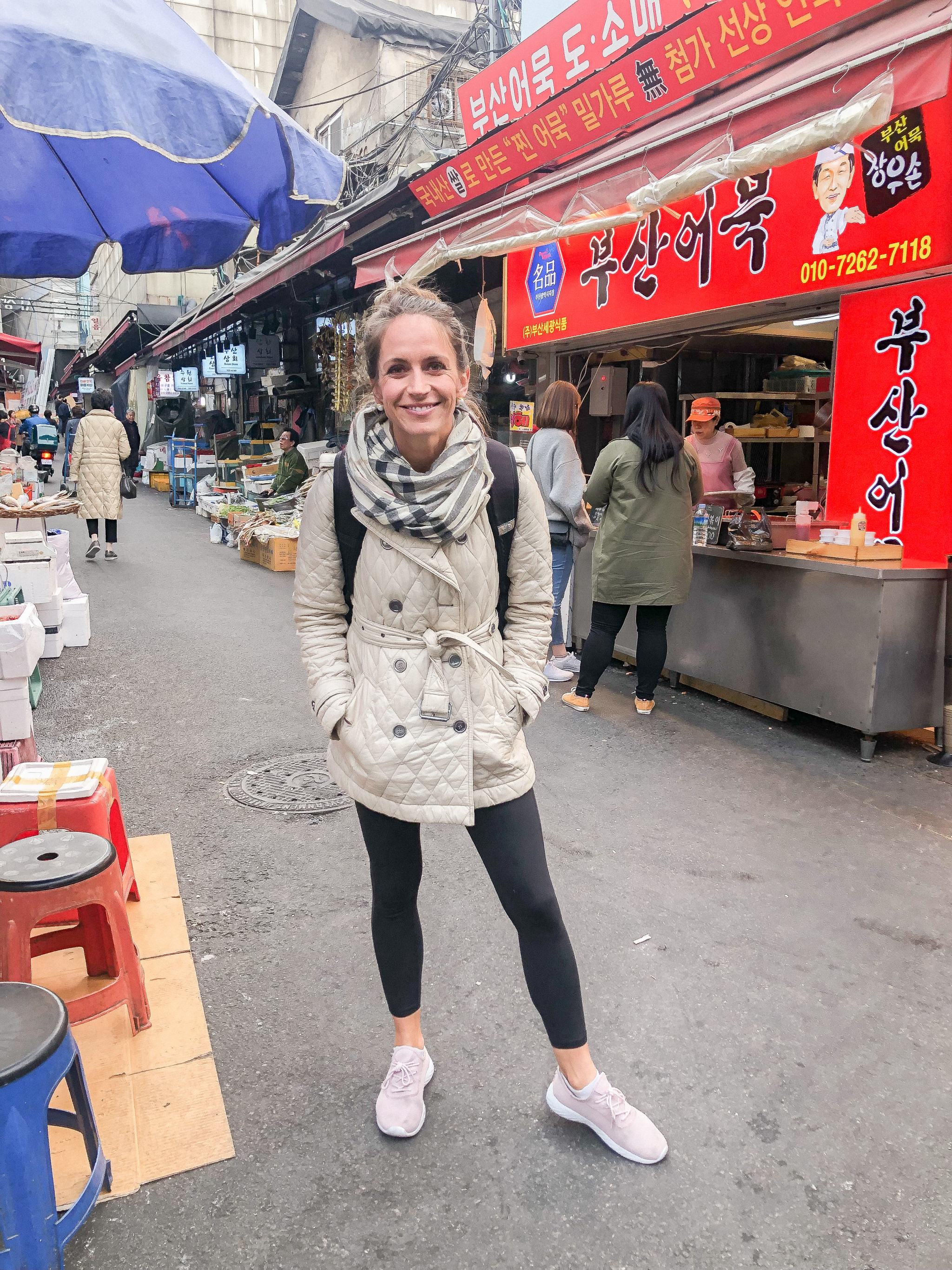 We finally decided it was time to eat dinner so we headed to a traditional Korean BBQ restaurant where you cook your food in front of you.  We had the best meal and the experience was so fun!  The waiter told Tom that he looked like George Clooney, so that made Tom’s day too, haha.  We finally caught a taxi back to the hotel (traffic can be really bad in Seoul so the subway probably would have been smarter, but oh well) and called it a day. 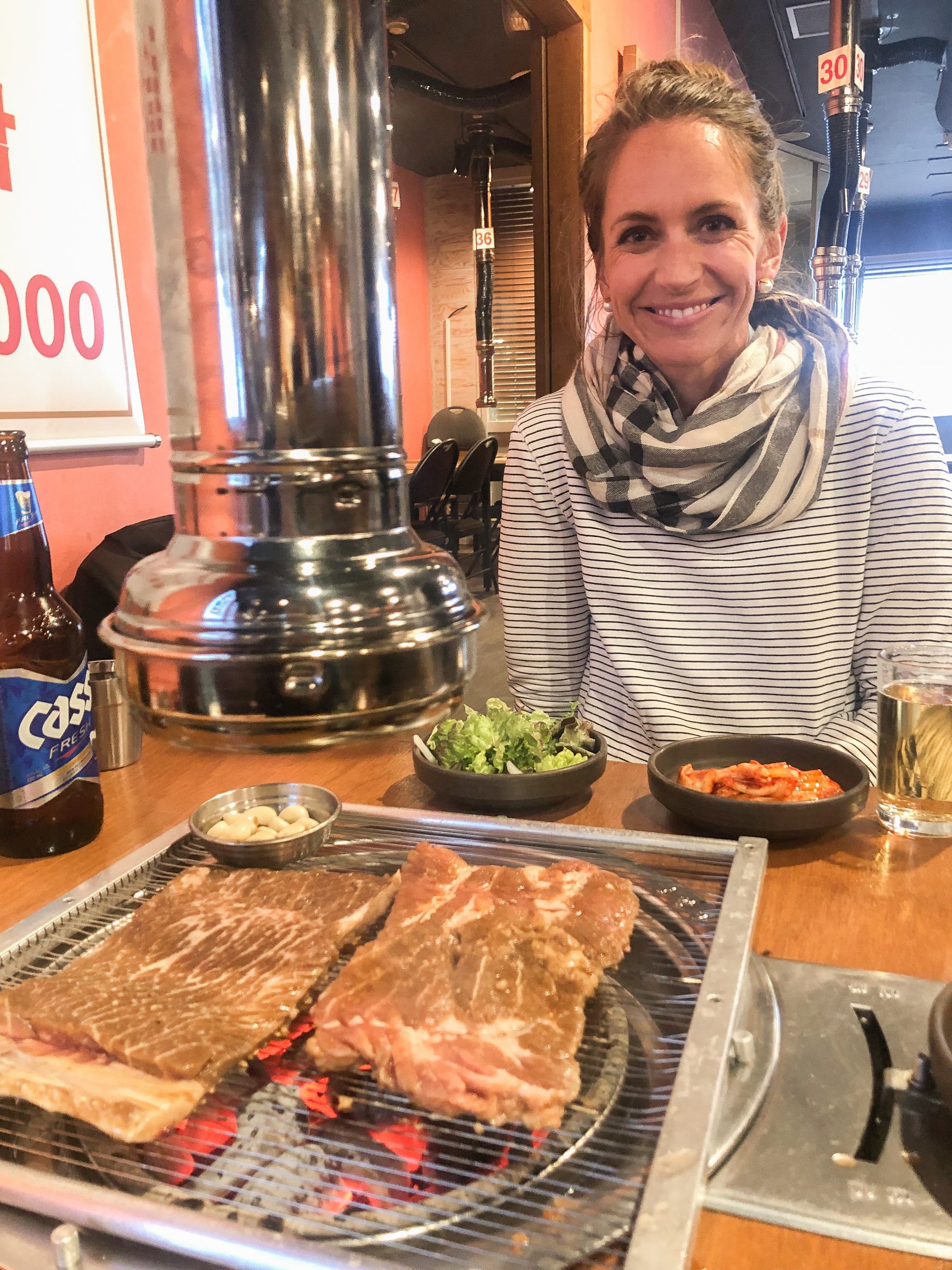 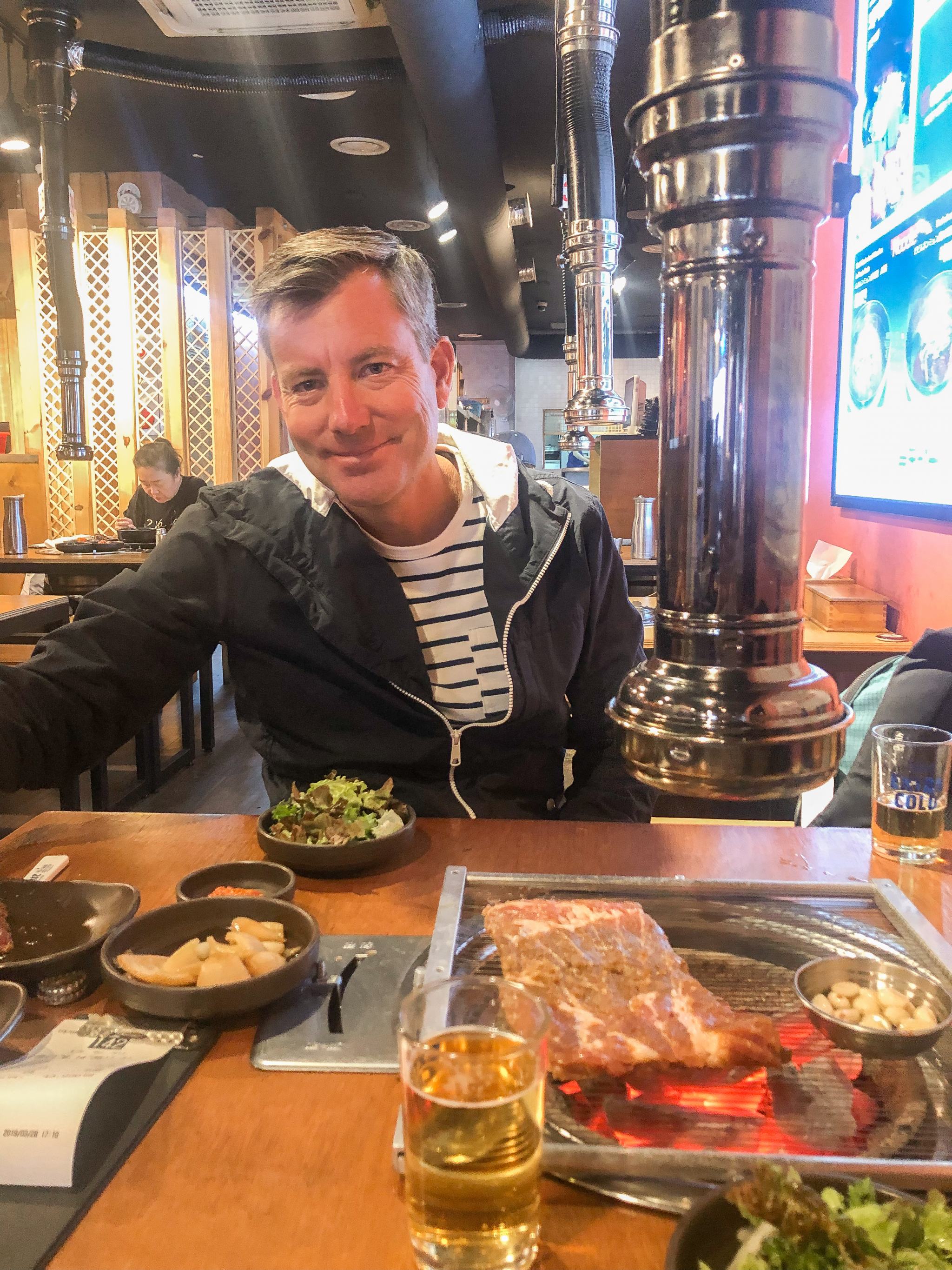 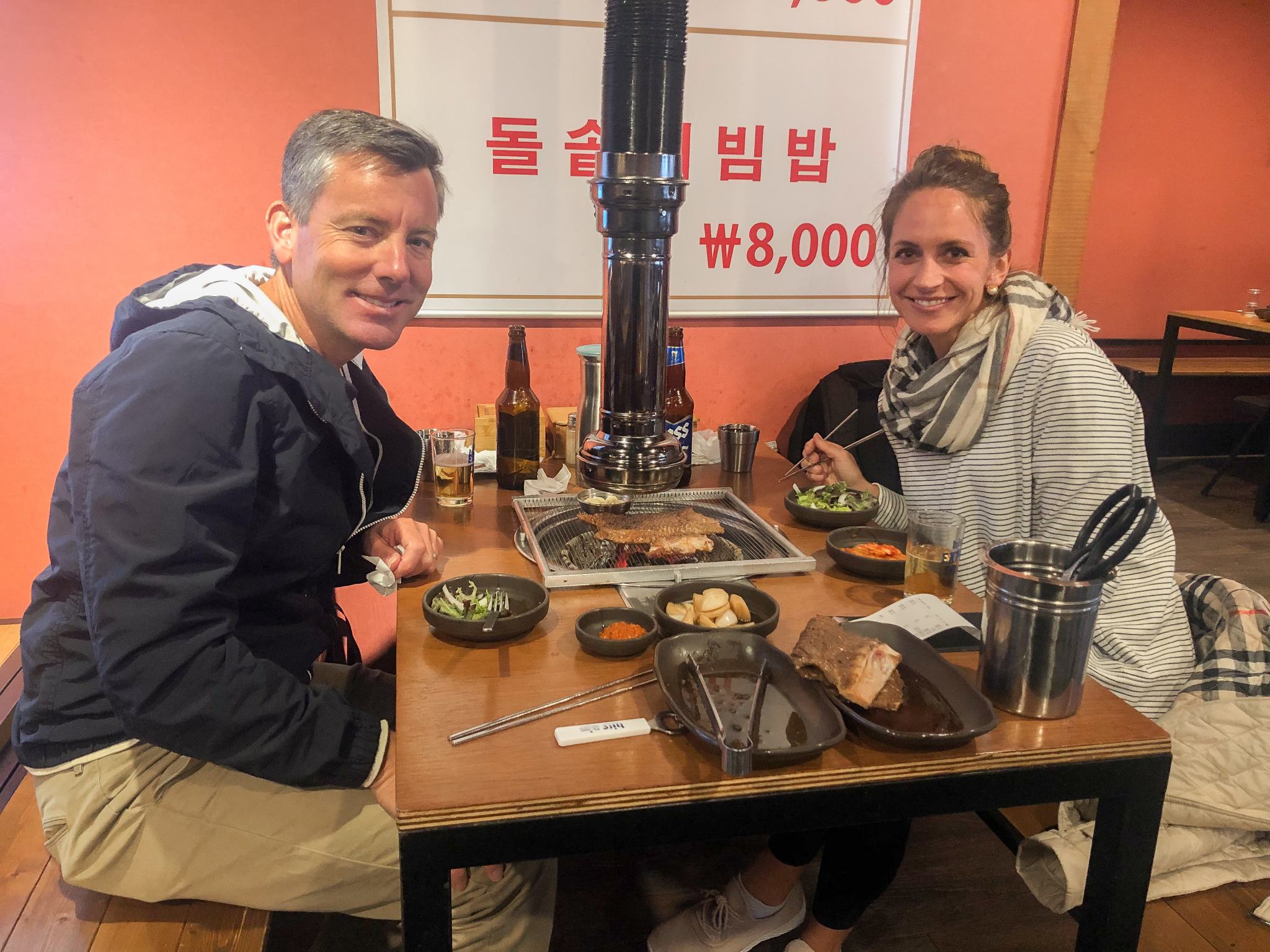 The next day after Tom worked in the morning we visited the Korean War Museum and Memorial, which is definitely worth a visit if you’re even in Seoul (it’s right next to Yongsan).  It helps you really learn what the Korean War was about and it makes you realizing how devastating it was for the country to get split in half the way it was.  Families were separated and the way the memorial depicts the divide (that’s crack through the memorial represents the 38th parallel and those men are brothers, one a South Korean officer and one is a North Korean Soldier and they found each other on the battlefield) is awe inspiring is a really tragic way.  It’s heartbreaking but important to see, in my opinion.  I remember visiting it as a child with my grandfather who had fought (and was wounded) in the Korean War, so it was really important to me that I was able to see it again as an adult. 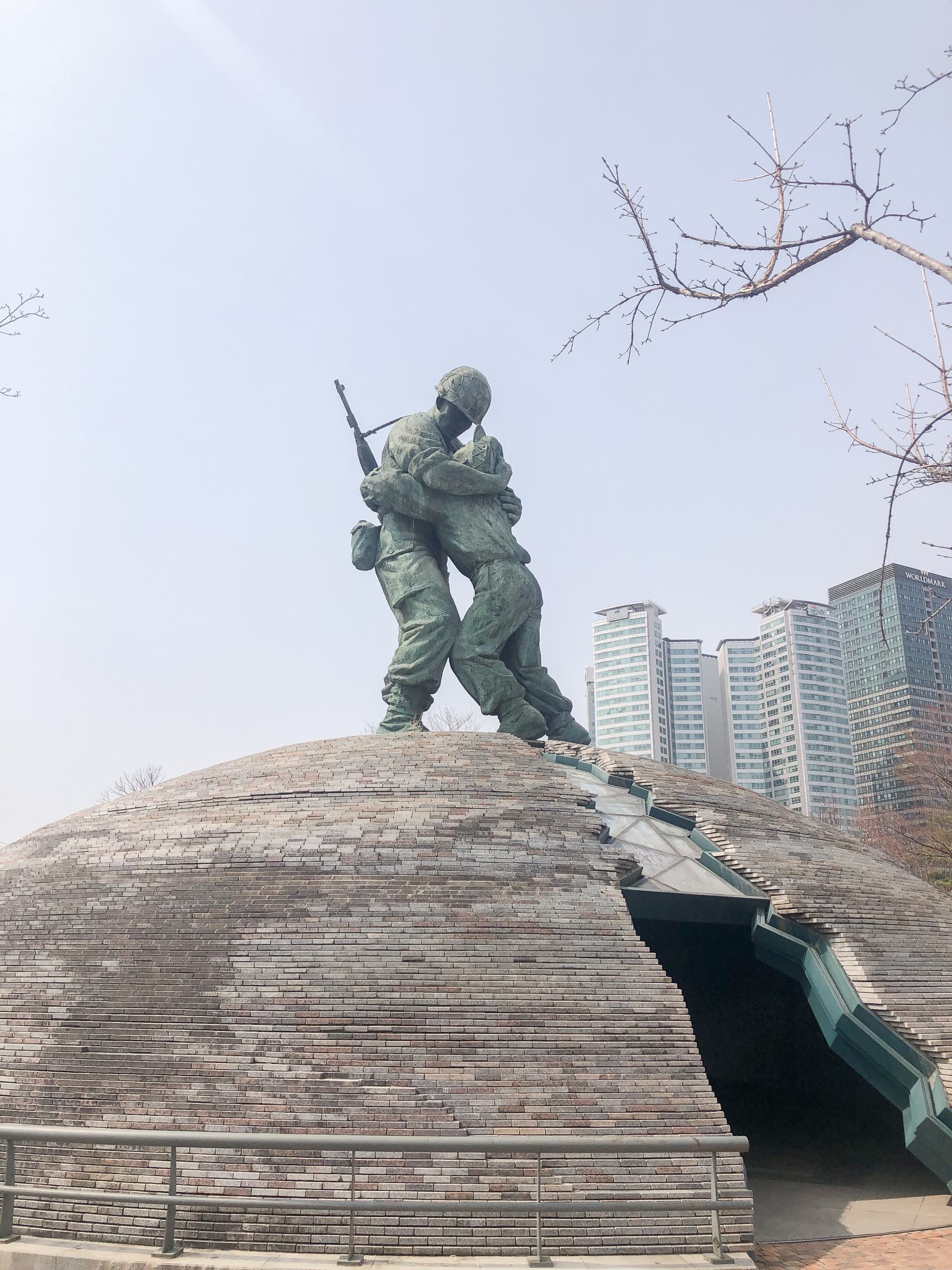 After the museum we wandered around Itaewon again and ate at another really delicious Korean restaurant called Maple Tree House.  This restaurant had the grills on the table too, but waiters did the cooking for you (something Tom prefers lol).  I ate SO much bulgogi, I just couldn’t stop eating.  Our entire table was covered in bowls of food, and we made a really big dent on all of it.

On day 2 I wore my sweater blazer (I own 3 and they are staples in my closet), my favorite super high-rise denim, my Julie Vos pearls, an old cream sweater from J.Crew (this one and this one are similar in style), a vintage scarf I bought in Tokyo (I love this one and this pair from H&M though), my Walmart sneakers (similar here), and tortoise sunglasses (old from J.Crew Factory but here is a cheap and very similar pair, and here is a pricier pair from J.Crew). 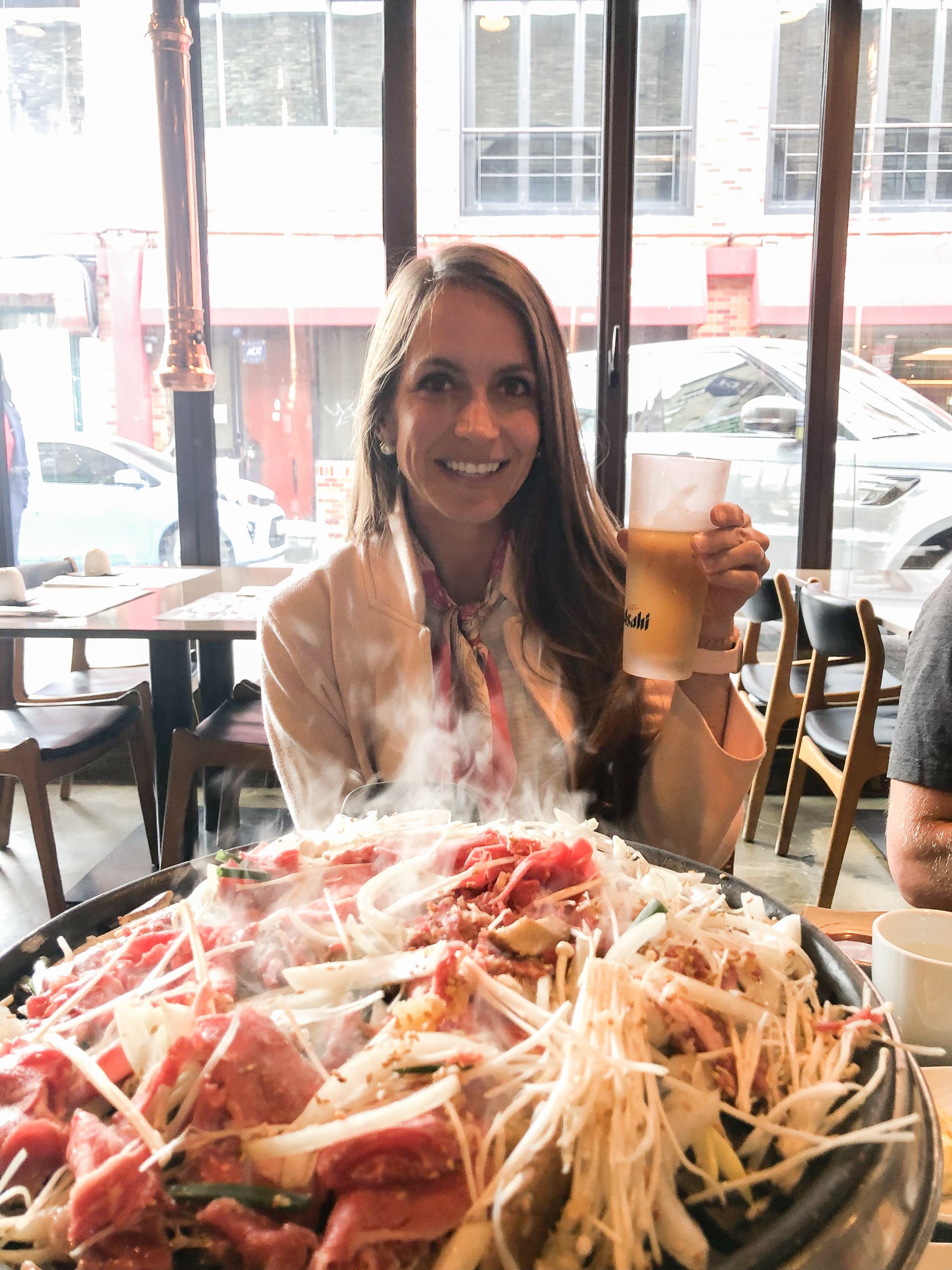 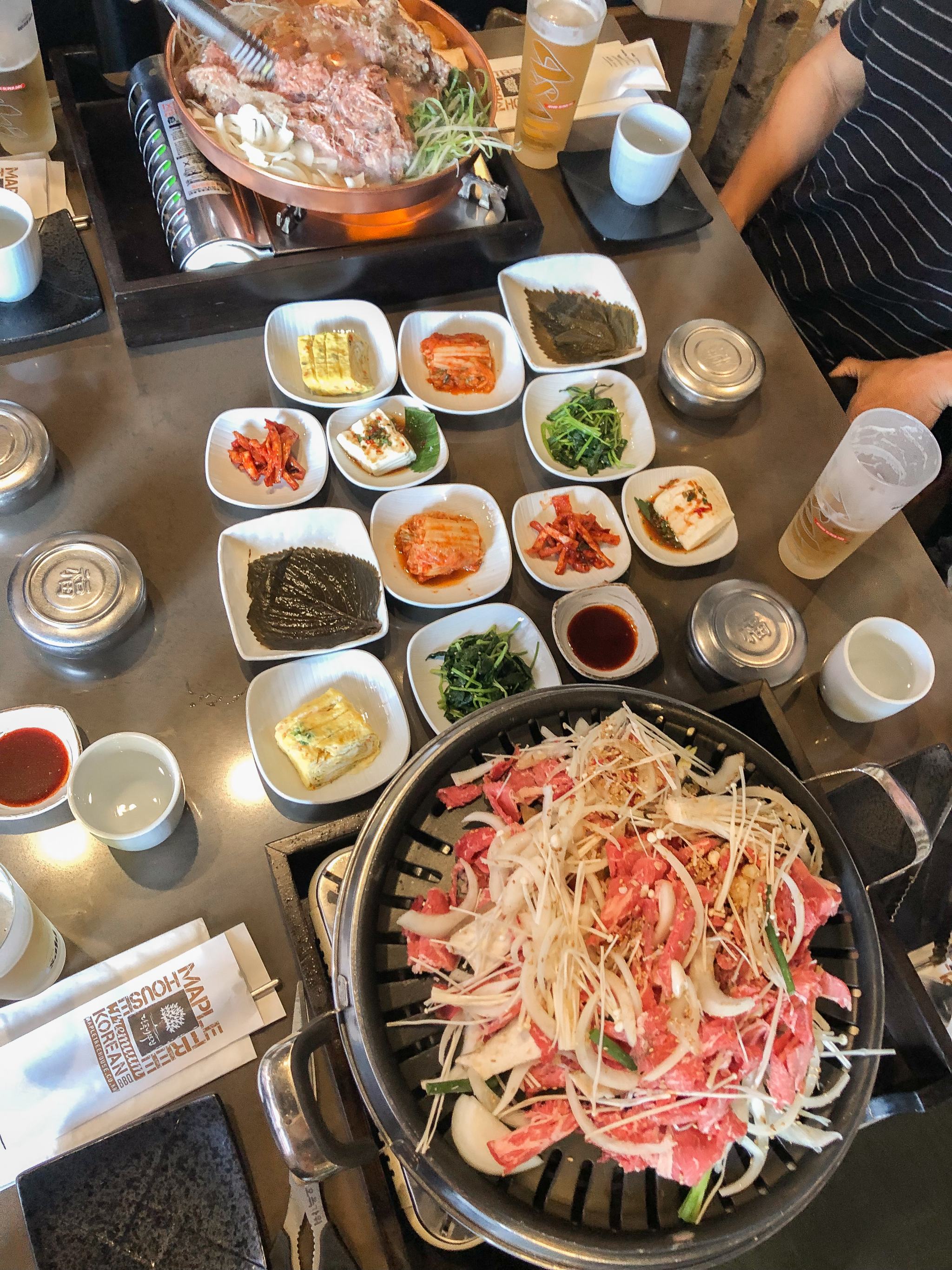 Then we headed out and got some Turkish ice cream.  It almost has a toffee-like consistency and was so good.  The way they scoop it out with a long stick type thing was really interesting too. 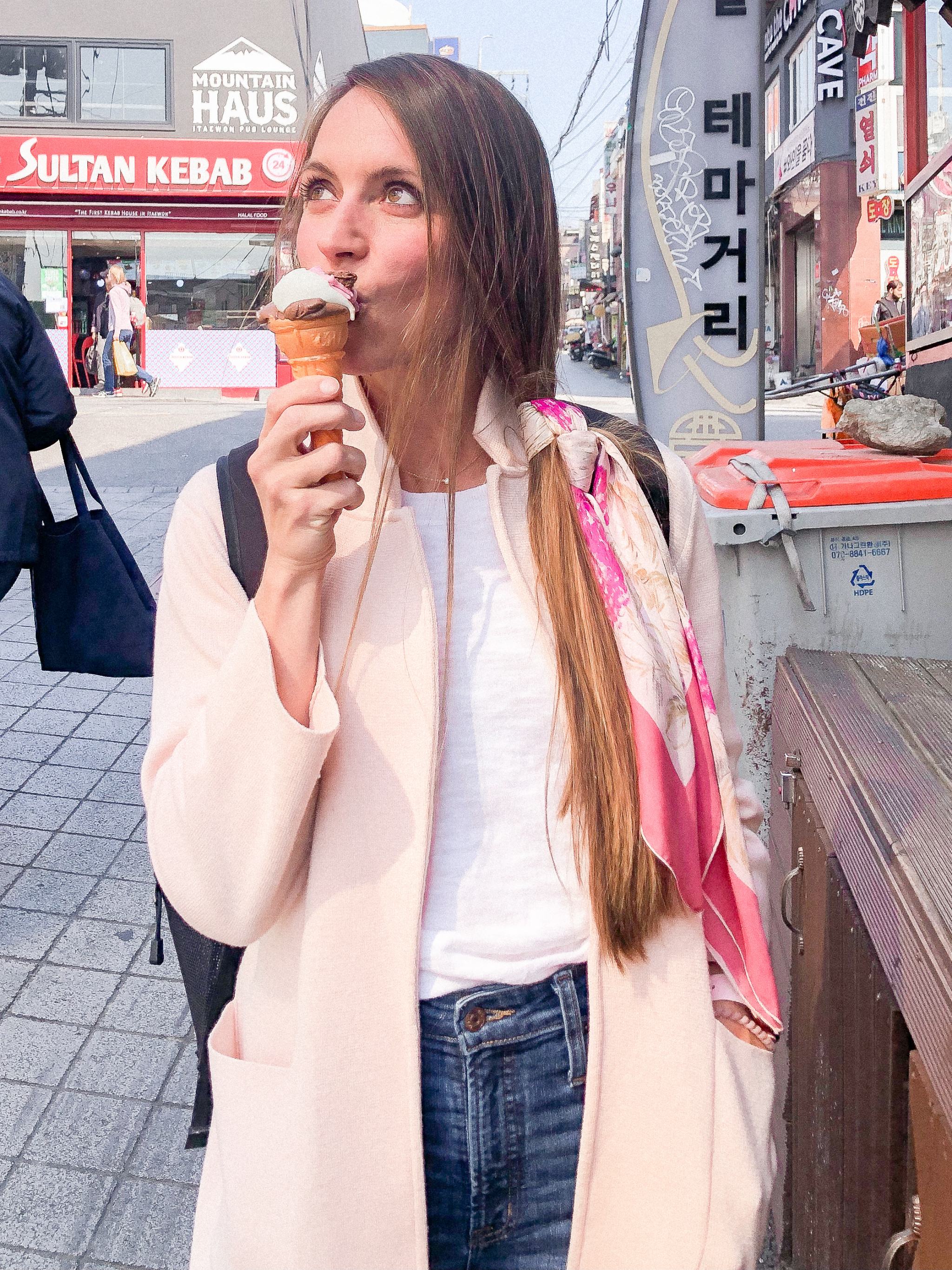 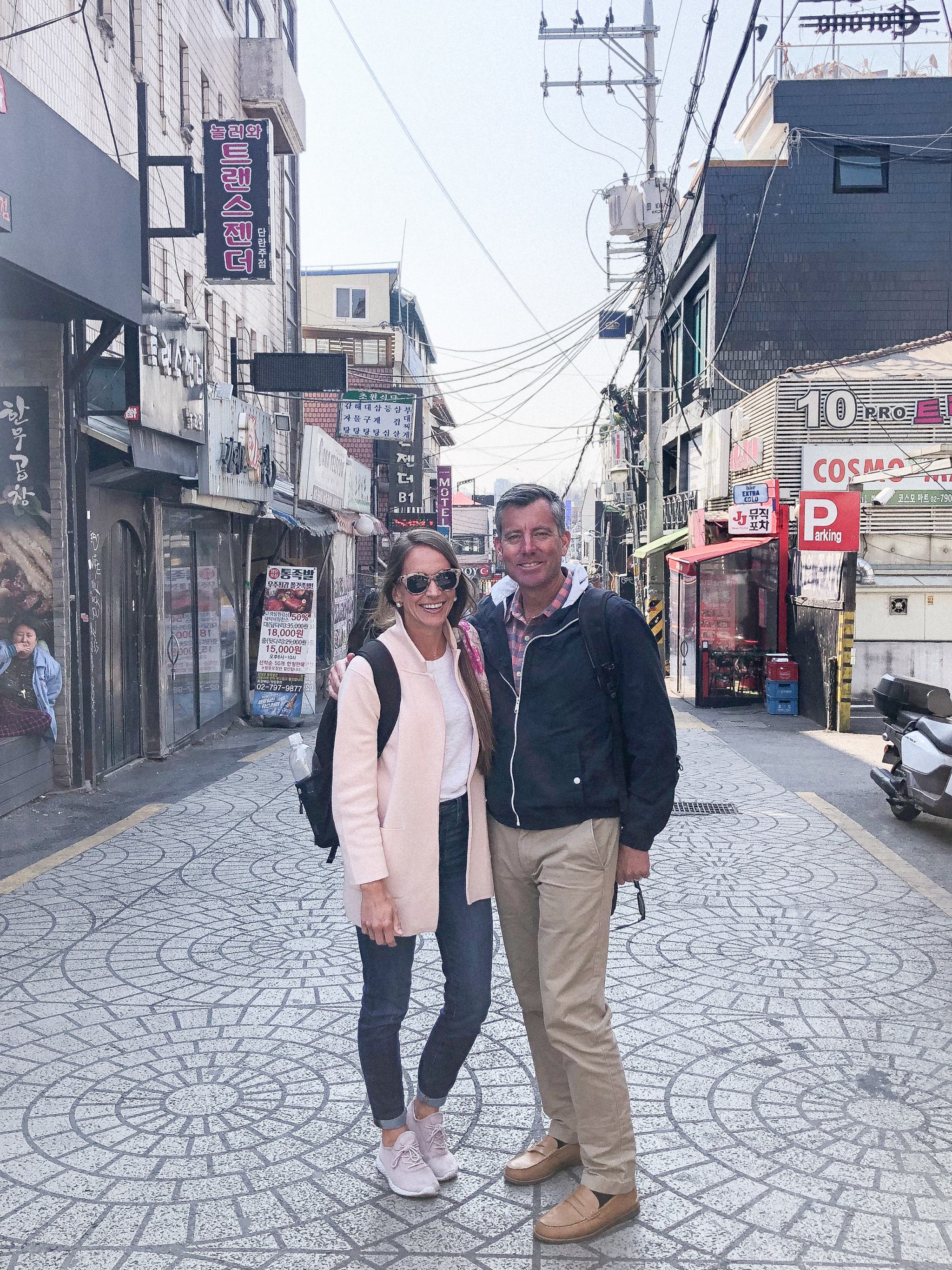 Then I went back to a pottery store that I’d visited the day before and bought my big souvenir of the trip- a large blue and white vase.  I took it as my carry-on on the plane and thankfully it was barely small enough (I didn’t want to pay for shipping…though getting it through customs was another story!).  It’s now sitting on our dining table at home (as seen here) and I love that it has special memories tied to it. 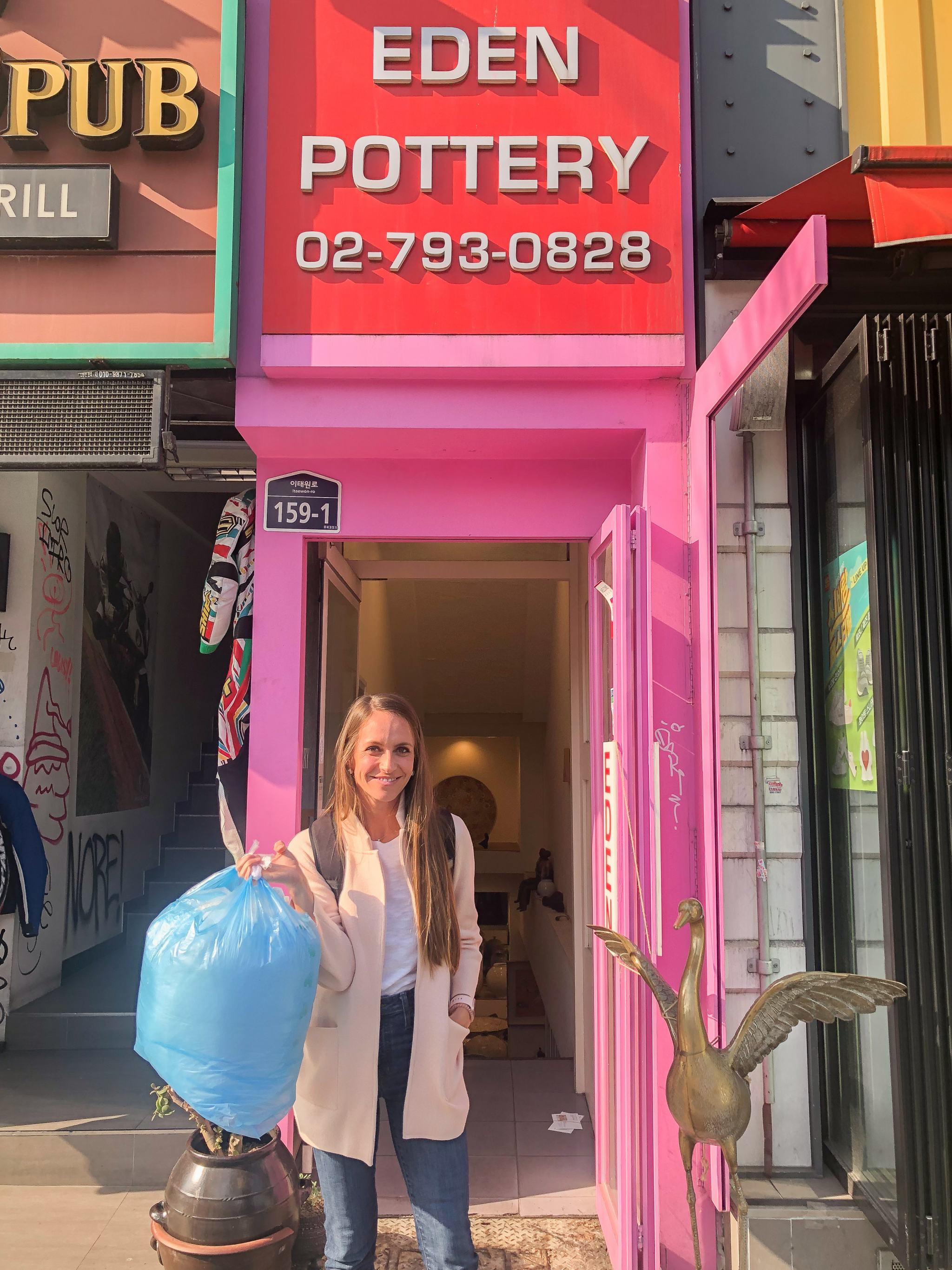 Tom left on a really early flight the following morning but my flight wasn’t until later that evening.  I spent some time at the gym and then took the elevator down to the impressive high-end mall that the Conrad is connected to.  Seriously, I don’t think I’ve been to a better mall.  I ended up at a Mediterranean restaurant and had another incredible meal.  I was ready for a bit of a break from all the meat we’d been eating, so hummus, falafel, veggies and couscous were exactly what my gut needed.  Then I took an Airport Limousine bus to the Incheon Airport and killed another few hours.  The Koreans definitely know how to do airports.  There were play areas for kids, I did an arts and crafts activity at the cultural center, and ate some great food too.  Finally I got on the plane and headed home.  My flight was direct to Honolulu but Tom connected somewhere, so we ended up landing at almost the exact same time.

We were so ready to get back to our babies but gosh we had the best time, even if Tom did work most of it.  I’m incredibly thankful that my parents were willing and able to watch the kids and I’m glad we decided to spend the money and buy my plane tickets so that I could tag along on his work trip.  International travel, especially when the language is so very different from your own, is always a bit intimidating but it’s so good to force yourself to get out of your comfort zone.  I grew so much on this trip by deciding to get out and explore on my own.  It was confidence boosting, for sure!  There are always uncomfortable moments when you can’t communicate or do the wrong thing because everything is so different, but travel is also such a rewarding experience that is always worth it in the end.