Confession: I’ve deliberately not shown Jack using a pacifier on Instagram for the past year because I was embarrassed and didn’t want to get shamed by moms who had something to say about it.  As with breastfeeding and every other aspect of parenting, pacifier usage is a very personal thing and every child is different.  Some kids don’t care a thing about them and some kids get downright obsessed.  I’d say we were in the “obsessed” category up until this past weekend, when we finally decided it was time to wean him from his pacifier at 3 and a half years old.  I mentioned this on Instagram and got a number of messages and requests to share what we did, so here is the technique we used and hopefully it’ll work for you if you think your child has the right kind of personality for it! 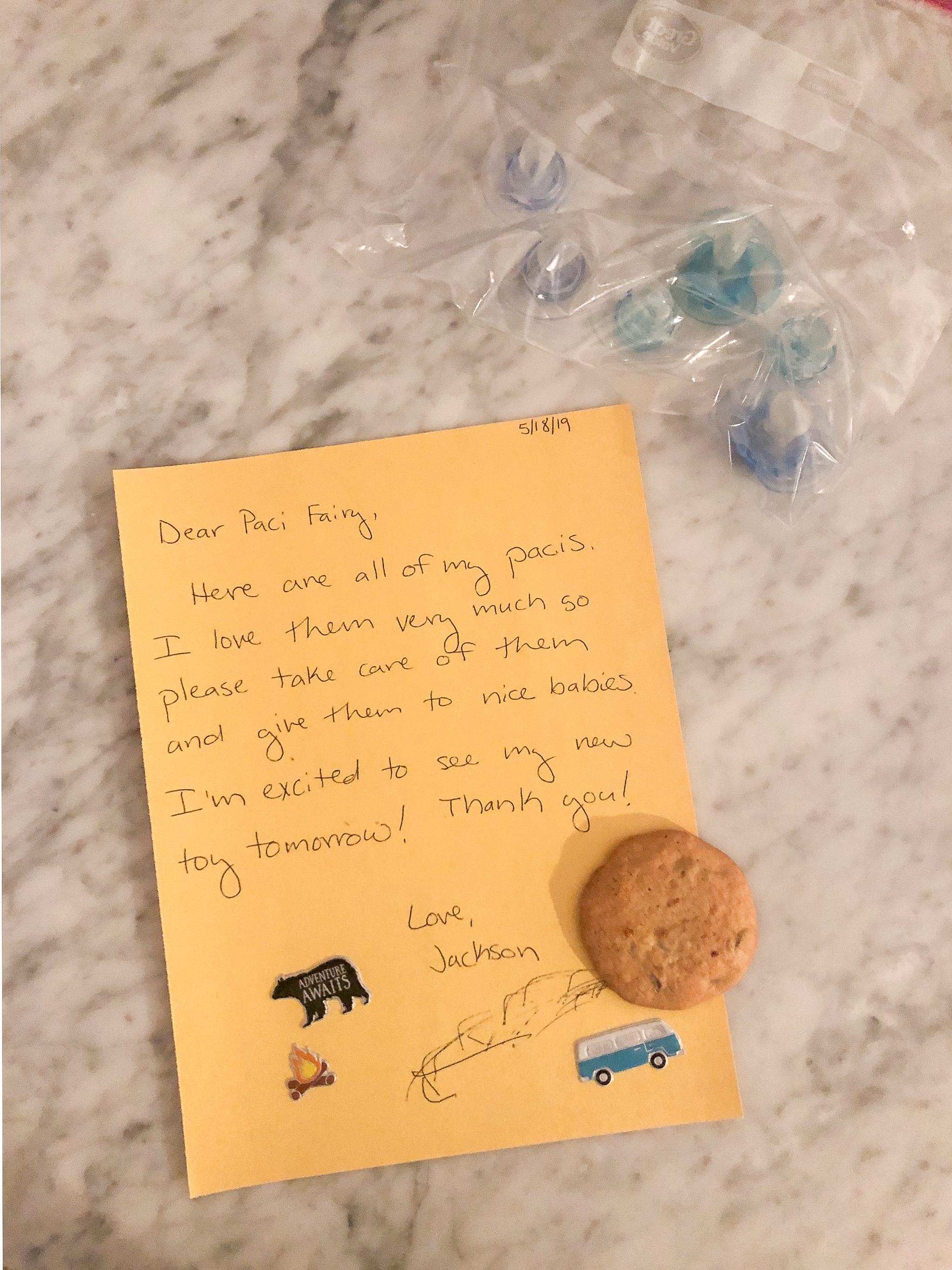 How We Weaned our Toddler from his Pacifier

But first, let me share how Caroline (20 months) recently weaned herself from her pacifier, because I don’t think we would have been able to get Jack to quit as easily if she was still using one.  A few weeks ago she dove face first off of the soft ottoman in our living room.  I had been sitting in a nearby wingback chair and would catch her dives, but we’d stopped doing that for a few minutes and I thought that activity was over.  Well, she wasn’t quite ready for it to be over and she dove without me knowing it.  Her face hit the solid wood leg of the chair and needless to say she got pretty hurt.  She busted her lip and nose and they were swollen for days.  While she was crying and calming down after the accident she was chewing ferociously at her pacifier (a giraffe WubbaNub).  She ended up chewing a hole in it, so I went and got her only other pacifier, an elephant WubbaNub.  She took that one enthusiastically and while she was slowly calming down in my husband’s arms I went and cut the paci part off of the giraffe, so that it was just a small little stuffed animal.  I’d heard that some kids like the comfort of having the familiar object even if there is no pacifier on it, but not Caroline.  She looked at me liked I’d just massacred something sacred and she wanted the giraffe out of her site immediately.  Fast forward a couple of days and the elephant WubbaNub accidentally falls out of the stroller in the mall parking lot.  Luckily I’d bought 2 replacement giraffe WubbaNubs so figured she’d be happy with that once we got home.  Well let me tell you, when she took a look at them she fussed and could not get far enough away from them.  I guess she remembered what I’d done to the original giraffe and she promptly weaned herself from pacis and has not asked for one or needed one ever since.  We offered them a few times but she flat out refused and was offended we’d even suggested them.  We’re still pretty shocked (and humored) by her stubbornness, but it ended up workout out well for us!

Now on to Jack…he looooooooved his pacifiers.  He hadn’t been using one for naps at school for 7 months but as soon as he’d get home he’d ask for one.  We’d sometimes let him have one for a few minutes (sometimes it was the only thing that would chill his intense personality) but most of the time during the day he no longer used them.  At bedtime they were essential though.  I had thought about weaning him earlier but with his speech and (slight) developmental delays I knew he just wouldn’t quite get it until this point.  I know that if we’d taken it any earlier he would have just whined and would have been angry because he didn’t understand.  At 3.5 years old (and with his little sister already weaned) I knew it was finally time, but it had to be a technique that worked for his personality.  We had already tried reading the book Bye Bye Binky but it had no impact on him.

Finally, I came up with the Paci Fairy.  We told Jack that in a few days he would get to leave all of his pacis for the Paci Fairy and she would take them to babies that could use them and she’d give him a really big toy.  Well, for the kind of kid that Jack is, this worked perfectly.  He sat with me (paci in his mouth) as I wrote the Paci Fairy a letter, and all of his other pacis were in a plastic bag.  After I finished the letter he promptly (all on his own…I’d planned on letting him use it until right before bed) took his paci out of his mouth and put it in the bag.  He went to bed without an issue, did not wake up once and slept a bit later than he has in a while (we still use the green light clock which I blogged about in this post here).  He woke up and was so excited to see his present, this really sturdy wooden crane, that I’d seen Michelle of Iron and Twine rave about! 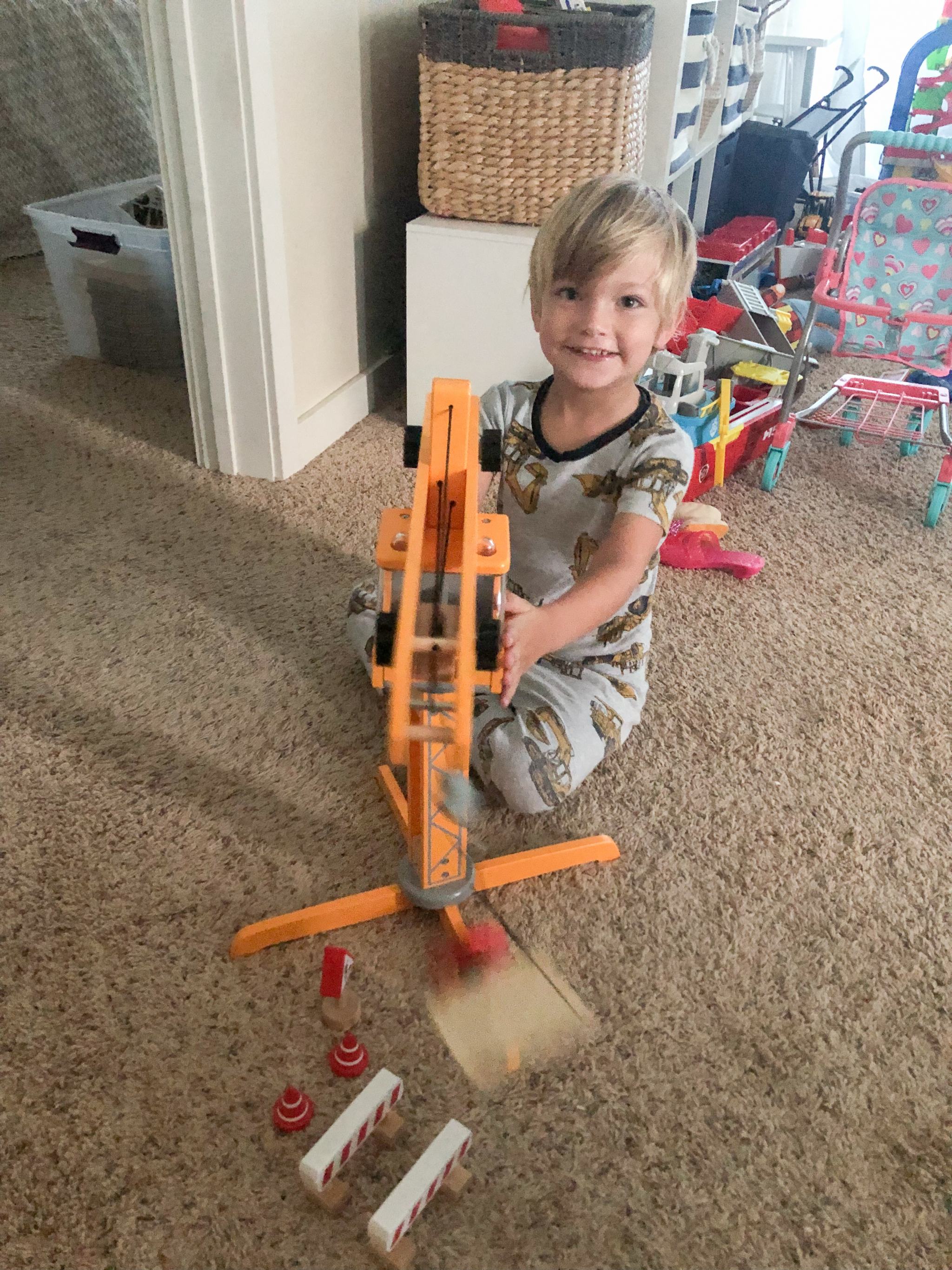 Jack had broken his plastic crane a few weeks prior and I knew he’d love that it was strong enough to lift heavier things and not fall over constantly.  He was so proud and mentioned the Paci Fairy taking the pacis to give to babies and that’s pretty much been the end of the discussion.  He has asked for a paci a few times these past few days but we reminded him that he’d given them up for the toy to help other babies, and then he’d drop it (though he did cry very briefly one evening).  Nights 2, 3 and 4 went just as well as the first night, and I’m so proud of him and relieved that we’re finally a no-paci household!  I looooooved that both of my kids used pacis because it really helped them chill out (neither of them have a mellow bone in their bodies) but it’s good to be over with this phase and I’m so glad it wasn’t a drama filled event.

If you try this technique I’d love to hear how it works for your family!