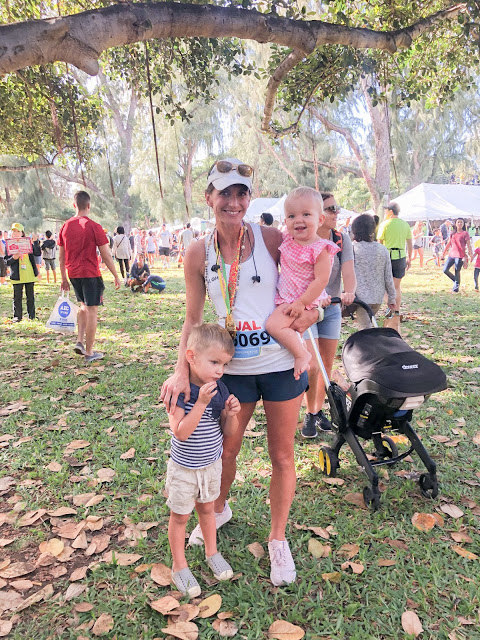 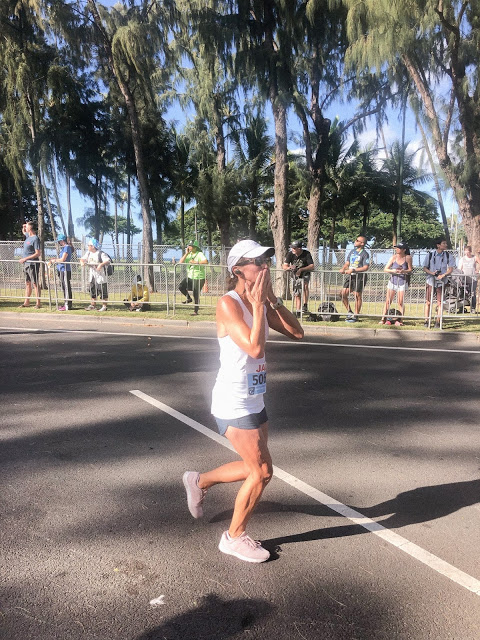 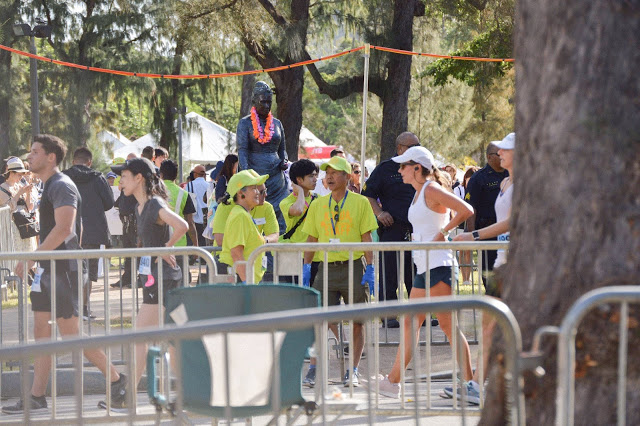 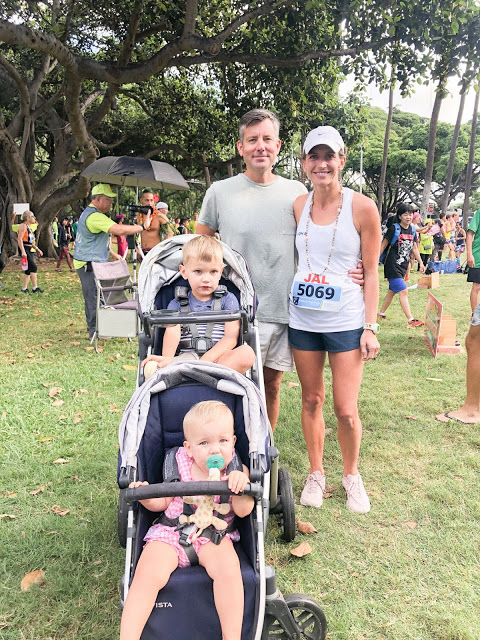 sneakers | wireless headphones (I love these so much I gave Tom a pair for Christmas) | Koala Clip phone holder (clips to the back of your sports bra) | running shorts (current version) | tank top (minus the “aloha” which is a local Hawaii lululemon offering) | running socks (current version) | running hat (current version) | sunglasses
My sixth marathon was about a month ago, and I finally had a chance to sit down to write about it.  December was a busy month with Christmas and lots of family and friends visiting so once the race was over it was party mode! 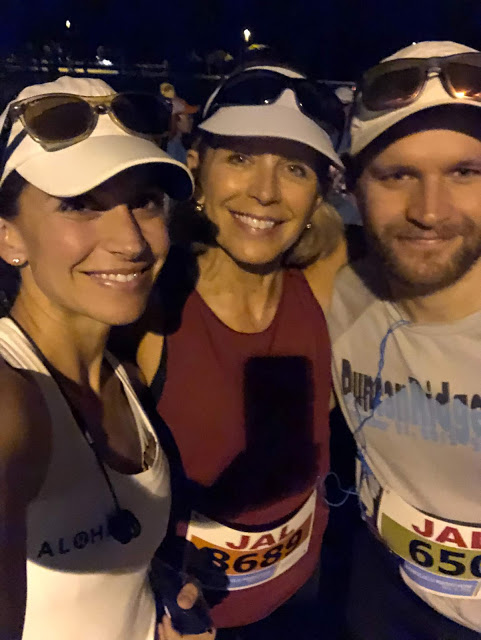 The morning of the race was a bright and early one.  With a 5AM race start you have to wake up around 3AM in order to eat, drink coffee, get ready and get to the race in time.  We stayed at the Hilton Hawaiian Village Hotel so that we could walk to the start of the race easily (a little over half a mile away).  The Honolulu Marathon has over 27,000 participants and it’s the fourth largest marathon in the US.  I had forgotten just how large it was (I ran the race back in 2011) and we should have gotten an earlier start.  Even though we left the hotel with plenty of time we wasted a lot of it in line for the portapotties and then we got stuck really far back and weren’t able to start as far up as we should have.  My goal was to run a sub-3:40 marathon, which required a pace of under 8:26 per mile, and I wasn’t able to get remotely close to that pace until mile 6 because there were so many walkers and slower runners in front of me.  I spent all that time zigzagging in and out of people and I know I added a good amount of unnecessary mileage by simply trying to get around people.  By that point I knew I wouldn’t be able to make up the time, so I decided I’d just try to do as well as I could and try to enjoy it all. 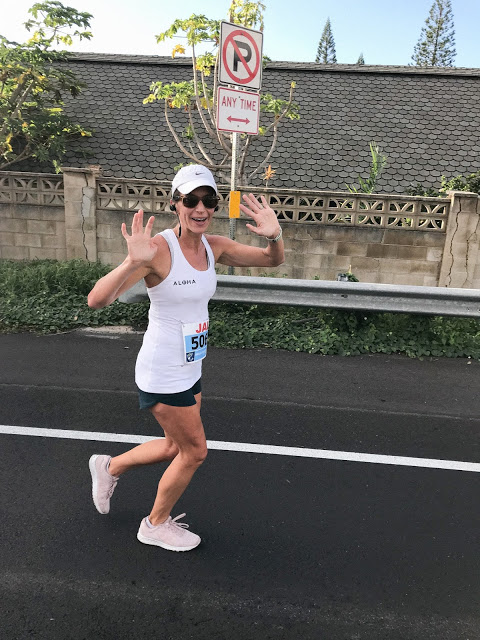 My brother, Nathan, and I started the race together (we kissed our mom, who also ran, goodbye before the start) but quickly realized that it would be too tough to stay together because there were so many people.  We parted ways about about 3 miles and just ran our own races.  He’s an incredible athlete and has finished many ultramarathons but he wasn’t able to train for this race as well as he should have due to work and grad school.  I trained pretty well and got all of my long runs in, but I realized quickly that I didn’t do enough speed work to keep my goal pace.  I felt pretty good for the first 9 miles and then my glutes started to tighten up.  I stopped for a super fast bathroom break right before leaving the Diamond Head area and by the time I got to Kalaniana’ole Highway my legs felt so tight that all I wanted to do was stretch them out. 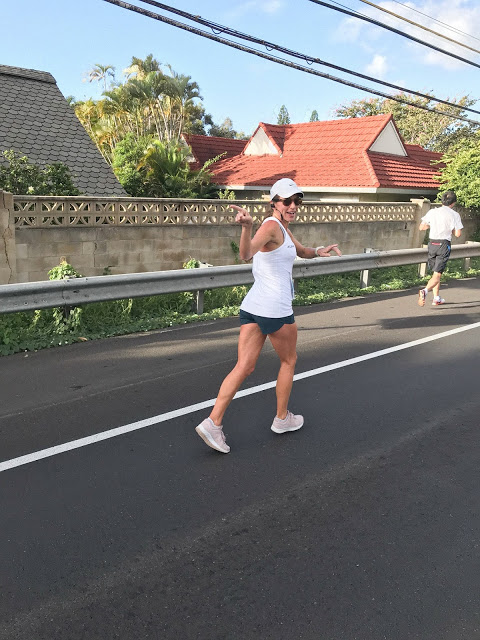 If you speak to anyone who has run the Honolulu Marathon they’ll likely say that the worst part of the race is the portion to and from Hawaii Kai.  It’s a long, flat, straight highway and you’re running by racers going in the opposite direction (so you’re seeing everyone who is ahead of you on the way out and then everyone who is behind you on the way back) and it just seems like it will never end.  The sun can get pretty hot too if you aren’t done with that part before the sun gets higher in the sky!  My dear friend Steph and her family were so sweet and they were there to cheer for me in two different spots in that area.  It made such a difference and really pepped me up and kept me going.  And it was so cute to see her kids holding signs that they’d made for me! 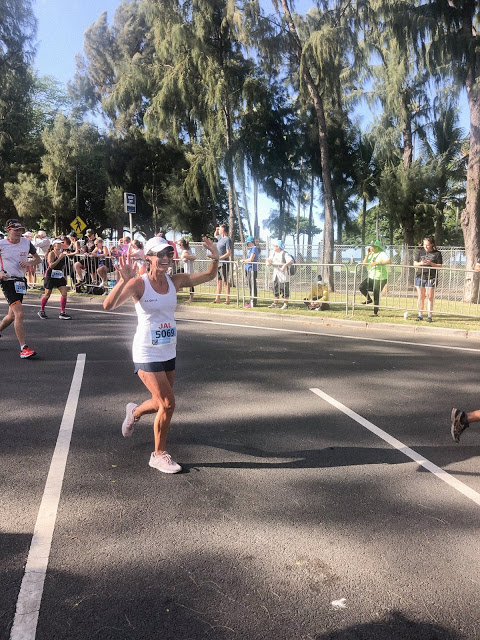 Nathan and I somehow linked back up somewhere around mile 15 and ran together for a bit, but eventually I ended up taking the lead and we didn’t see each other until the end of the race.  We also passed our mom (going in the opposite direction) so it was nice to see her face so that we could cheer each other on. 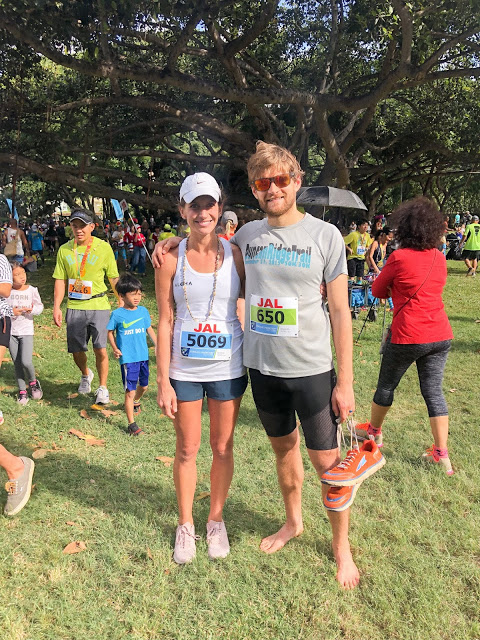 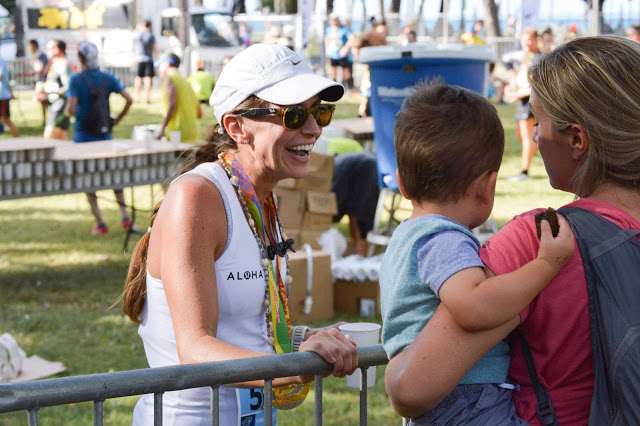 I had to stop and walk a few times from mile 17 until the end.  I also had to stop and stretch my legs because they would not quit tightening up!  It was painful and frustrating but thankfully I’d already given up on my goal time so I didn’t beat myself up for it too badly.  After I gave up the sub-3:40 goal I decided that I wanted to still try to beat the time it took me to run it in 2011, which was 3:56 (my very first marathon).  Once that goal went out the window I was still hopeful I’d break 4 hours, but in the end I finished in 4:08.  Fresh, hot malasadas (Portuguese donuts similar to beignets) were served to all the finishers and I don’t think anything has ever tasted so good! 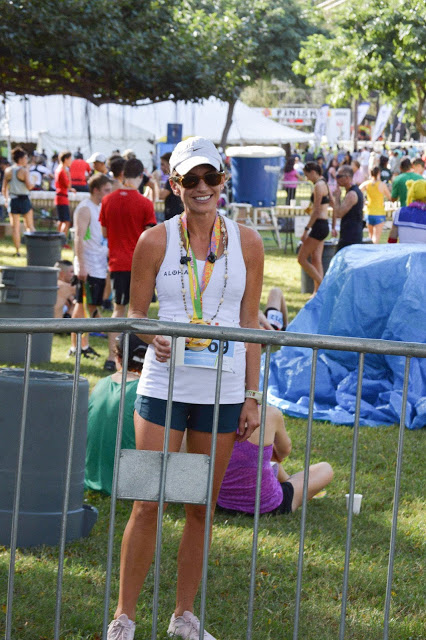 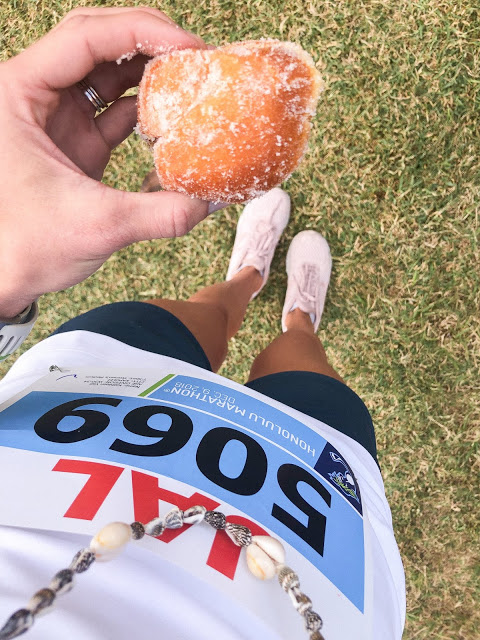 It’s my slowest marathon to date, but as the mom of a 1 year old and a 3 year old living far from family with a husband who worked terrible and unpredictable shift hours the entire time I was training I’m really proud of my accomplishment.  I’m not sure if I’ll ever run another one (they really are so tough on your body and rather miserable at times haha) but I’m so happy to have another marathon under my belt.  I now know I that if I ever want to get a PR (my best time is 3:40, which is why my goal was sub-3:40) I definitely need to do more speed workouts and also run my long runs closer to race pace.  I tend to just plod along and maybe that just won’t cut it if I want to finish that fast.  All in all, it was wonderful to run the race again, it was special to run it with my mom and brother, it was emotional and made me so proud to see my husband and kids at the finish line, and I’m grateful my body is able to tackle such a challenge.
If you’re interested, below are all of the posts I wrote about training for this marathon, and here is a link that will let you scroll through all of the posts I’ve written about marathons over the years.
How to Prep the week of Your Marathon
Marathon Training Update, 11/26/18
Marathon Training Update, 9/21/18
28 Hours in Waikiki
Marathon Training Update, 9/5/18