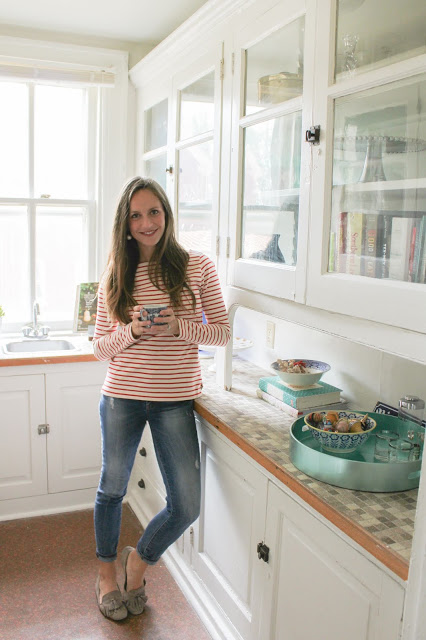 jeans (similar) | loafers (old but these and these are similar) | shirt (old, similar)
I like to improvise in the kitchen but I also enjoy having a list of go-to recipes that I know are healthy and delicious.  So here are some of my favorites that I’ve found online that I turn to time and time again.
Ina Garten’s Lemon Chicken Breasts.
When I cook chicken I almost always use this recipe.  It’s lemony and garlicy and always turns out well.  I use boneless skinless chicken breast and normally just use extra lemon juice if I don’t have a real lemon to zest.  I’ll serve it with one of these prepackaged quinoa and brown rice packets I buy at Costco and a vegetable like sautéed zucchini, roasted brussels sprouts, roasted asparagus, or steamed broccoli.  Make sure to reserve the juices from the pan because that stuff is gold!  I drizzle it on the chicken and the rice and veggies and always save it and find a way to use it later on for another meal.
The next day, if I have leftover chicken, I’ll often shred it and make chicken salad (loosely using this recipe from Plum Pie).  I place it on top of baby spinach or arugula and sometimes make a sandwich with it on whole wheat bread.  I normally use greek yogurt as the base but sometimes use a mix of avocado or mayonnaise too.  Walnuts, crasins, and apple are my favorite stir-ins.
The Forest Feast’s Roasted Cauliflower and Corn Tacos. 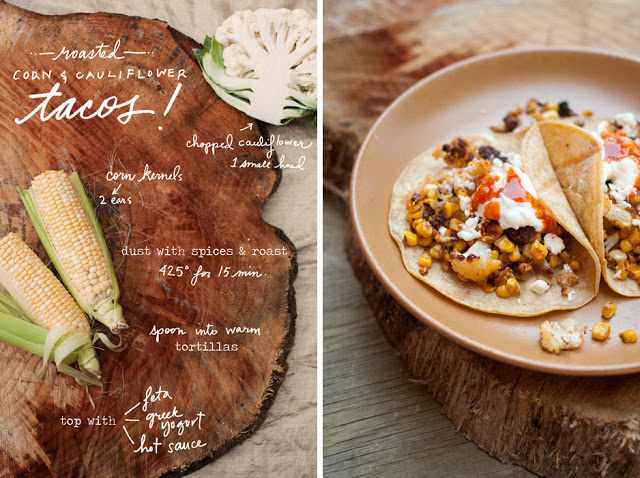 If I could only recommend one cookbook it would be The Forest Feast.  And I’m not even a vegetarian.  It is my most-used cookbook and it’s chock full of simple and delicious recipes and the entire book is beautiful.  This is one of my favorite recipes from it and I have been using it as a guide for years.  Even Tom who really doesn’t like cauliflower loves these tacos.  Sometimes I’ll make a similar version using sweet potatoes, sometimes I’ll also add onions to the roasting pan, or sometimes I’ll even add chickpeas.  It really is a very versatile meal and I just use whatever veggies we have available.  We top with greek yogurt, avocado, feta cheese and Texas Pete hot sauce.  If you’ve never eaten corn tortillas before make sure you don’t skip heating them up in a skillet.  It’s a very important step that only adds a little extra time.
Salmon with Sweet Chili Sauce. 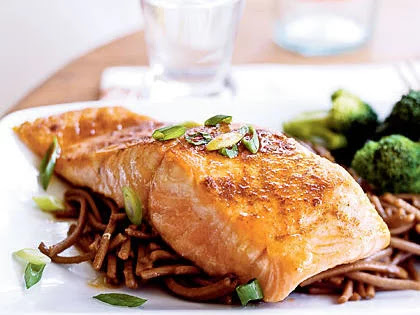 We don’t eat fish as often as we should but this is one of my go-to recipes for salmon.  The sweet and spicy sauce tastes so good on the fish and the veggies and it’s super easy to make.  Sometimes I make the sauce and use on shrimp instead.  I love soba noodles (which this recipe calls for) but often substitute brown rice and quinoa packets from Costco.  Most of the time I’ll also serve it with sautéed frozen mixed veggies (the stir fry vegetable blend from Costco is always in my freezer).
Michelle’s Lowcountry Shrimp and Grits. 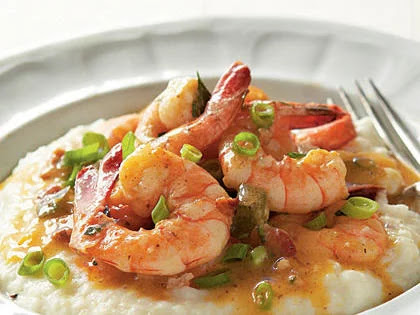 Ok so this meal is NOT healthy at all, but it is so delicious and I make it every couple of weeks as a special treat.  Growing up going to the beach in South Carolina has resulted in me having a very high standard for shrimp and grits.  I’ve tried countless varieties over the years, and you know what?  Once I discovered this shrimp and grits recipe even the most expensive restaurant dish does not even compare.  I normally just use frozen shrimp, use pinot grigio (what we drink) rather than Madeira, and sometimes use frozen bell peppers instead of poblano (they’re difficult to find here for some reason).  I normally just used quick cook grits to save time, and I also typically just use whatever cheese we have for the grits.  (I actually cooked risotto the other day since we didn’t have grits and it was a delicious substitute!)  Often I’ll use freshly grated parmesan, sometimes I’ll use gouda, and sometimes I’ll use shredded Mexican-blend cheese.  You really can’t go wrong.  If you’ve never tried shrimp and grits before I promise this is worth the effort.  Sure, it sounds weird but it has such a deep, complex flavor that is absolutely delicious!
All images are from their respective websites and linked in the recipe titles.