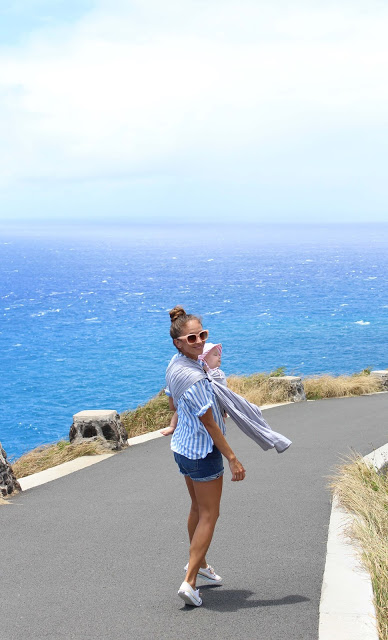 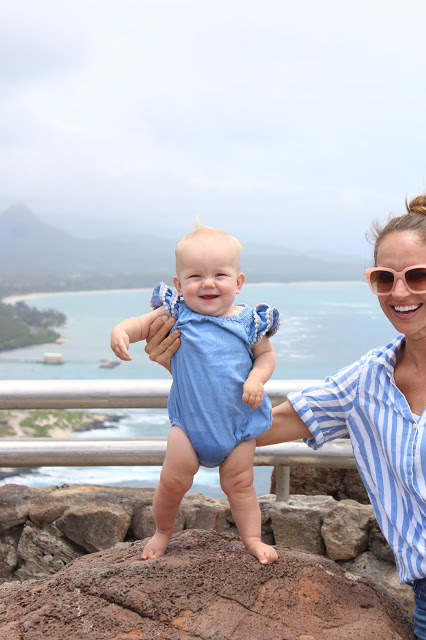 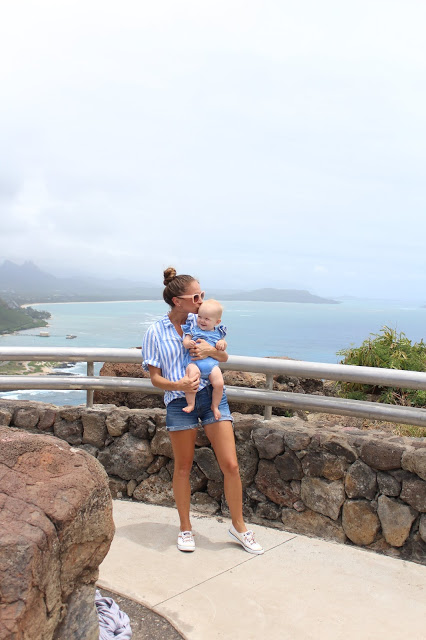 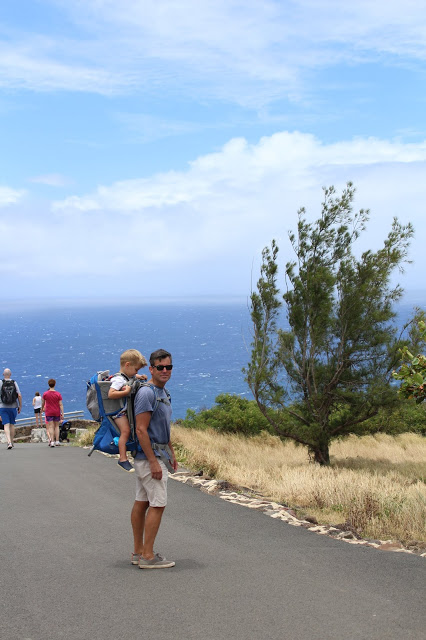 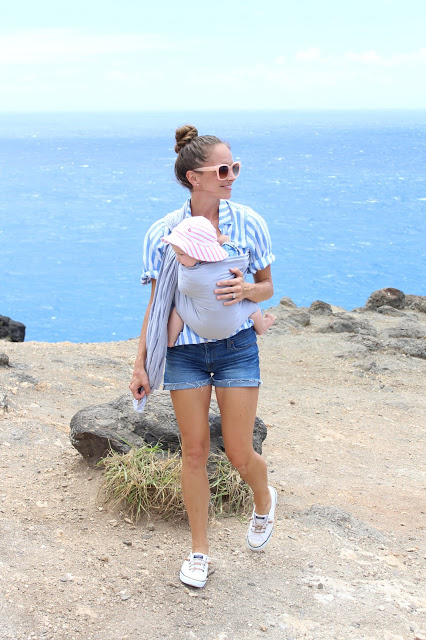 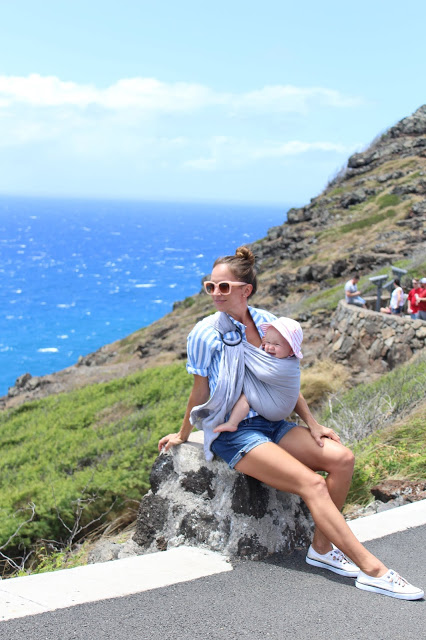 outfit details:
denim shorts (my all time-favorite pair) | striped shirt (I have the pink version as well and am wearing a Tall Small) | nursing tank | blush sunglasses (under $20!) | white sneakers (I can’t recommend these enough, they’re so comfy and work with jeans, shorts and dresses.  Size up half a size.) | Caroline’s romper
On Monday we went on a family hike that Tom and I have not done since 2012- Makapu’u Point Lighthouse Trail.  (Tom worked all weekend so it was the weekend for him.)  It was a different experience hauling a toddler and a baby this time, but we really enjoyed it and also got a good workout in.  Even though we had done this hike before we still couldn’t get over the breathtaking views.  The ocean almost seems to surround you and there are countless shades of blue in every direction.  The great thing about the Makapu’u Point Lighthouse Trail is that the entire thing is paved and the path is really wide.  We saw a lot of families with strollers but we decided to carry the kids instead.  We had hoped that Jack would walk a good bit of it, but he didn’t like being told to not go near the edge, and then he kept getting distracted by his shadow and tripping, and then he sat down randomly, so….I’m glad we had our Osprey carrier for him.  I wore Caroline in my Wildbird ring sling and it worked well because it wasn’t a very strenuous hike.  It’s more of a walk than a hike, since it is paved, but it’s all up hill so it is a bit tiring.  If you have young kids I’d definitely recommend this one, espeically if you don’t want to venture into the woods.  The only issue is that parking is limited and there are no restrooms.  Other than that it’s great!  There isn’t much shade either so sunscreen is essential, and also pack a good bit of water because I don’t think I saw a water fountain there.  The drive to get there is spectacular too (you pass Koko Head (a spectacular hike that you don’t want to do with kids), Hanauma Bay, a blow hole, the “From Here to Eternity Beach,” and some spectacular cliffs and crashing waves).
Both kids fell asleep as soon as we got in the car after the hike, so we decided to drive to China Walls, which is this amazing spot on the opposite side of the Hanauma Bay crater and there are lava ledges that you can jump off of if the waves are cooperative.  I did it back in 2012 and it was amazing!  When we stopped by this time the waves were massive and there were lots of surfers out in the water.
After we we both took a turn looking at China Walls we headed to Kona Brewing Company in Hawaii Kai.  It’s kind of a tradition of mine to go there after hiking Koko Head, so we decided it would be perfect after this hike too.  We shared some great (huge) kalua pork nachos, I had a burger, Tom had fish tacos and we also enjoyed a couple beers.  It was a great day!
I wore one of my go-to outfits when I know we will be walking a lot but I still want to look cute.  I bought these white sneakers back when I was very pregnant with Caroline and still love them.  The insole is pretty cushioned so they are really comfortable, but they also look cute with any outfit.  I can’t recommend them enough.  I also wore the denim shorts I wear pretty much every day now.  They’re stretchy but don’t get baggy, and they don’t have much distressing which is nice.  I bought the pink version of my shirt about 2 months ago and loved it so much that I just bought the blue version.  I like that it’s easy to nurse in because of the buttons, and I like that it’s short sleeved.  I thought the regular length seemed a little short so I went with the tall length and it’s perfect.  My pink sunglasses are a fun pair that are almost always on sale for $17.50, so even though they’re a bit trendier than my normal style I didn’t mind the price. 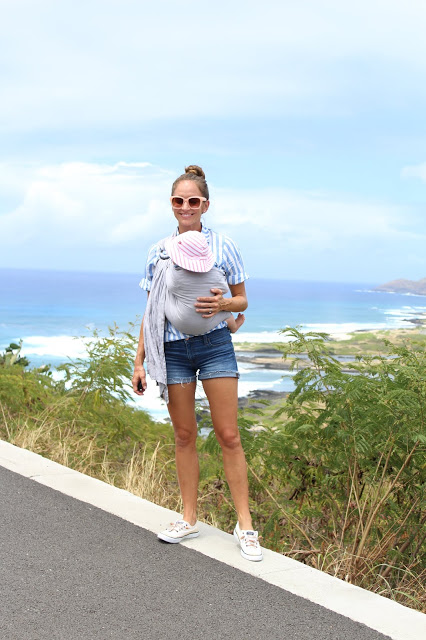 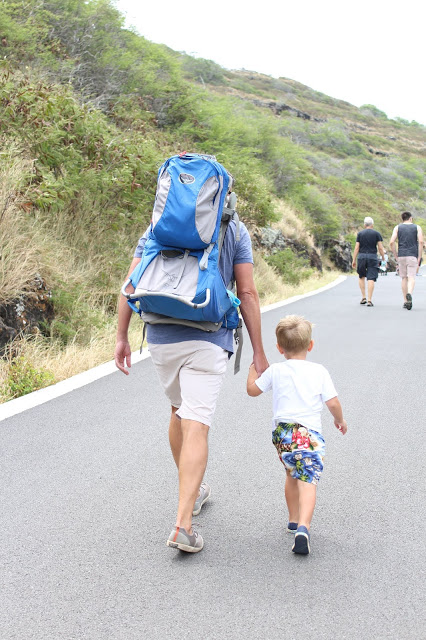 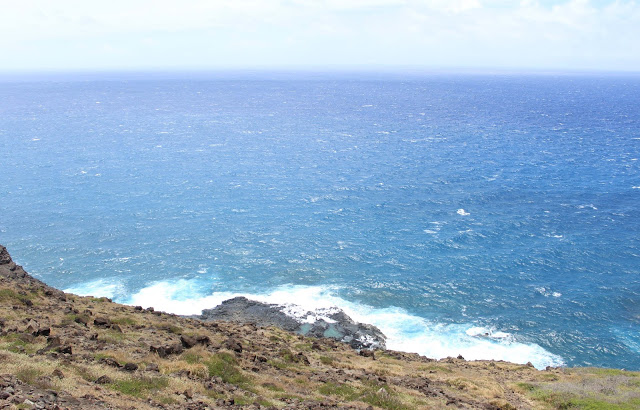 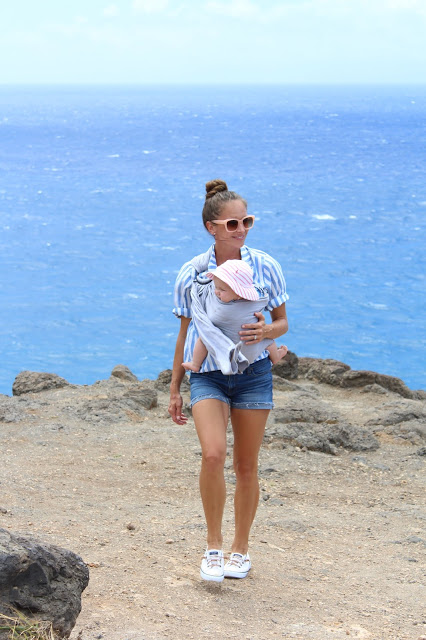 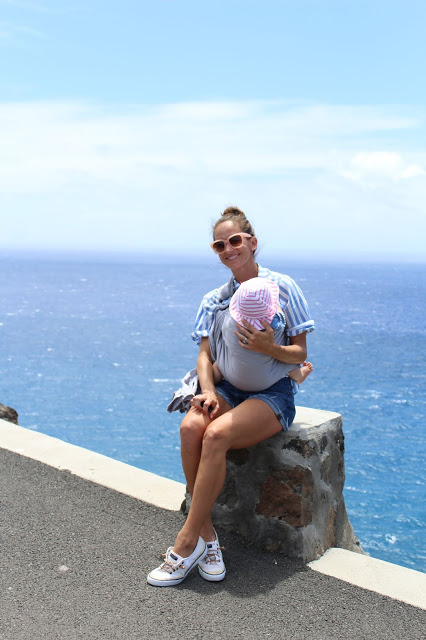 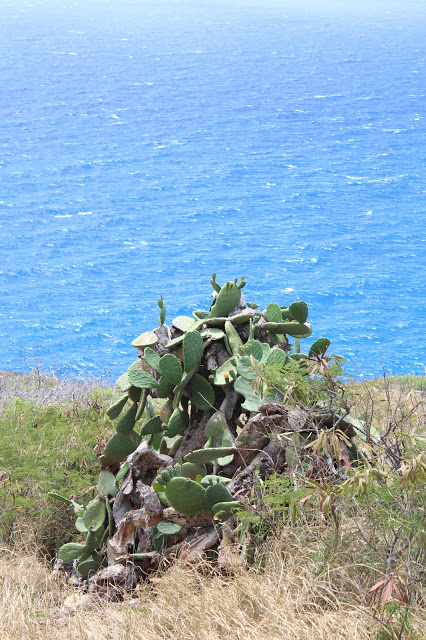 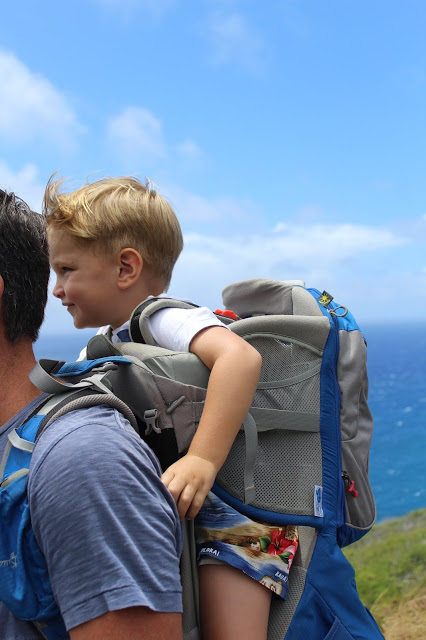 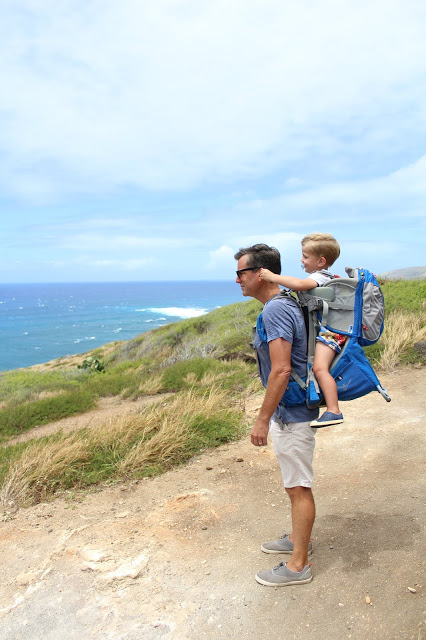 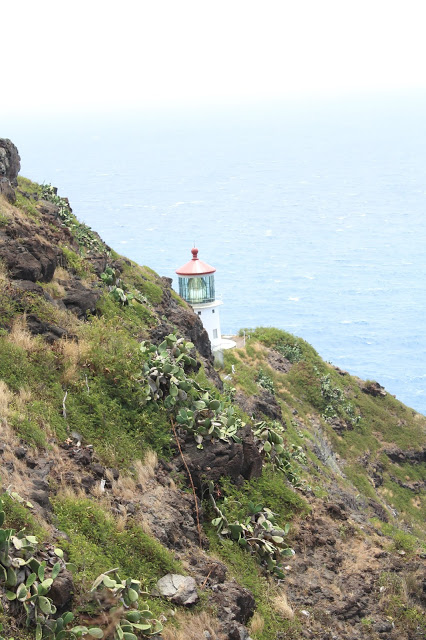 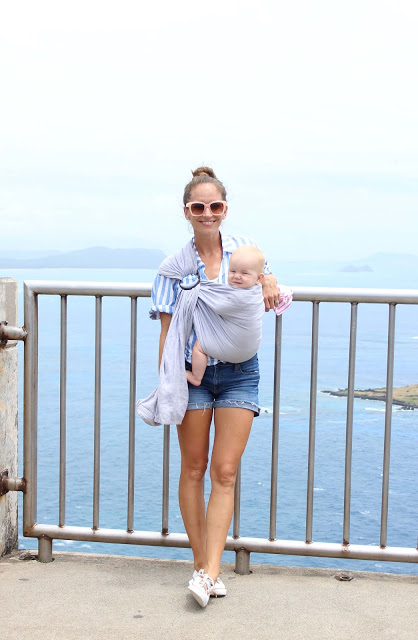 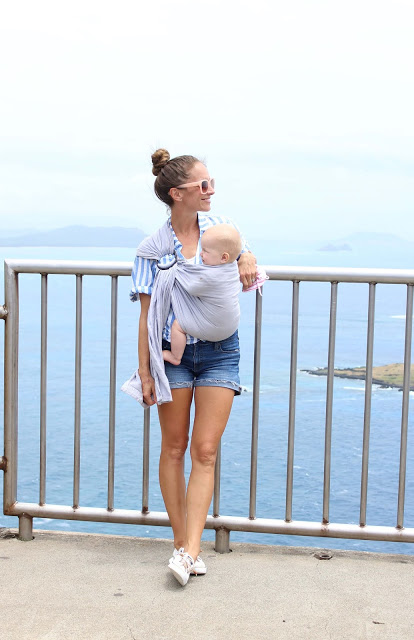 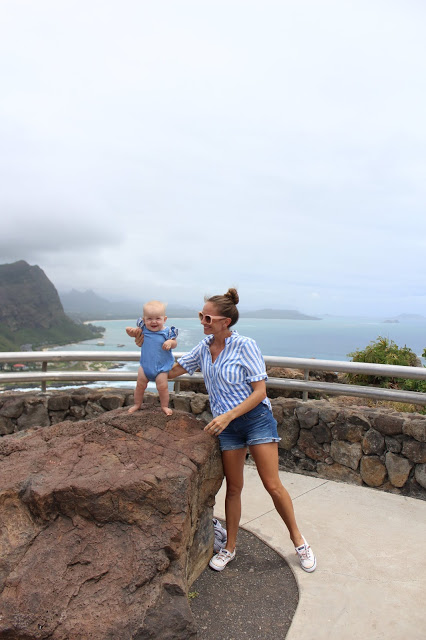 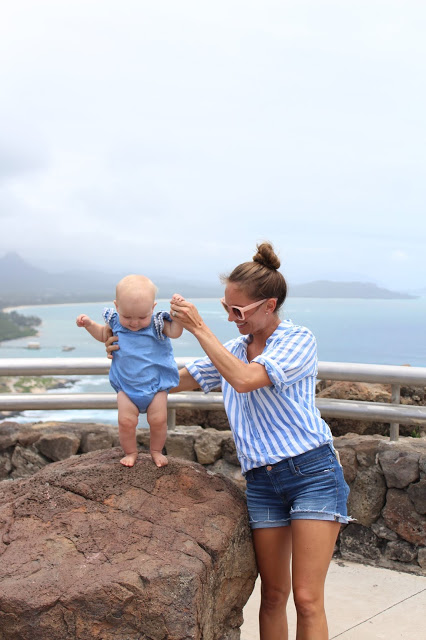 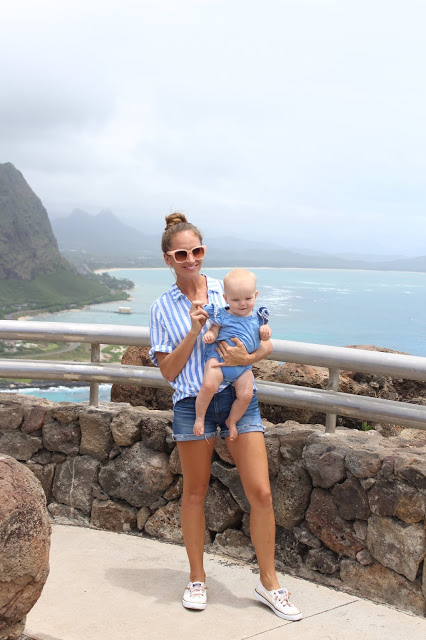 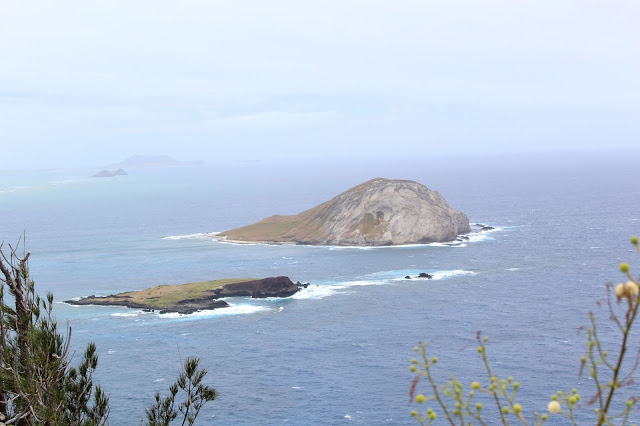 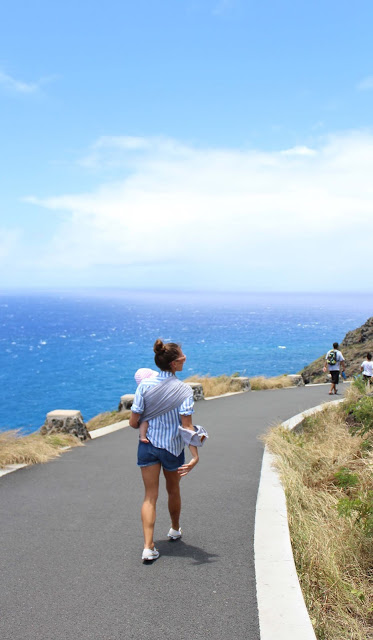 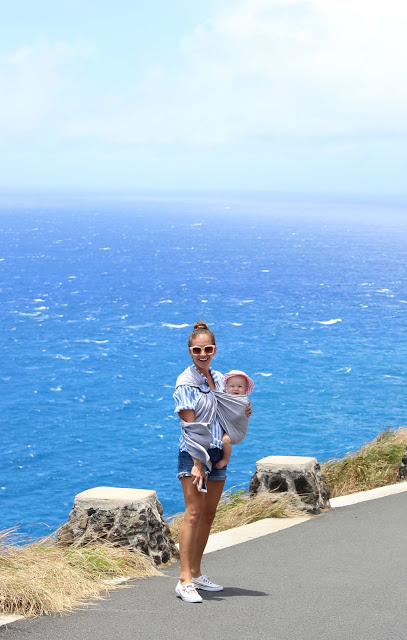