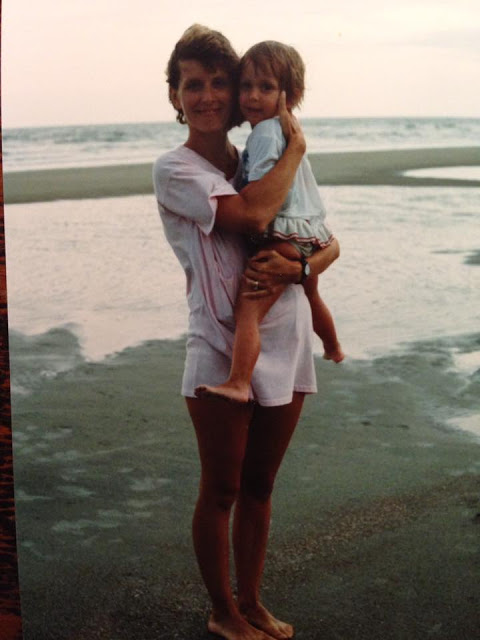 I recently received a message on Instagram from a young mother who desperately wants to set a good example of health for her daughters, but she isn’t quite sure where to start.  I’ve mentioned my mom many times on the blog and on social media, and this reader asked if I could share some ways that my mom set a healthy example and instilled a love of physical activity, healthy eating, and a well-balanced lifestyle.  Before I get started though, I wanted to share a 4-year old blog post that many of you may not have seen if you haven’t been following me for that long.  My relationship with my body has not always been stable, and I struggled with disordered eating from high school through college.  I talked all about my health and fitness journey here, although I’d say that now that I’m a mom and have matured a lot my relationship with my body and food is better than it’s ever been.  I will confess one thing though, when I was in high school and my relationship with food was extremely volatile, one of the things that I had trouble coming to grips with was the fact that I knew my mom had a good relationship with food and I couldn’t seem to find that balance.  I thought to myself, “why does she have it all figured out and I don’t?”  In reality, she had actually struggled with her own body image and eating issues up until she and my dad started thinking about conceiving me.  Once she realized her body was going to be the vessel for a tiny little life she started running and started using food as fuel, rather than treating it as the enemy.  The rest is history and she’s had a healthy relationship ever since. 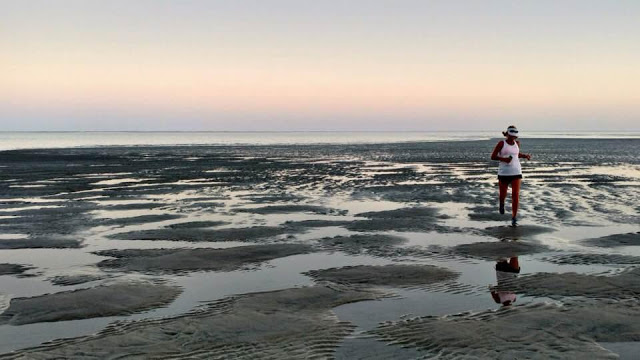 Ok now, in honor of Mother’s Day a few days ago, here are some of the things that my mom did to set a healthy example when I was a child.  I think of my mom’s good example on a daily basis now that I’m a mom, and I hope that I can follow her lead and set a healthy example for my children as well.  All moms have their own strengths and challenges so please don’t take this as me saying that you must do all of these things to be a good mom.  Not the case at all!  These are simply things that my mom did/does that I am trying to do as well: 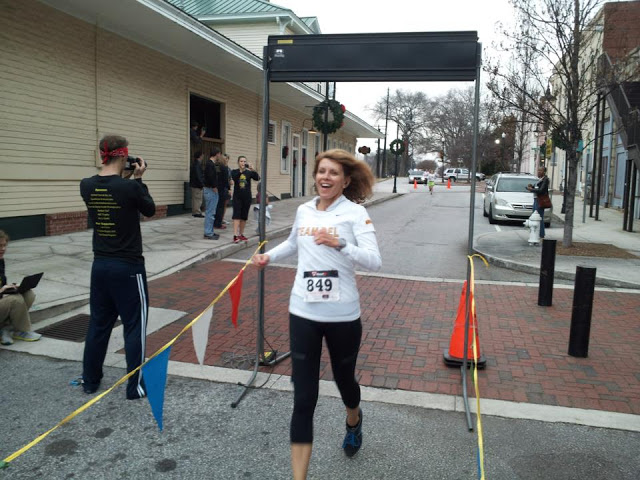 Play.
My mom was never the one to sit on the sidelines and just watch us.  (Although who doesn’t like lounging around from time to time because being a mom is exhausting!)  She would often play tag with us, play capture the flag, race us, jump rope with us, and jump on the trampoline with us.  There is certainly value to children learning to play by themselves without adult interaction (and she made sure to allow us this a lot of the time), but we always enjoyed it when she would get involved.  At the pool she was always quick to join an intense game of sharks and minnows and wasn’t afraid to jump off the diving board.  Heck, even last year, at 58 years old, I watched her do a blow up water obstacle course surrounded by a bunch of kids and teenagers.  It was the funniest thing in the world and she laughed at herself even when she’d fall off the float and end up the water.  She was always game to get involved in something fun, and that made us want to join in too.  I think that it’s pretty prevalent in most families for the dad to be “the fun one” who wrestles and plays with the kids, but that kind of physical interaction can definitely be part of a mom’s role too. 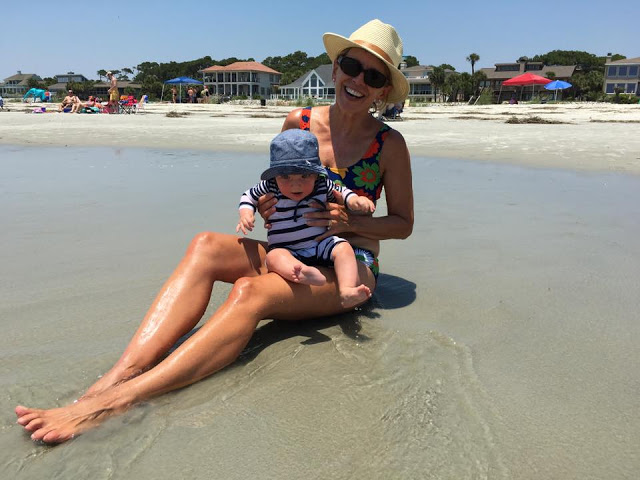 Live an Active Lifestyle.
My mom doesn’t have a sedentary bone in her body, and has always loved hiking, walking, running, dancing, playing tennis, swimming, and trying her hand at obstacle courses.  She’s “a stander,” as she calls it, and can often be found standing rather than sitting.  She’s also known for being the star of the dance floor, as seen below at my cousin’s wedding.  Fitness is more than just about staying in shape, it is truly a way of life. 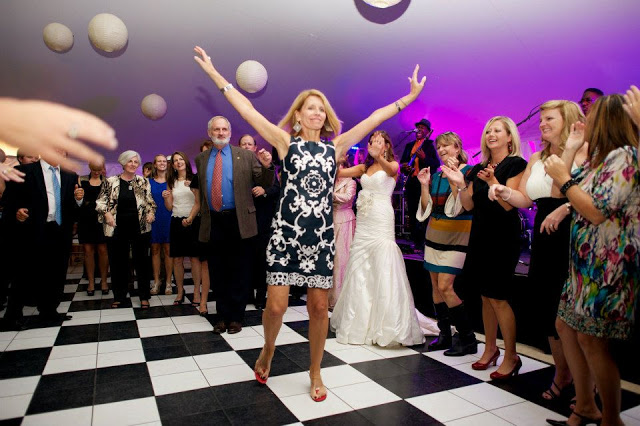 Seek Out Ways to Sneak in a Workout.
One vivid memory I have that always sticks out in my head is that whenever we’d go to the pool she would tread water for a while.  She would do different movements to create resistance for her arms and legs and would get that little bit of exercise in while staying in one place.  It would be easier to just stand in the shallow end or sit on the side of the pool, but she never missed an opportunity to push herself a little bit.
Food as Fuel.
She never used food as a reward and never considered herself “bad” for splurging on something she wanted.  Attaching those emotions to food is a surefire way to end up with an unhealthy relationship with food.  Even if she would indulge a good bit she wouldn’t deprive herself later, she’d just make healthier choices the next few days and wouldn’t stress about it.  Her catch phrase has always been “everything in moderation.”  That goes for everything from food to exercise to alcohol.  When you take anything to the extreme (even positive things like exercise or healthy eating) it’s easy for you to become unbalanced and overly fanatical about tracking calories or logging minutes of exercise.
Exercise During Your Kids’ Extra-curricular Activities.
When my brother and I were heavily involved in traveling soccer teams my mom initially would take turns carpooling with some other parents.  After a while she realized she’d start drinking wine at home when she could have been using her evening in a more productive way.  She realized she needed to change her priorities, so she started taking us to soccer practice and would run laps in the grass around the soccer complex.  My teammates and I would notice her looping around and around and they would say, “wow, your mom can run!”  It was always a point of pride for me to know that my mom could do that, especially when most parents sat in folding chairs on the sidelines for the entire 90 minute practice.  Even if you’re not a runner you can sneak in some exercise, like squats and lunges or things like that.
Maintain a Steady Body Weight.
This is easier said than done, but by maintaining a steady body weight and not “yoyo-ing” my mom modeled what a healthy relationship with food looked like.  She never tried any fad diets, she just ate healthy amounts of healthy foods and smaller amounts of the things that were more calorie-dense.  She didn’t have splurge or cheat days, she just remained steady, ate her dark chocolate every night, had her glass of medicinal red wine, and strove to listen to her body and pay attention to how her clothes fit on her.
Positive Self-Talk.
I never once heard my mom say that she wanted to change something about her body.  She never strove to be perfect.  She was always kind to herself and was thankful for what her body could do.  If she ever thought something was larger or softer than she wanted it to be I never knew that to be the case.  In my mind she was a strong and confident and never hated on her body or picked apart her flaws.  Now that I have a daughter I want to be especially diligent about celebrating what my body can do rather than being unhappy with silly things like stretch marks, cellulite or my more-prominent-than-average nose 🙂 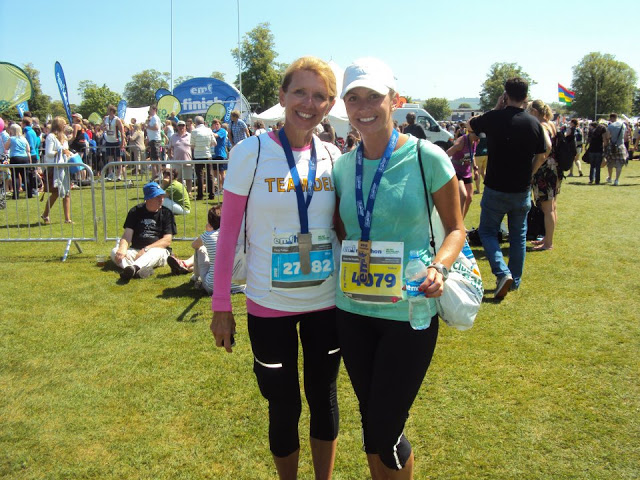 Create Fitness-Related Family Traditions.
My family had fitness-related traditions that we always looked forward to.  On the 4th of July (once my brother and I turned 10) we would always run the Atlanta Peachtree Road Race 10K.  I would run with my mom and my brother would run with my dad and we always had such a fun time even if it was challenging.  Plus it’s fun looking back on the photos from all of those races now that we’re older.  Once we were in high school and college we started doing an Atlanta Thanksgiving Day half marathon too.  You don’t have to bite off a long distance race to create this sort of tradition with your family, even a 5K is lots of fun to do as a family.  Training for these races can be a great family activity too.  Another thing we would do as a family when we were traveling was go on a family run to explore our surroundings.  We’ve run in England, Tuscany, Germany, Hawaii, DC, Portland and countless other places.  Not fast, and we’d often get turned around because we weren’t sure where we were going, but it was a wonderful way to learn about a new location.  One time my mom and I even signed up for a half marathon on vacation (in Hawaii in 2005, as a matter of fact) that we found out about the day before.  Neither of us were completely prepared to run a half marathon, but it was nice that we both had a foundation of fitness that allowed us to share such a unique experience together. 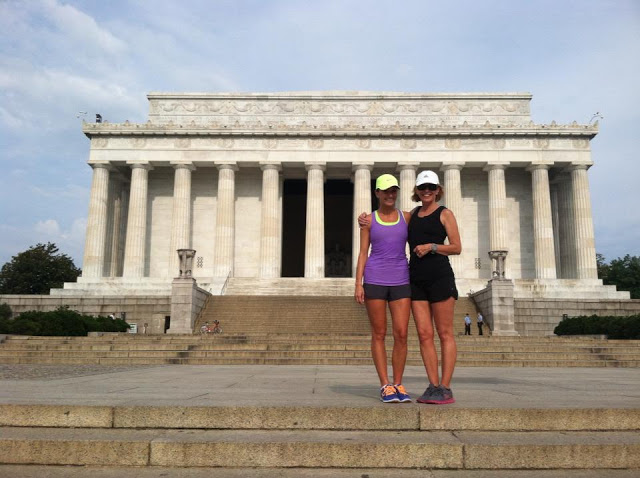 There are countless ways to be a healthy example to your children, so find what works for you and stick with it!