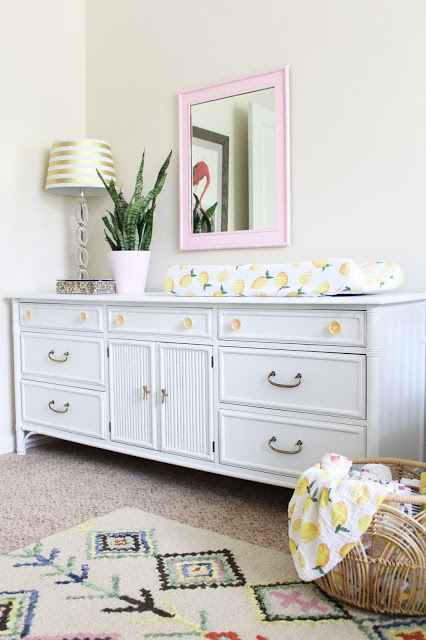 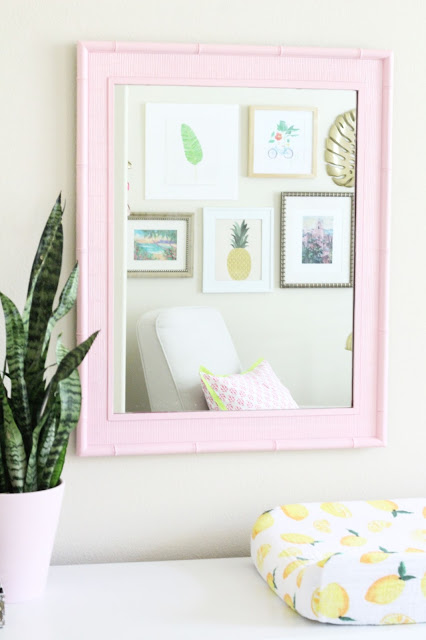 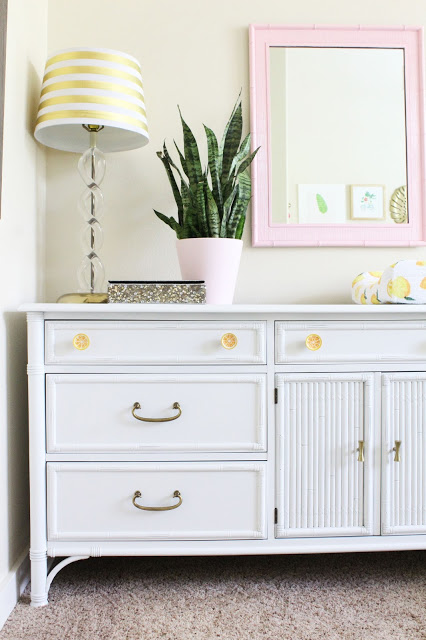 nursery sources:
dresser (vintage) | mirror (vintage) | lamp (vintage) | lamp shade (similar) | plant pot | rug | changing pad cover | basket (similar) | lemon crib sheet in basket | lemon drawer knobs (similar) | dresser door knobs
As seems to be the norm, it took nearly 2 years for me to finally tackle the makeovers of this vintage Drexel faux bamboo credenza and vintage faux bamboo mirror.  Better late than never though, right?  I found them on on separate trips to the Habitat for Humanity ReStore back when we lived in Columbia, MD and I’m so glad they have finally got a facelift!  Just in time to be used in our baby girl’s nursery too. They’re not an actual set, but as soon as I found out we were having a girl I knew they would work perfectly as her dresser/changing table area.  Here are a few before photos: 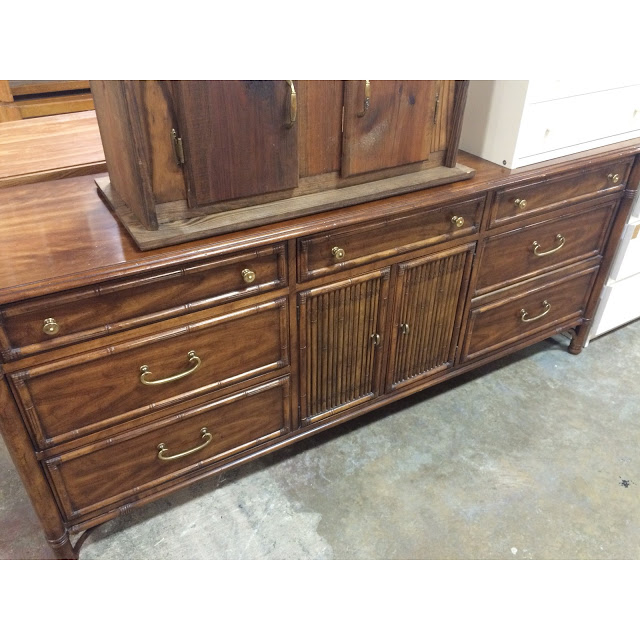 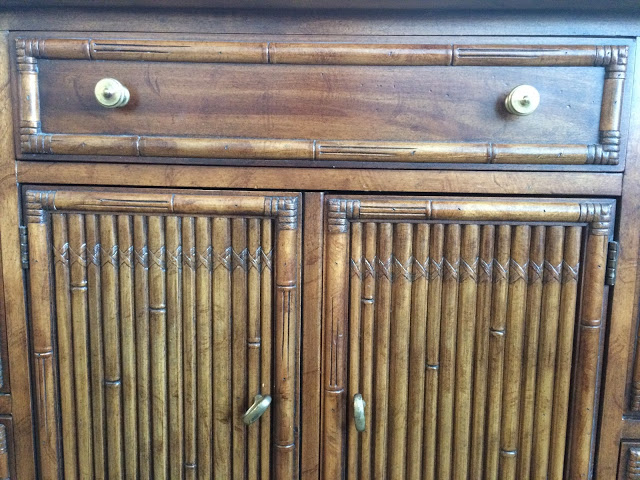 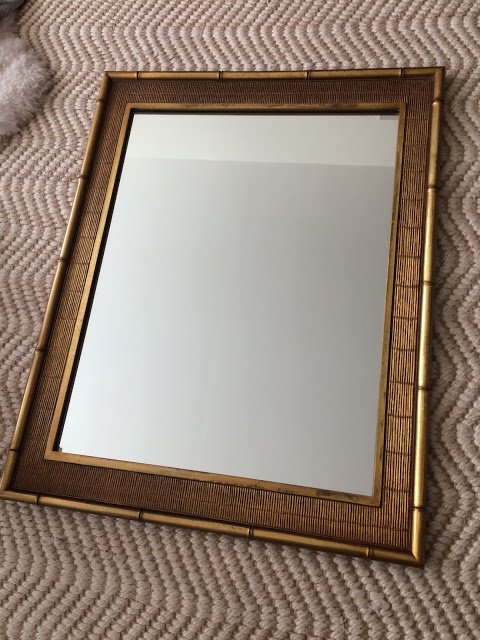 As you can see, the dresser had great bones but was a yucky brown, and the color of the mirror was a muted gold that didn’t help it out much either.  I got the dresser for $76 (someone did not know what they were getting rid of because here is the same one for sale on Etsy for $1,095) and I paid $5 for the mirror.  For the mirror, all I did was scrub it with a brush and some water to remove any dust, and then I covered the mirrored portion with some painter’s tape and newspaper.  Next, I spray painted it with 2 coats of Rust-Oleum Gloss Candy Pink spray paint.  Once it was dry (ok actually about 3 months later once we moved to Hawaii) I used a razor blade to scrape off any paint that got on the mirror. 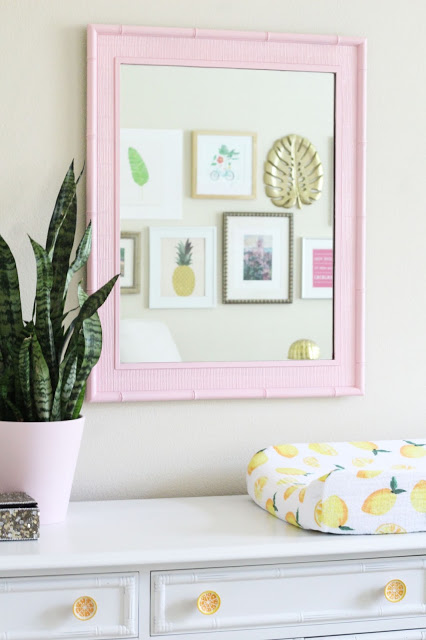 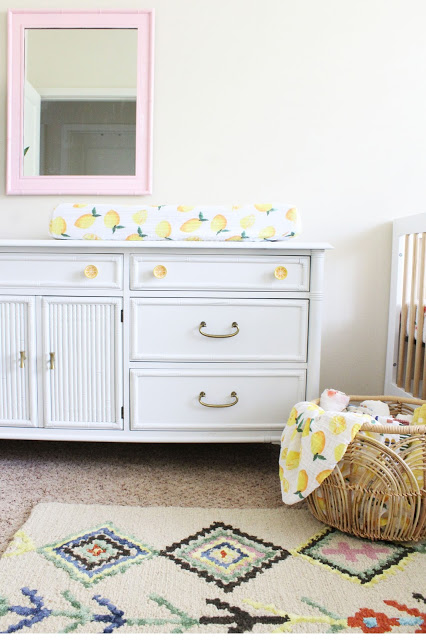 The dresser makeover obviously took a lot more work.  It’s a heavy monster of a piece, so moving it was a bit of an ordeal, so I made sure to finish the body all in one day.  I used my tried and true furniture makeover steps of sanding, cleaning, painting and top coat (you can see the details/steps here for another piece I fixed up) and used the same ole Rust-Oleum Gloss White spray paint that I’ve used on pretty much everything in our house because it’s simple to use and the color is really nice.  I made sure to remove those front doors though (as well as the drawers, of course) so that I could get all the little crevices.  For some reason the paint on a few of the drawers bubbled up once I applied the clear top coat (a problem I’ve never run into before…I think it may have been because of the heat).  I decided to let it dry completely and then I used some very fine sandpaper and sanded down the bubbled areas.  Then I touched up the paint in those spots and it pretty much solved the problem.  You can still see where some of the bubbles were if you look really closely, but I don’t even notice it because the sanding really did the trick.  (Note: If a bug lands on your wet furniture just do the same exact thing…resist the urge to wipe it off because that will just make it all worse.  Let the paint dry with the bug on it and then just wipe or sand it off.)  Here is what the paint bubbles looked like before I fixed the problem: 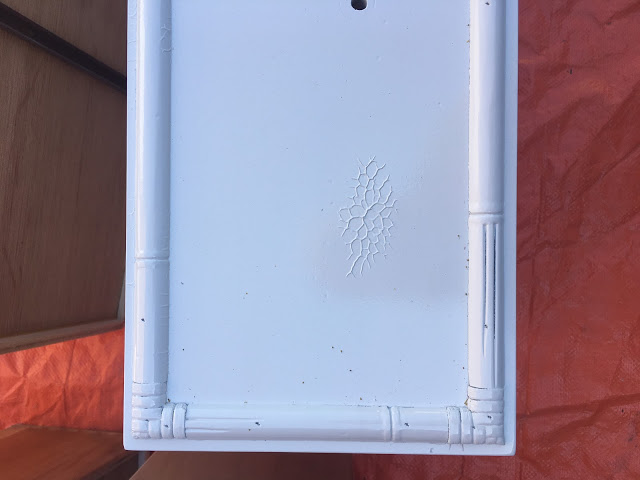 Once the dresser was completely dry I put the drawers back in and reattached the doors.  I wait a while to close them though because I didn’t want them to stick.  Our movers packed up the house shortly after I finished painting it, so I held off on reattaching most of the knobs because I didn’t want to damage my new ones.  I decided to use lemon knobs from Anthropologie on the top drawers (unfortunately they are no longer available, but these are similar but not quite as cute) and these knobs (in bronze) for the doors.  I wanted to replace the larger drawer pulls too but the width of the hardware is funky and I couldn’t find anything that would fit.  I decided to just leave them and I think that because I updated all of the other knobs they don’t look quite so dated anymore.
I say it every time, but I’m so happy with how these makeovers turned out!  Redoing a piece of furniture is certainly a labor of love, but it saves SO much money compared to if we bought these pieces brand new or already fixed up, and the memory of what they looked like beforehand brings such satisfaction.  Now we just need our baby girl to get here! 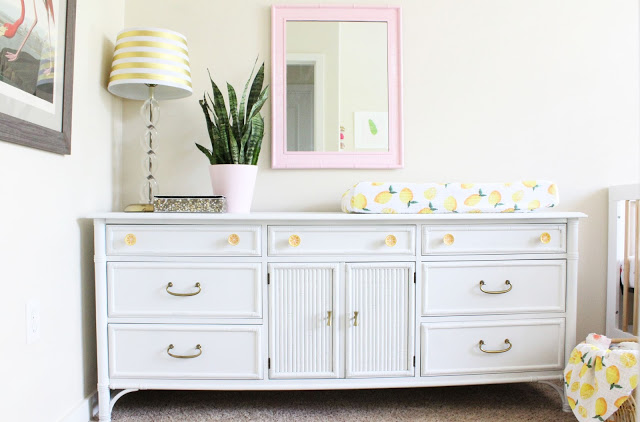 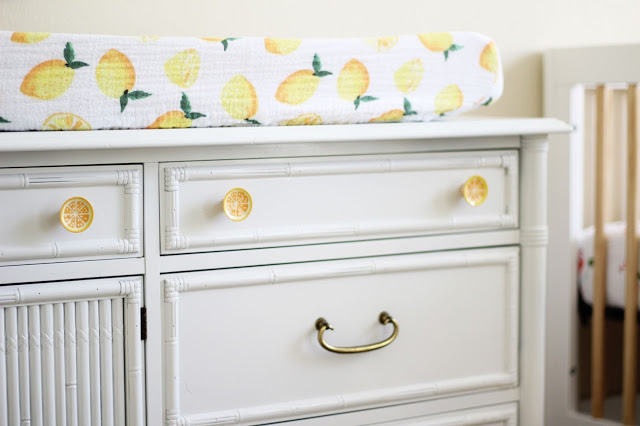 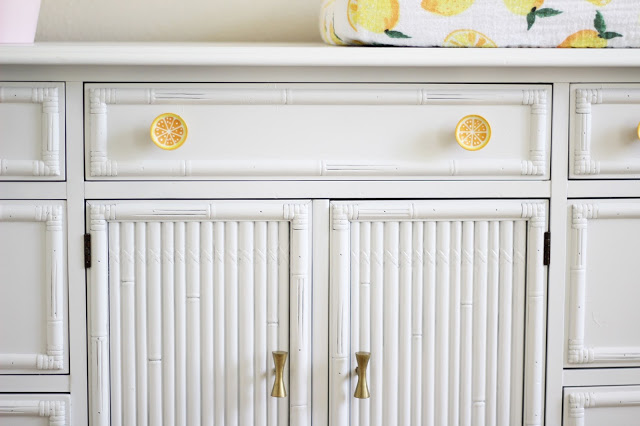 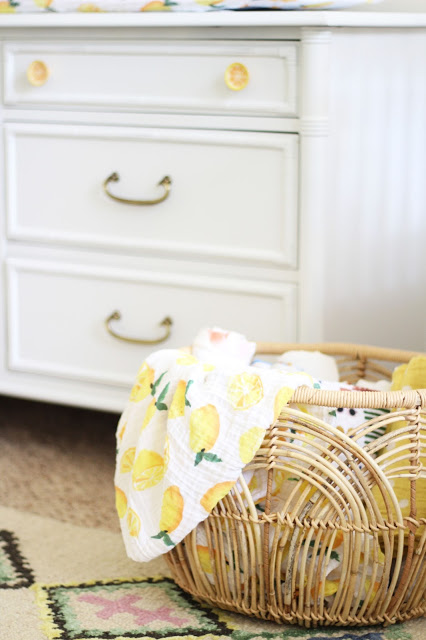 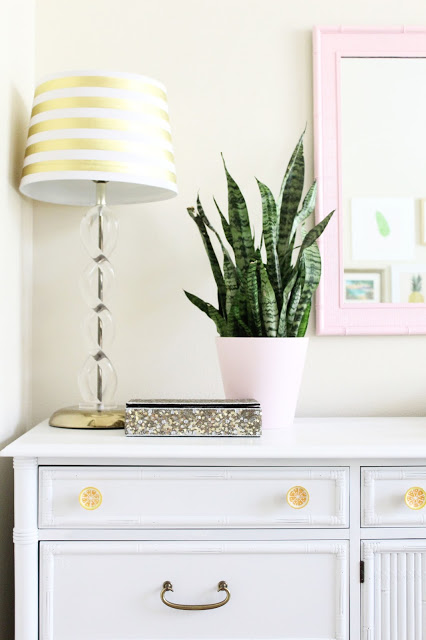 Stay tuned for another nursery DIY and the full nursery reveal!