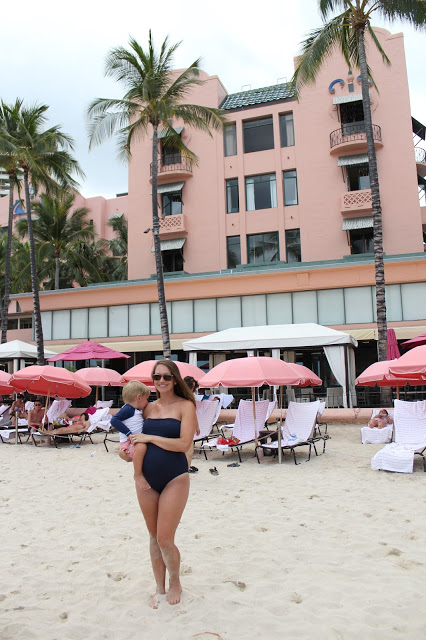 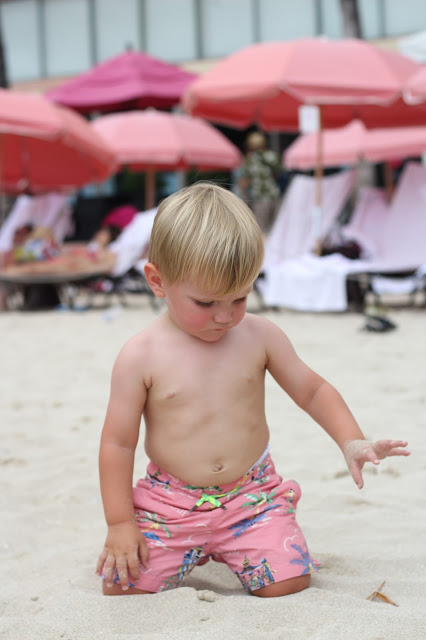 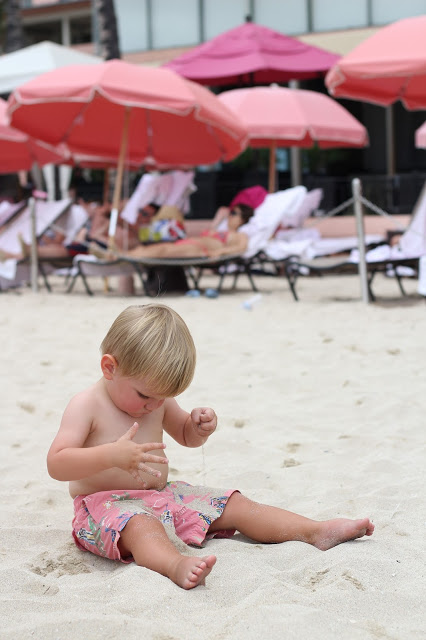 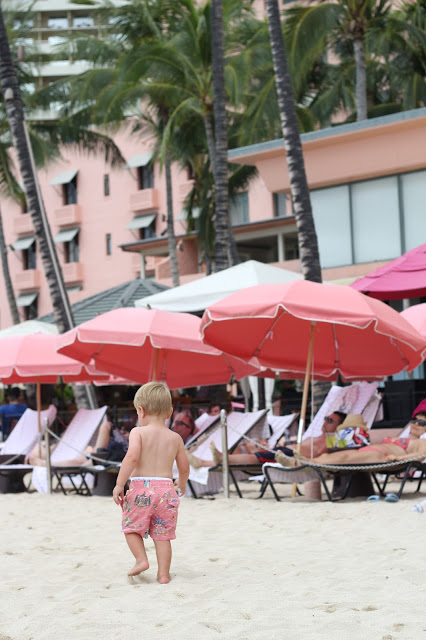 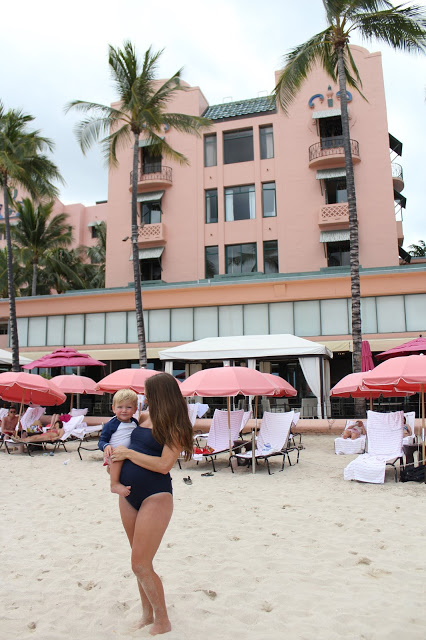 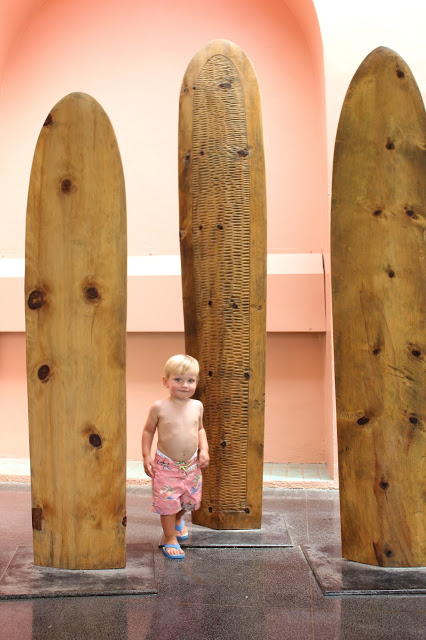 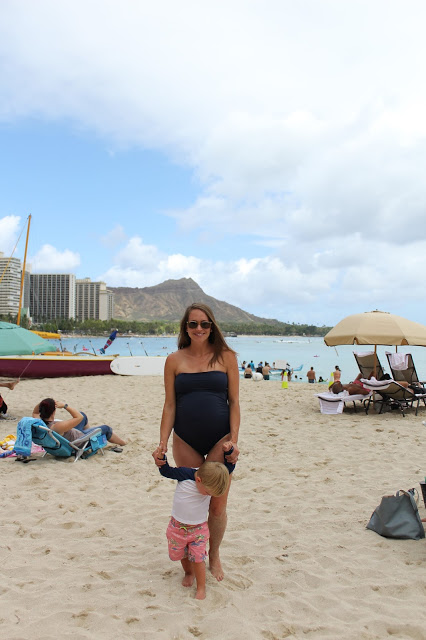 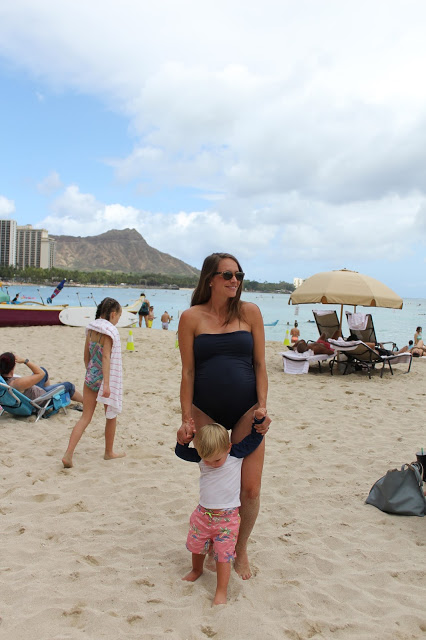 photos in front of the Royal Hawaiian (the most beautiful hotel ever)
swimsuit (it’s non-maternity and it comes in a lemon pattern too) | sunglasses (old but these are the same style and the tortoise shell is really pretty) | Jack’s swimsuit (sold out but here and here are some cute options too) | rash guard (similar)
Aloha everyone!  I’m writing this from our hotel room in Waikiki while Jack naps in the stroller and Tom returns a rental car.  Jack fell asleep on the way back to the hotel after playing at the beach for an hour and a half and I’m afraid to try to move him.  Bending over a pack and play is tough when you’re 31 weeks pregnant and I know I’d wake him up if I tried!
We have officially been here a week and have crammed a lot in already.  We viewed 2 different homes the day after we got here and are thankful we were able to get the second one we saw.  It’s on a different side of the island than I lived last time (and pretty far from the hustle and bustle I love about Honolulu and Waikiki) but I think it will be a perfect fit for our growing family.  It has 3 bedrooms, 2 bathrooms and is all on one floor, which is a huge help with wild-man Jack and a baby on the way.  There is a beautiful pool in our neighborhood and we can see the ocean from our living room and lanai.  I keep pinching myself over how perfect it is for us.  There is also a community beach and sports club that offers lots of fitness classes (including a Mommy and Me one I fully intend on taking advantage of).  It’s half the size of our 115 year old home in Kansas, but the layout and functionality makes a lot more sense so I know it will work well. 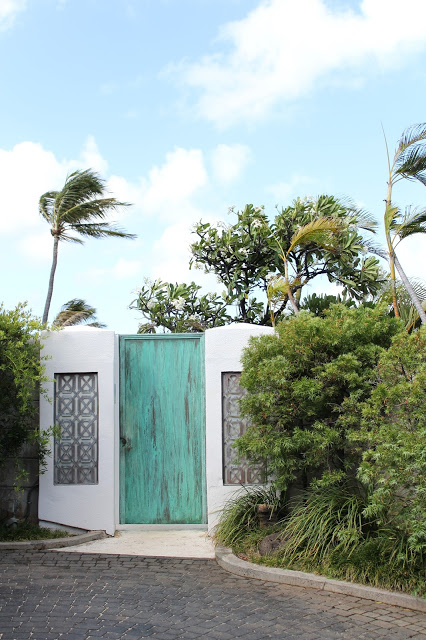 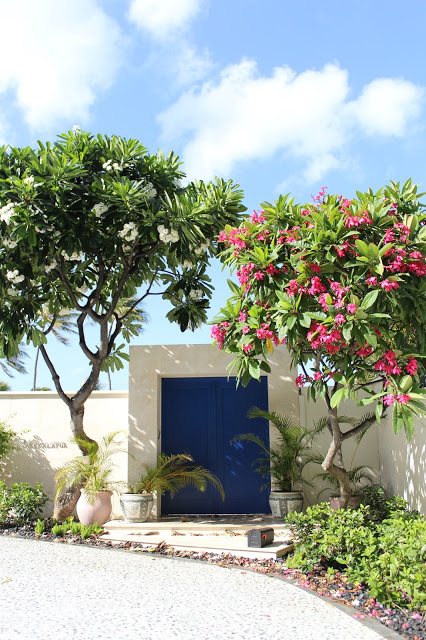 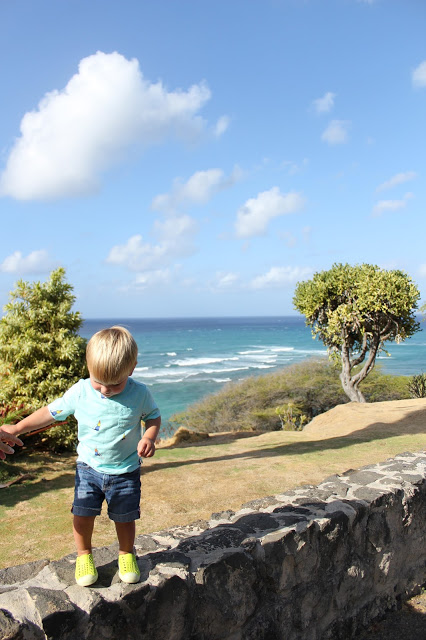 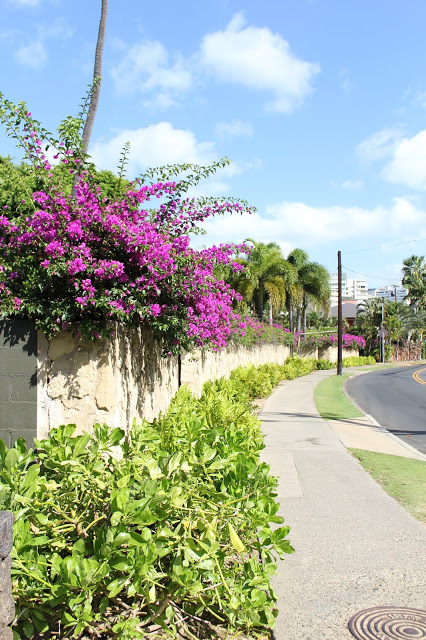 pretty scenes along Diamond Head Road
Jack’s shoes (we are obsessed with this chartreuse pair and they glow in the dark) | shorts | v-neck tee (similar)
The flight here was a long one…just under 10 hours with no layover, and we had 3 seats in the middle of the airplane.  We have always flown “infant in arms” with Jack but because the government paid for our plane tickets he had his own assigned seat and we decided to install the carseat for him to sit in.  THIS MADE ALL THE DIFFERENCE!  I had read that toddlers do better when they have their carseat because they understand that when they are buckled in they have to sit and can’t get down.  I have to say, this was definitely the case with Jack.  All of Jack’s flights after he turned 9 months old have been really hard because he wanted to get down to crawl or walk, but having his carseat made him less restless and more agreeable.  He only slept about 90 minutes and we still had to do laps around the airplane and entertain him with toys, snacks, Moana and Daniel Tiger, but it made the flight much more bearable for all of us.  Not gonna lie though, I’m dreading flying back to the East Coast next summer. 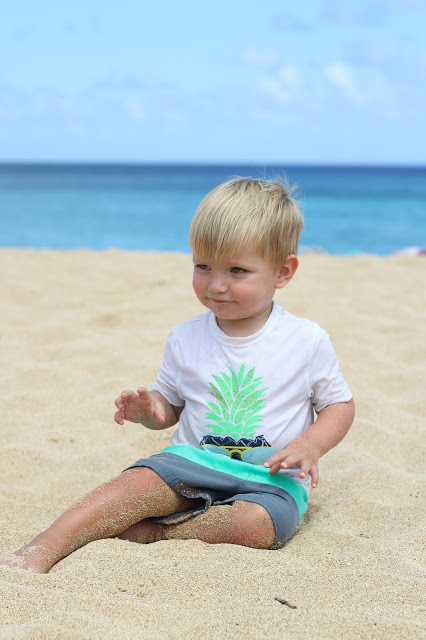 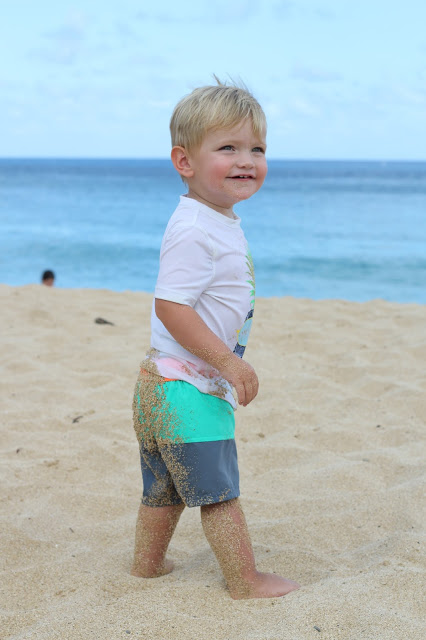 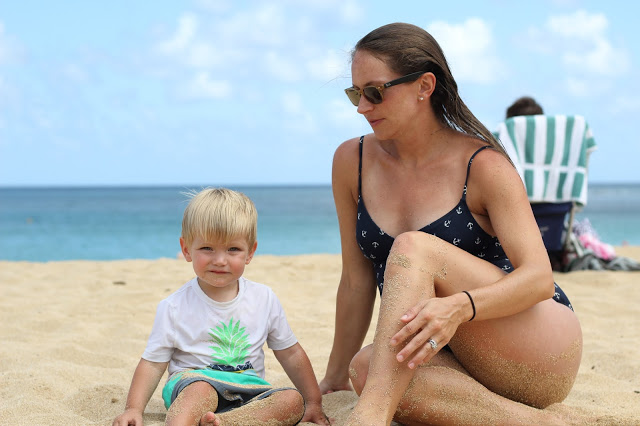 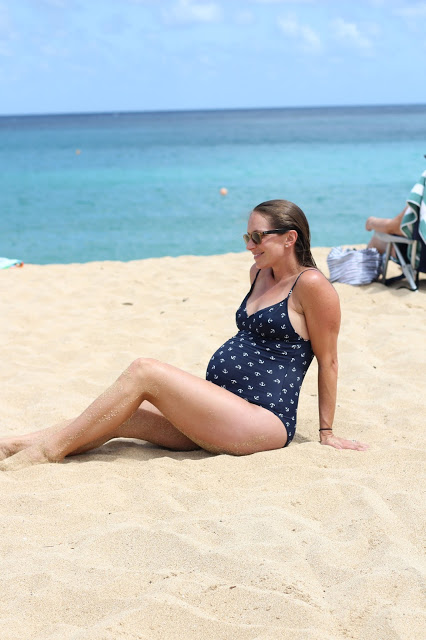 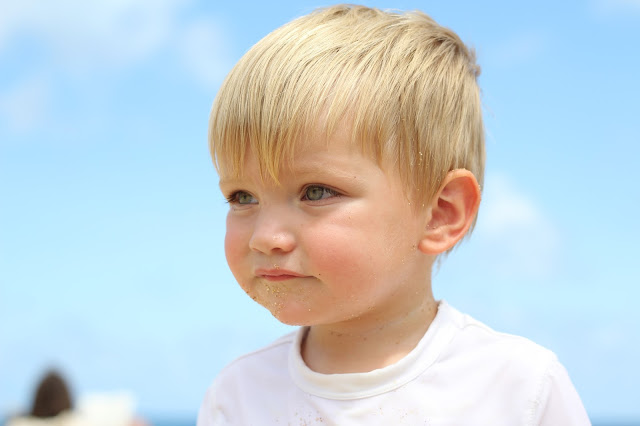 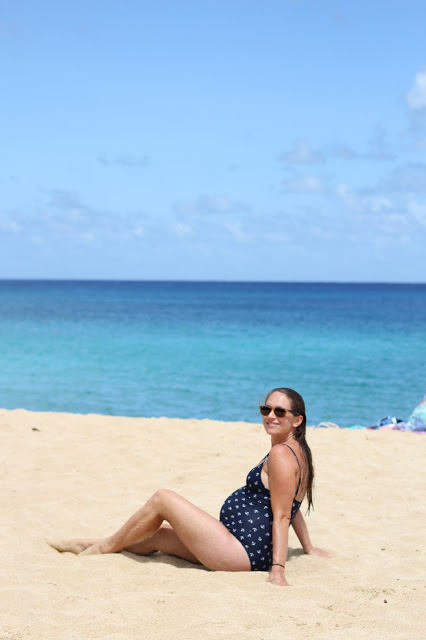 pics from our day at Waimea Bay on the North Shore
my swimsuit (non-maternity and old but this watermelon print one is the same style) | Jack’s swim trunks
Getting Jack used to the 6 hour time difference was a bit rough at first, but I think he’s done a great job of adjusting without really understanding what is going on.  We landed at 2 something in the afternoon and just kind of kept moving until it was late enough for us to attempt going to bed (around 6:30 PM).  He woke up twice the first night and decided it was time to start the day at 4 AM, but by night 2 he was sleeping through the night and slept about 15 minutes longer in the morning.  After a week he finally slept until 6:20 AM and I think we are all finally adjusted.
We are still playing the waiting game for our household goods and our cars, so we will be living in a hotel until they arrive and can be delivered.  While juggling naps and early bedtime in a hotel room is tricky with a toddler, we are really enjoying being down in Waikiki.  Lots has changed since we left the island in 2012, and the new International Market Place is pretty impressive.  We’ve had lots of meals at The Street: a Michael Mina Social House, which is essentially a really cool and delicious food court.  There are all sorts of different “restaurants” inside the restaurant (ramen, Mediterranean, poke bowls, salads, pizza, BBQ, shave ice, burgers, coffee and a few different bars) so the options are endless and the food is amazing.  The best part is that they have a 50% off military discount, so we have definitely been taking advantage of that.  Not sure if it’s a limited time thing since they just opened a month ago, but it’s really nice that they’re offering it, even if it’s just temporary.
Jack is such a water baby and he just wants to go straight out into the ocean every time he sees it.  We bought him this float yesterday and it’s incredible.  I picked it up at Target for about $16 and he loves the mobility he now has.  He’s like a little duck and kicks his feet really fast so he can propel himself around.  We plan on getting him into swim lessons once we’re settled, but for now I’m working with him on using his hands and feet and getting used to putting his head under the water.
As far as baby girl goes, I’m 31 weeks pregnant now and she moves more than Jack did…and he moved A LOT.  She often keeps me up at night but all the movement is reassuring.  I’ve made my first OB appointment here in Hawaii and will be seen at 32 weeks.  It’ll be good to see the hospital where she will be born and to meet the midwives and doctors.
Lots going on here but it’s all good and we are so happy and thankful and blessed to be here, living our Hawaiian dream!