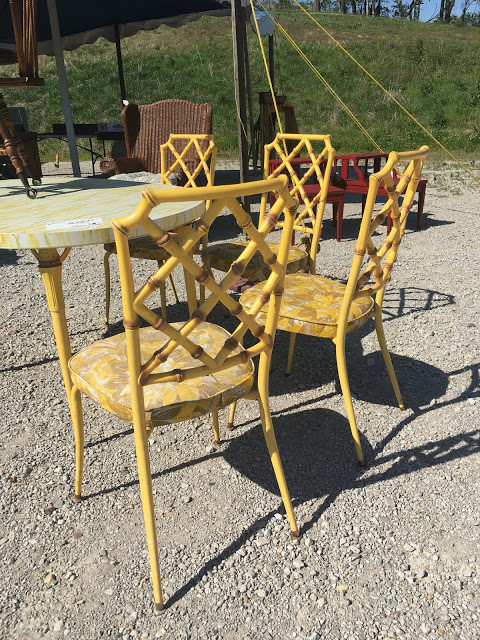 I haven’t done a “thrift store finds” post in a while because I’ve tried to cut back on accumulating stuff…but I found some amazing things recently that I just had to share with you!  Two weekends ago we decided to go on a little family outing around Fort Leavenworth.  We picked strawberries at Schwinn Produce Farm (as I mentioned in this post last week), we got locally made ice cream at the Creamery at Green Dirt Farm, and then on the way home we drove past The Farmer’s Daughter in Weston, MO.  We were not going to stop but I spotted what looked like some yellow faux bamboo chairs from the road, so I begged (told) my husband to turn around.  I jumped out of the car and sure enough, there were six faux bamboo chairs and a matching table, for $50 total!  Not that I need more chairs or an old dinette set, but the price was just too good to resist.  The photo above is how I found them at the store.
After a little research I found out that this set was made in 1972 by a company called Daystrom.  This is their advertisement, which cracks me up a bit because it’s super 70’s. 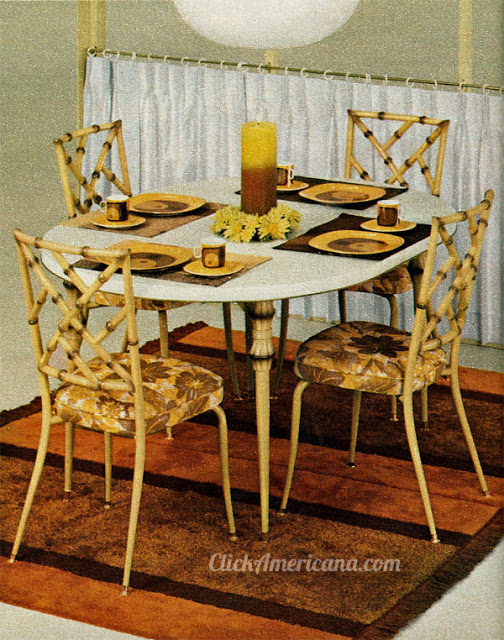 They obviously need some work, so my plan is to spruce them up with some bright yellow spray paint and reupholster the seats in this navy blue and white striped outdoor fabric.  I bought enough to also make a few pillows for our outdoor sofa and chairs.  I plan on painting the table white.  The top is formica so I’m not sure how well paint will work on it, but we’ll see.  I’d like to use this set outside once we move to Hawaii, so now we just have to find a house that has a nice lanai or yard 🙂  Stay tuned for the makeover.
I also found this really tall, really heavy Queen Anne mirror: 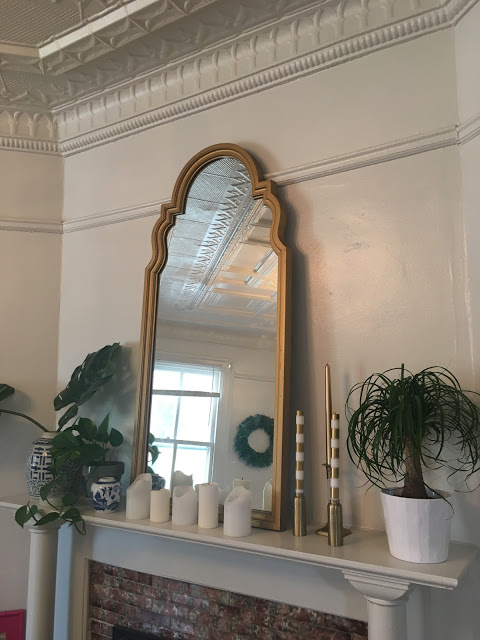 This is an iPhone photo and I think the mirror is too tall for this space, but you get the idea.  We needed it off the ground so Jack wouldn’t mess with it, so this is it’s home until it gets packed up in 2 weeks.  I think it would work well propped on a low dresser or hung in an entryway.  I don’t exactly have a plan for it at the moment but it was only $30, which was a steal.