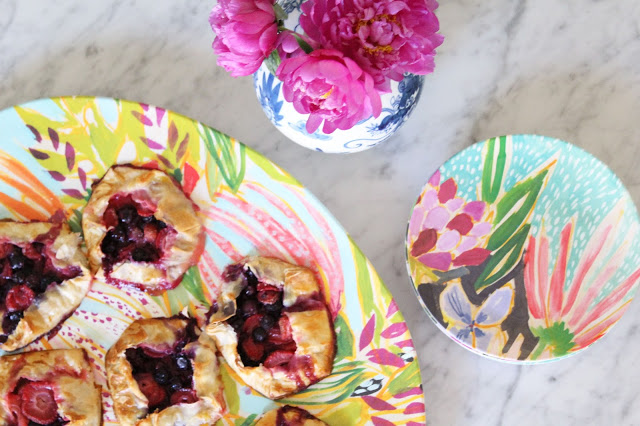 I have been on a real berry kick lately, mostly because of our recent strawberry picking adventure.  I’m also pregnant and love my carbs a little too much right now, so I searched Pinterest to find a good way to merge the two.  We are getting packed up for our move next week and I’ve also been trying to clear out the fridge and pantry, so I decided this was the perfect time to use up some frozen phyllo sheets left over from Thanksgiving’s baked brie.
I’ve seen galettes (flat pies) made on Food Network plenty of times, so I decided to look for a simple galette recipe to make.  I stumbled upon this delicious one from Ree Drummond (aka The Pioneer Woman).  Let me tell you, it is easy, delicious and beautiful…three things that are important to a pregnant toddler-mom who likes a pretty Instagram photo 🙂  I switched things up a bit and used phyllo sheets instead of pie crust and flour instead of cornstarch (because that’s all we had) but it was still amazing.  I think they probably got a little soggier than they would have if I had used pie crust, but it didn’t detract from anything.  Add a dollop of whipped cream and you have a perfect dessert for company…or just for yourself. 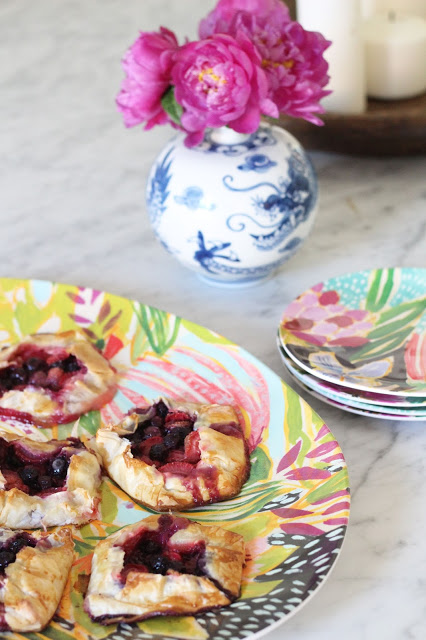 I found these beautiful melamine plates at Anthropologie and bought a few since I know we will be eating outside a lot in Hawaii.  There are 4 different patterns, as well as a several serving pieces, and I had a really hard time deciding which ones to buy.  I settled on 4 large white patterned plates,  two of the small coral plates, two of the small chartreuse plates, and the serving platter.  They all mix and match really well together, and I can’t wait to throw a dinner party outside in our new home so I can use them!