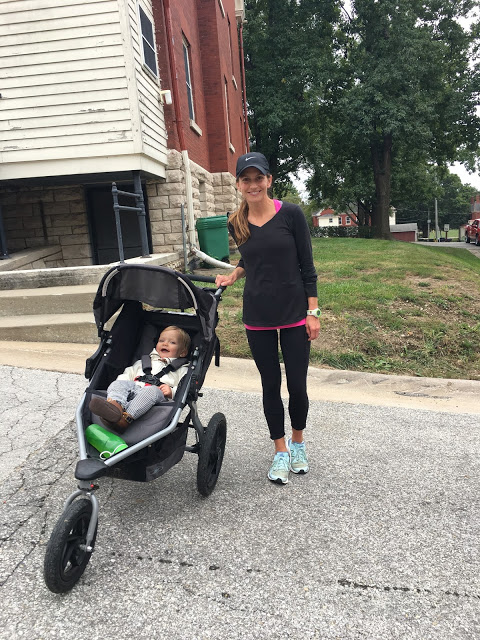 Happy Friday folks!  I figured I’d share a little marathon training update with you here since I haven’t in a while and my race is in EIGHT DAYS!  In case you missed it, I’ve been training for the Kansas City Marathon for the past 15 weeks and it’s almost show time!
I share photos on Instagram Stories before and after most of my runs, but I haven’t really talked about the struggles I’ve had over the past two months or so.  To say that my motivation has waned would be an understatement.  I missed 3 critical long runs in 4 weeks (one 18 miler and two 20 milers) due to traveling, sickness and an overall lack of discipline and motivation.  Decided to run a marathon is always an overwhelming endeavor (training for 4 months is daunting no matter how dedicated you are), but deciding to run one with a baby was probably not the smartest thing in the world to do.  I’m glad I’m doing it, but in retrospect it’s a bit more difficult than I had anticipated.  It has just been too easy to make excuses and to slack on my training.  For example: “Jack had a bad night so I didn’t get much sleep” or “well, I don’t want this run to cut into his nap time soooooo…” or “I just don’t feel like pushing the dang stroller for 8 miles today.”  See what I mean?  It’s too easy!  I’ve also been going to physical therapy for my right hip twice a week.  While helpful, each visit takes up over 2 precious hours of my day, and sometimes we just can’t get our act together beforehand, and if I don’t run in the morning it pretty much isn’t going to happen.  I think I’ll easily break 4 hours on the race (I’ve run 4 marathons and my best time is 3:40 and my worst time is 3:54) but I just don’t know if I’m going to be able to get another personal record.  I would looooooove to qualify for Boston (3:35 or better), so that’s what I’ll be going for, but I really have no clue how it will all turn out.  I’ve buckled down the past 3 weeks and have gotten in every single run that I was supposed to do (most of that with Jack and the jogging stroller) so I’m strong, light on my feet, and have covered lots of miles, I just haven’t done as many of the long runs as I should have and I did pretty much no speed work or cross training.  We’ll see how it goes!