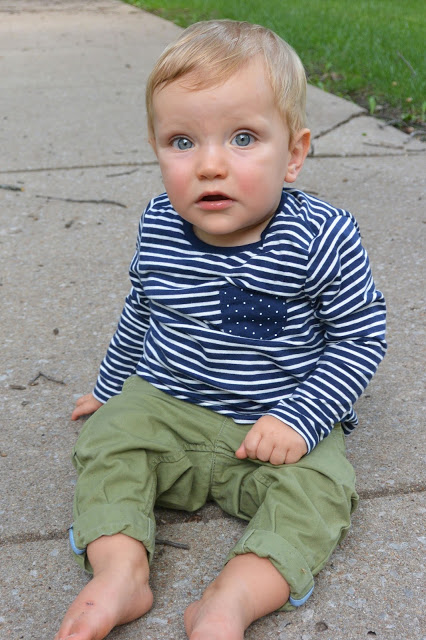 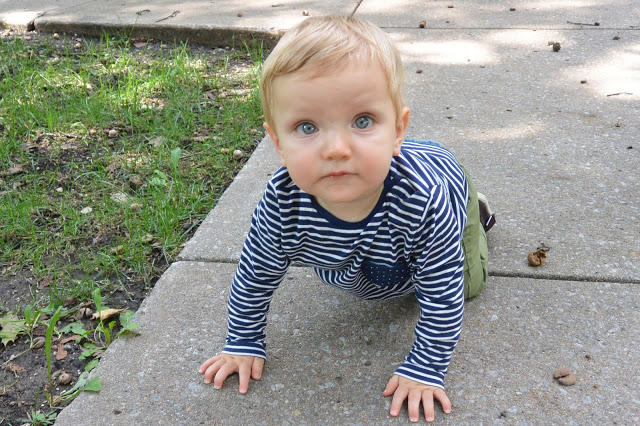 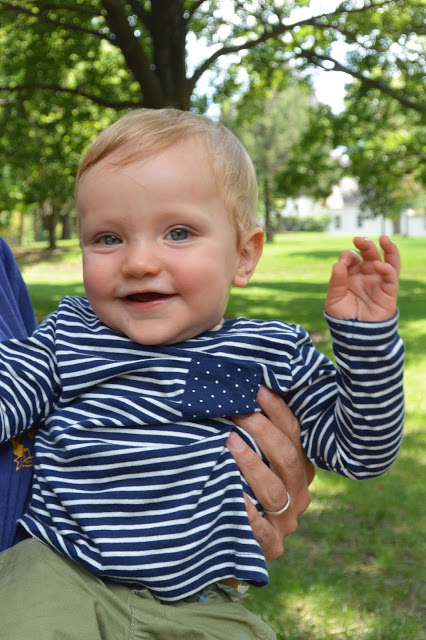 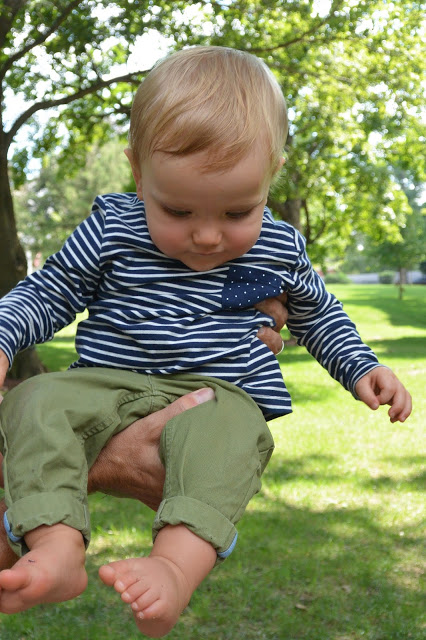 How on earth do I have a 10 month old?  Jack turned 10 months old on September 2nd and he is such a busy little guy.  He crawls very quickly and pulls up on everything.  He learned to clap and wave at the end of August and now he waves at everybody as well as his own reflection.  It’s so stinking cute.  I know all babies go through these milestones but it sure is fun when it’s your own child.  Jack also imitates people now.  If you clear your throat he’ll mimic the noise, and if you move your lips like a fish he’ll do the same thing.  He also likes to point at things.  We attended a family reunion in Georgia over Labor Day Weekend and he was very social and happy with anybody holding him (as long has he wasn’t hungry or sleepy).  He still loves pretty much all foods although sometimes he will refuse avocado and he still hates bananas.  Our flight from Kansas City to Georgia went well but he was so stimulated that he couldn’t take a nap…which made for a very long trip for this momma.  Thankfully my seat neighbors were nice and they helped entertain him.
Jack learned how to play peekaboo this past month and will play it with anything: a towel, sheets, his bib while he’s wearing it, a tiny piece of paper…it’s pretty funny.  He gets so excited sometimes that he holds the item all the way over his head so you can see his face, but he still pulls it down and you have to act surprised.  It makes me laugh so much!
Jack STILL has no teeth.  He’s been pretty drooly lately though and he’s showing some other teething signs, so maybe he’ll have one by the time he’s 11 months old.  We’ll see.
As for nursing, it is still going well although my supply isn’t what it once was.  He’s so busy during the day that he’s often not all the interested in sitting still and nursing.  I have to go to Wisconsin for a week starting on Sunday (Army Reserve duty) and I just don’t have enough pumped and frozen to carry him for the week, so we’ve given him a few bottles of formula just to make sure he likes it.  Well, turns out he loves it…which is a little insulting to me, but it also makes me feel better about only leaving enough breast milk for one or two bottles a day.  My goal had been to never give him formula his entire first year, but sometimes life throws you curveballs and you just have to adapt.  I’m planning on pumping while I’m gone because I want to continue nursing once I get back, but I am unsure about what to do with the milk.  Has anybody flown with frozen milk before?  I have to stay in military barracks and I don’t think there will be a freezer, so I’m anxious thinking about the logistics of it all.  Thinking of pouring it out makes my heart hurt because that stuff is liquid gold!  I really want to bring it home so I may bring a cooler with me and find some dry ice for the flight home.  I’m assuming Delta will let me check it??  Any suggestions would be greatly appreciated.