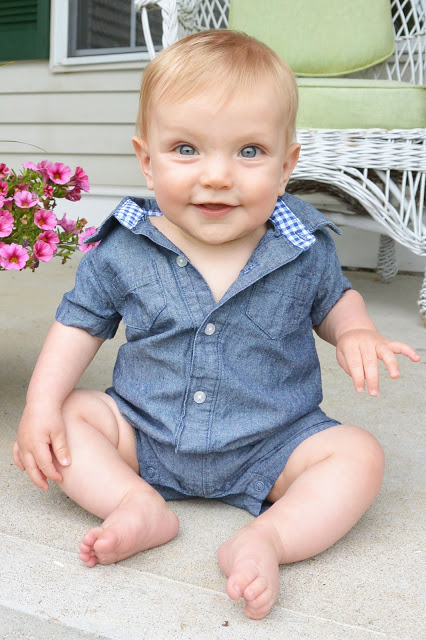 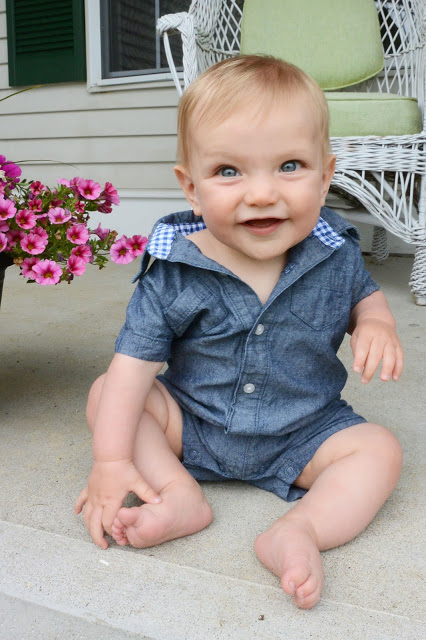 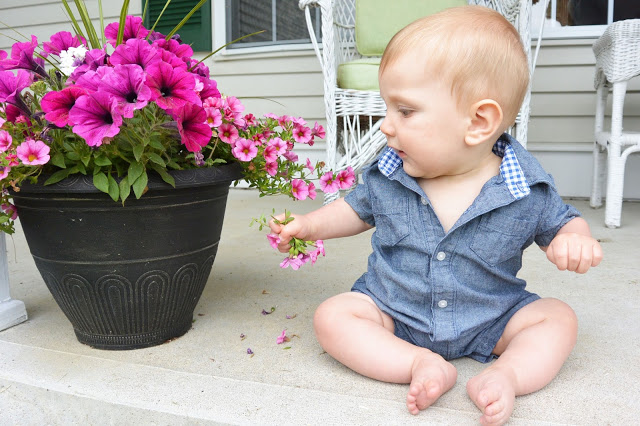 Jack is 7 months old now!  I can’t believe he’s closer to 1 year old than he is to the day he was born.  It makes me want to cry!  His little personality just gets funnier every day.  He’s a bit of a wild man and he makes us laugh all the time.
Development:  Jack has been trying to crawl for a few weeks but doesn’t really get anywhere yet.  I think he will be mobile before we know it though and I’m going to have to do a good job of baby proofing our next home.  He is pretty good at sitting up now and doesn’t fall over all that often.  He mastered putting his pacifier back in his mouth about a month ago and that’s really nice especially at night time.  He hasn’t tried to pull up yet and is not showing any signs of getting teeth.  As all babies this age, he tries to eat everything!
Food:  Jack has become quite the foodie.  He LOVES to eat and has a really hearty appetite.  I make all of his food unless we are traveling, and then I’ll buy those little food pouches.  He eats oatmeal for breakfast but only if you put peanut butter in it, as well as some pureed fruit like mango or pears.  I normally cut the mango with some avocado to take away some of the tartness.  For lunch and dinner he has veggie and fruit purees.  I often make a puree of sweet potatoes, chick peas and butternut squash and he really enjoys that.  We often give him actual pieces of food that he tries to eat himself but he normally just ends up a big mess.  Once his fine motor skills get a bit better I’ll probably ease away from the purees and go more with the baby led weaning technique.
Height/Weight:  Jack had been very high on all of the percentile scales until his 6 month appointment.  He was in the 70’s and 80’s for all three measurements (height, weight, head circumference) at his 4 month but at 6 months his weight dropped down to 38th percentile yet the others were still in the 70’s and 80’s.  I had been nursing him every 4 hours or so but he would get fussy at the end of each breast because it seemed like he didn’t want to work to get the hind milk.  He weighed 16 pounds 15 ounces which isn’t tiny but the fact that the percentile dropped so greatly really concerned me.  I made it my mission to fatten him up this past month and I think I’ve succeeded!  He gained almost 3 pounds in a month and he’s just under 20 pounds now!  I still nurse him every 4 hours and he also eats 3 meals a day.  He has gotten better at nursing for longer amounts of time so I think he’s getting more of the fatty hind milk now.
Sleep:  Jack has kept us on our toes lately.  His naps have gotten longer but nighttime is hard!  We put him down between 7 and 7:30PM (and he sometimes cries a lot when we put him down now which he hasn’t ever really done before) and he wakes up around 2 or 3AM to eat and then he’s up for the day before 6AM.  We have been traveling a lot lately so I don’t blame him.  All things considered he’s very flexible and adaptable and he’s a great little traveler.
We are starting our drive down from Maine to South Carolina today so that we can visit my family at the beach.  I can’t wait to take Jack to the beach and let him play in the tide pools.  Month 8 with baby Jack is sure to be lots of fun.