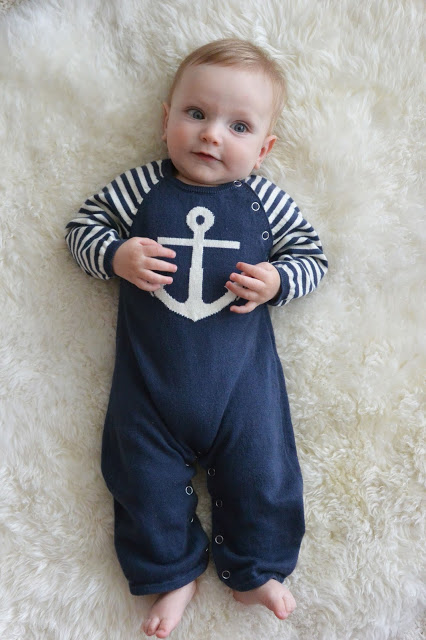 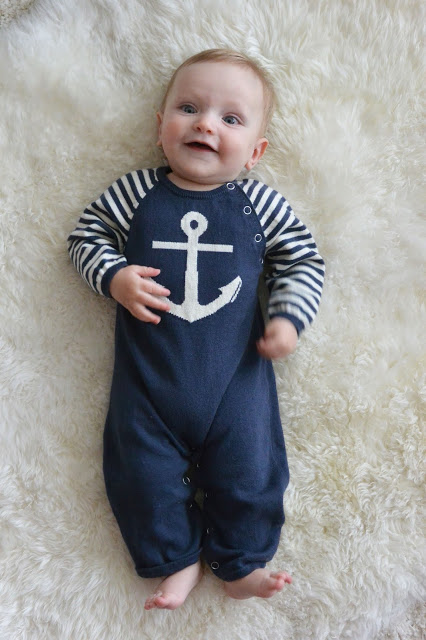 Jack is 6 months old today!  I realize that I haven’t actually shared any other Jack monthly updates here but I figured I’d go ahead and start now.  Instagram has been my go-to for sharing Jack news but I’m going to try to get better about sharing a little of it here.
Development:  Jack is the happiest baby boy and he is bright-eyed and curious about everything.  He has become pretty mobile in the past few weeks and he rolls around on the floor pretty effortlessly.  He can’t crawl or sit up yet, but I have a feeling that should happen fairly soon.  He pulls his little knees up under him when he is on his belly but he doesn’t quite realize that he needs to push off with them in order to move forward.  We have a Graco jumper and Jack is absolutely crazy about it.  We sometimes put a mirror out in front of him and he just bounces and admires himself until he gets bored and wants to get out.  He enjoys reading but his favorite part is hitting the pages.  He really loves slapping and banging on things.  He is such a boy!
Food:  I am still exclusively breastfeeding and Jack is such a great nurser.  He will take a bottle but does a better job with Tom than he does with me.  I rarely pump though because I’m with him almost all the time.  It’s just so much easier for me to feed him when he’s hungry, especially now that we have mastered nursing in public.  My plan had been to wait until he was 6 months old to start him on food, but he began showing interest in our food when he was 4 months old and I finally let him try it when he was 5 months old.  I think the novelty wore off pretty quickly though.  I think he was hoping it would all taste like breast milk haha.  He was ravenous and excited about food the first two or three times, but now he would rather just slap on the highchair tray or play with his bib.  I’m sure he will come around soon enough though.  He tried rice cereal mixed with breast milk a few times (I’m too lazy to pump so we gave that up pretty quickly), sweet potatoes (baby led weaning style and pureed), avocado, banana, butternut squash and carrots.  We haven’t been all that consistent with feeding him solids but now that he is 6 months old I am going to try to stick to a meal schedule.  I think we are going to give baby led weaning a shot but I may do purees until he is less distracted.  He was very interested the first time we handed him a big piece of sweet potato, but all the other times he was more interested in throwing it on the ground or squishing it.
Height/Weight:  As for height and weight, we have his 6 month doctor’s appointment later today so I’m not entirely sure how big he is.  Last I checked he was 17 pounds and 27 inches, but that was 2 weeks ago.  He’s pretty long and lean although his thighs are chubby and adorable.
Sleep:  Jack goes to bed around 7PM every night and normally goes down without a fight.  For the past 2 months he has been waking up hungry between 4 and 5AM and then he goes back to sleep until 7:30 or so.  He’s not the best napper but he normally takes 3 naps a day that normally last around 45 minutes.
We are going to Florida later this week so Jack will soon experience his first flight.  He is pretty low key and happy most of the time so I’m not overly worried about it.  I may wind up eating my words though, so stay tuned.
I can’t believe this sweet boy of mine is half a year old!  I know all moms say it, but time is flying by and I wish I could slow it down so that I could fully savor every precious moment.
Outfit: Toobydoo