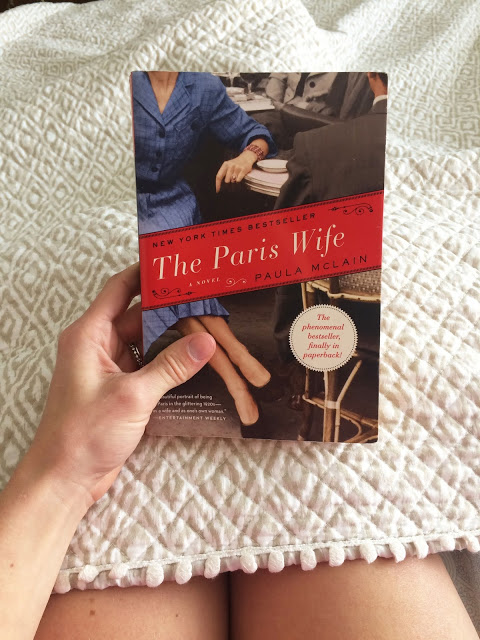 Does anyone else have at least one or two books going at the same time?  I love to read and always enjoy the escape that a good book provides.  I don’t finish books all that quickly because normally I just read before bed, while traveling, or when sitting outside or on the beach, but I did managed to read quite a few books last year and I figured I’d share them with you!  (I also read many pregnancy books, but I already wrote a post on those so I’m not including them here.)  My interest in books is fairly broad, so you’ll see a little bit of chick lit, some historical fiction, and even a “techno-thriller” on the list.  Let me know what you think of my choices, and if you have any recommends on what I should read next I’d love to hear them!
All the Light we Cannot See by Michael Doerr.  I read this while we were in Paris and it made occupied France all the more imaginable and real.  This is a powerful story of a blind French girl and a German boy whose paths collide in occupied France during WWII.  The blind girl, Marie-Laure, is raised by her loving father who works at the Museum of Natural History.  He builds a perfect, miniature replica of their Paris neighborhood so that she can learn to navigate the area on her own.  He is taken by the Nazis after they flee to Marie’s eccentric uncle’s home on the coast of France, and Marie must survive bombings, food rationing, curfews and the eventual taking of the city by Nazis.  The German boy is a brilliant prodigy who happens to be an orphan after his father is killed in the neighborhood coal mine.  His talent with radios is noticed by the Nazis, and he is given the opportunity to attend the academy for Hitler Youth.  He becomes a Soldier in the German Army and must carry out his brutal orders all over Europe.  Their paths eventually cross toward the end of the war, and the way their stories overlap is fascinating.  This is a page turner that you don’t want to miss!  It isn’t the happiest of books but it left a profound impact on me and it made many of the big summer reading lists for a reason.
Micro by Michael Crichton.  I had never read a book by Crichton before (author of Jurassic Park), but my mom gave this book to my husband last year so I decided to pick it up.  The first 100 pages are painfully slow, but I’m glad I stuck it out because it was worth it.  The book takes place in Hawaii and centers around a corrupt company that has found a way to shrink humans down to microscopic size.  A group of student scientists gets brought to the island to help with a project, but once they stumble upon a secret that the company doesn’t want to get out, they are shrunk down to ant size and must survive the harsh, natural world and all that comes along with it.  This is the “techno-thriller” book I mentioned above, and if you can get through the first 100 pages you’ll really enjoy it.
Save the Date by Mary Kay Andrews.  I confess, I read chick lit from time to time…and Mary Kay Andrews is always my favorite chick lit author.  All of her books take place in the South, so it’s always a welcomed taste of home whenever I pick up one of them.  I just finished Save the Date, which takes place in Savannah and is about a florist named Cara.  She arranges flowers and plans weddings for Savannah’s high society families, but suddenly a competitor arrives from Charleston and he is dead set on ruining her business and life.  This is a fun, light book that you’ll breeze through quickly!
The Invention of Wings by Sue Monk Kidd.  This is a fantastic book that starts in Charleston, SC back in the early 1800’s.  It switches between 2 narrators: a young slave girl named Handful, who is owned by a prominent Charleston family, and Sarah, the middle daughter of that family.  The book takes you from early on when Handful is presented to Sarah as a gift on her birthday (she rejects the “gift” and declares that she wants to set her free), all the way to the abolition of slavery.  It’s loosely based on a true story and it was one of my favorite books I read last year.
The Paris Wife by Paula McLain.  If you find Ernest Hemingway fascinating then you need to read this book.  It is a fictional story told from the point of view of his first wife, Hadley.  It takes you on a journey through their love, Hemingway’s struggles, their life in Paris, and the eventual eroding of their marriage.  It was a heartbreaker that I skipped meals while reading simply because I could not put it down.  We went to Paris shortly after I finished reading this book, and it was neat to imagine them walking the streets and visiting the bars and restaurants.
The Summer Girls by Mary Alice Monroe.  I read this book this summer while I was at the beach in the South Carolina Lowcountry.  It takes place in the Charleston area and it’s about a grandmother who tries to reunite here 3 grown granddaughters one summer.  It delves into their pasts and why their relationships crumbled.  This is another chick lit type book and is especially fun as a beach read.  It’s the first book of a 3 part series, but I have yet to read the other two books.  I’ll probably read them this summer at the beach when I’m not tending to a sand-eating 7 month old baby boy 😉