I found an amazing treasure at Salvation Army a while back.  (At this point it was about a year ago and I just recently got around to taking the “after” photos…I’m the worst, I know.)  It’s a 1960’s faux bamboo window bench!  It’s in perfect condition, has gorgeous fretwork, and it was a steal!  If you remember, I have a huge obsession with anything faux bamboo, so this was such an exciting find.  I’ve seen the same one for well over $1,000 on many different websites, so I’d call this a definite success.  The bench cushion (that isn’t even attached) was this yucky orange and green striped pattern, and I have a feeling that that’s why someone got rid of it. 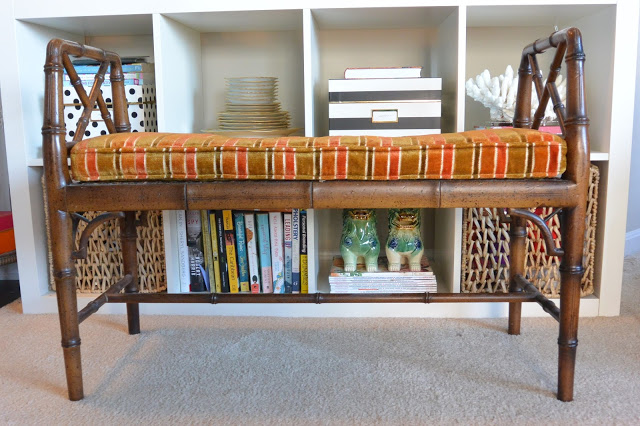 I thought about painting it white or gold, but after much internal debate I decided to keep it natural.  There is something to be said for natural wood sometimes, so even though it doesn’t have as much of a “pop,” I knew it would look amazing as long as I chose the perfect cushion fabric.
At first I bought some colorful Aurora Ikat fabric, but eventually I decided that it wasn’t sturdy enough and may be a little too bold.
Don’t worry though, this fabric will go to great use somewhere else in my home.  Probably as pillows.
Remember how I decided against the palm leaf fabric for my highback chairs?  (I blogged about it here.)  Well, I decided that this bench would be the perfect way to incorporate that fabric in my home.  It’s made by Tommy Bahama and is called Waverly Swaying Palms.  I went ahead and paid to get the cushion made because I was not about to attempt it myself…I can handle a slip seat but I haven’t quite gotten the confidence to try anything more difficult.  The upholsterer ended up just creating a new cushion for me because the foam inside the original cushion had turned to dust.  I also had them use some white linen for the piping for a little added contrast.
Here is what the bench looks like now: 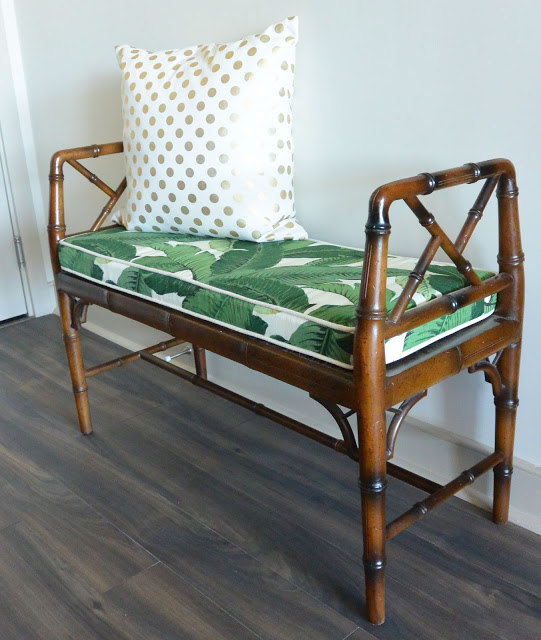 I’ve always wanted to have a bench in my entryway, and now I finally do!  Even though it’s a little cramped I love how it looks.  Plus now that I’m super pregnant it’s nice having a spot to sit down so that I can put on my shoes without having to forfeit breathing. 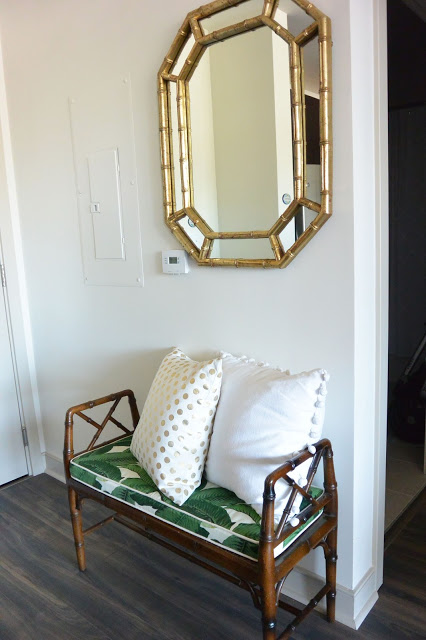 I hung the vintage faux bamboo mirror I found a while ago over the bench.  I still may paint it (one day), but for now the distressed gold finish is working just fine.  Now if only I could move the awkwardly placed thermostat…
Such a transformation, right?  Gosh I love thrifting.  It’s addicting when you keep finding good pieces like this for such a bargain!  Have any of you had good thrifting luck recently?  I’d love to hear about it!