Back in May I shared with y’all one of my most amazing thrift store finds ever: a set of 7 rattan Chinese Chippendale chairs.  (I blogged about it here in case you missed it.)  I paid $39.95 for the entire set, and then they sat on my lanai for the next 3 months because I couldn’t muster the energy to work on them.  You see, they are rattan and the cane wrapping on many of the joints was either missing or in really bad shape.  I put off fixing them up because I was intimidated.  Intimidated by the idea of fixing the wraps myself, and intimidated by the thought of painting them because I was not happy with the job I did on the Greek key dining chairs I worked on last year.
I finally decided to tackled them in mid-August right before our move to the new apartment.  First, Tom scrubbed them in the bathtub with bleach and water to get all the gunk off.  The chairs looked like they had been left outside for a few years by the previous owner so a thorough cleaning was absolutely necessary.  I also didn’t want to paint over any dirt or spiderwebs if I could help it.
I decided against sanding them.  It was probably a risky decision, but after studying the wood and the original paint job I just didn’t think that sanding would make any difference.  I wouldn’t recommend not sanding normal wood, but I’ve come to the realization that rattan furniture is a bit different and doesn’t require sanding if you use good spray paint.
Next, I started on repairing the cane bindings.  Most standard rattan joints have binding that is 1/4″ wide.  (Make sure you measure though, just to be sure.)  I didn’t want to waste money and order too much, so I decided to start with just two 20 foot packets of binding cane that I ordered off of Amazon.  It’s really affordable at just $4.99 per package, so I wouldn’t have been out too much money if I had drastically overestimated how much I needed.  Turns out, I ordered almost exactly the right amount.  I had 41 joints to repair as well as the side of one of the seats.  With 40 feet of cane binding I was able to repair 40 joints and the side of the seat.  I completely missed one of the joints and only realized it as I started painting.  I decided to go ahead and paint it anyway, and now that the chair is painted you can’t really tell that anything is missing.  (That’s what I’m telling myself, anyway.)
Many of the bindings were already missing and lots were broken or extremely damaged.  I removed all of the broken and damaged ones, and kept the ones that were in good condition.  I was all ready to start work on the bindings when I realized you MUST soak the cane overnight first.  This makes the cane much easier to work with and it won’t snap in half as you try to bend it around a round surface.  I put all of the caning in a large tupperware and filled the whole thing up with water.  After sitting in water overnight the cane was much more malleable, and I was finally able to get started.
My particular chairs had marks on them from the original cane bindings.  This made it easy because I just followed the markings like guidelines, and I also made sure my binds matched the other binds.  The actual wrapping of the joints wasn’t nearly as difficult as I had expected…it was just really time consuming.  It took me about 3 hours to finish all of the repairs.
The original cane bindings were secured with small staples.  I couldn’t find narrow staples at Lowe’s (or a staple gun that would hold narrow staples for that matter), so I ended up buying a Power Shot staple gun that could also shoot brad nails.  I used 5/8″ brad nails, and they worked like a charm.  My one complaint is that I had a hard time seeing where I was nailing, but that’s just because the cane was so narrow and the head of the stapler was rather wide.  The cane split a few times, but for most of the joints I only needed one single brad to finish up the binding.  (No need to nail the beginning of the binding…just make sure you loop the cane over itself to secure that end.)
For the side of the seat that I had to repair I simply cut individual strips rather than looping one long piece around and around.  I didn’t want to completely remove the seat so I nailed both ends of each individual strip to the chair.  It doesn’t look “perfect,” but eventually I’ll have cushions made so you won’t even be able to tell.
After repairing all the binds I FINALLY got to painting!  I used white Rustoleum Universal Satin Paint and Primer In One spray paint.  It worked really well, didn’t drip at all and I’m really glad I decided to use this rather than the Valspar Laquer spray paint that I used on my Greek key dining chairs.  I applied 2 coats of paint on each chair, and it took 12 cans to get the entire job done.
Next, I applied 2 coats of Rustoleum Crystal Clear Enamel, and I wiped the chairs down with a rag between coats because it seemed to create a bit of residue when it dried.  It took 5 and a half cans to finish all 7 chairs.  This stuff really is amazing and it creates a tough and shiny finish.
This is what they look like now: 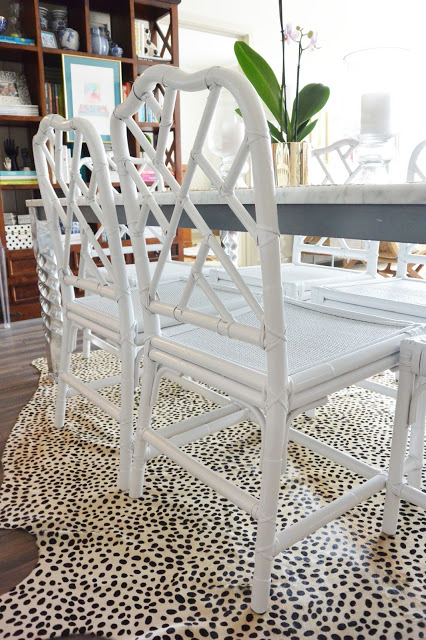 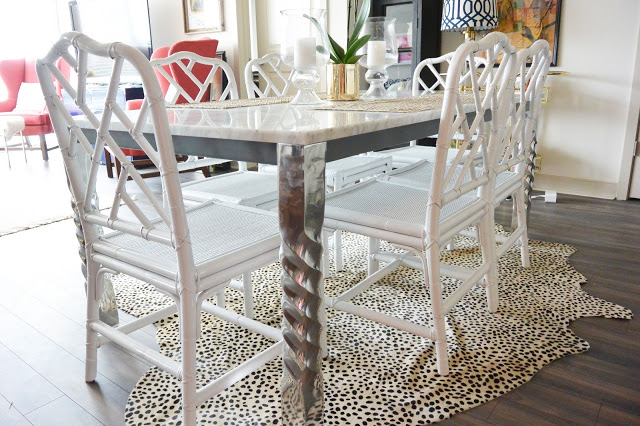 Such a transformation, right?  I’m totally in love with them and so happy with how they turned out. 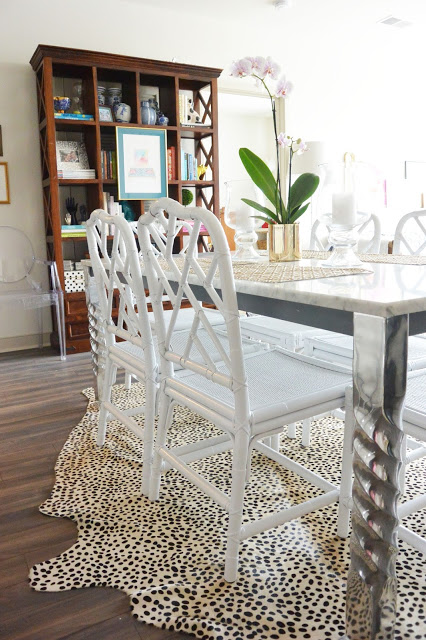 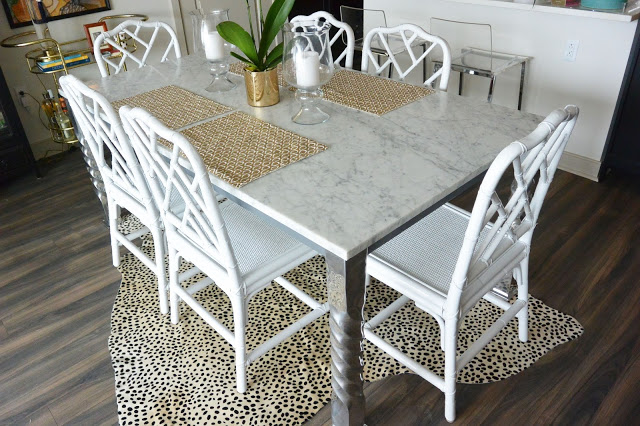 They required a whole lot of time and effort, but for $39.95 plus paint and binding cane it was absolutely worth it.  I will likely get cushions made for them sometime in the future, but for now they work just fine.
If you have any questions about repairing rattan joints please let me know and I’ll try to help!  I am by no means an expert, but I definitely learned a lot by trial and error 🙂