I’m about to share a heartbreaker of a story with you guys.  It happened this past weekend and I have not slept soundly ever since…ok so I’m talking about a dresser and it shouldn’t be that big of a deal (that’s what my husband says), but it is!
Last Saturday morning I drove back from DC to Columbia.  Tom was down there for work so I spent a few days with him for a little change of scenery.  On my drive home I stopped by Goodwill to donate some stuff that I had in the back of my car.  I’ve been going to this one particular Goodwill for over a year now and I have yet to find anything good.  That is, until this fateful Saturday.
I dropped off my donation and then went inside to browse.  I found this campaign dresser, and even though it was tempting (at just $40) I took a picture of it and told my husband that I was resisting the urge to buy more furniture…and he congratulated me on my efforts.  Here is what the dresser looked like: 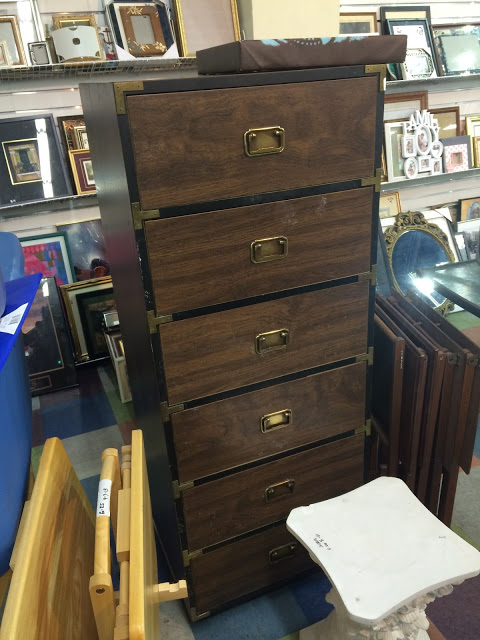 I decided against buying it for a few reasons: 1) I told my husband that I’d try to stop buying used furniture.  2) I didn’t think it would fit in my car (not that that’s ever stopped me before).  3)  The drawer pulls aren’t the traditional recessed campaign hardware that I’m used to, so I wasn’t fully convinced that it wasn’t just a cheap knockoff.  Plus it didn’t have a manufacturer’s marking.  4)  It was not in great shape, desperately needed a paint job (I have no place to paint anymore), and some of the veneer was damaged on a few of the drawers.
I walked out of the store but could not stop thinking about that dang dresser for the next 3 hours.  I’ve needed to replace my broken Ikea dresser for 2 years now, and this piece would have been perfect.
After doing a little digging on Instagram (because I like to torture myself, apparently) I found the EXACT SAME DRESSER redone in both white and navy…and it looked AMAZING!
I immediately called Goodwill and the lady went and checked to see if it was still there.  It was, so I jumped in my car drove straight there.  Well, wouldn’t you know that as soon as I walked in the store a lady bought it.  I even offered her $50 for it, which she didn’t take.  She said she had just bought a new bedroom set and that it was going to look good in her bedroom.  I’m pretty sure it would have looked better in my home, but she won fair and square.  I should have asked if I could buy it over the phone when I called, but hindsight is always 20/20, right?
I left the store devastated, and I have since vowed to never listen to my husband again.  At least when it comes to vintage furniture matters.  I’ve never really listened to him before when it came to my habit of acquiring used things, and I have absolutely no clue why I decided to start when I did.  (I’m not blaming him…I accept full responsibility for bringing this tragedy upon myself.)  It was only $40!!!!  I should have snagged it!  He says that he’s sure I’ll find something even better now.  I’m not convinced.
Have you ever let a piece get away and then have it haunt your thoughts and dreams for the following week?  Please tell me I’m not alone.  I’m sure this is common for those of us who thrift, but this is the first time I’ve ever let a piece get away, and I’m not sure I’ll ever fully recover.
Note: Clearly I’m being melodramatic in this post.  I know it’s just a dresser and in the grand scheme of things it’s not a big deal.  I am pretty bummed though!